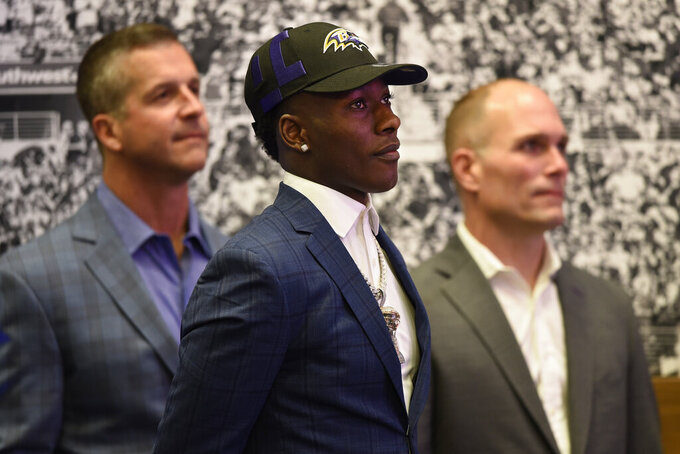 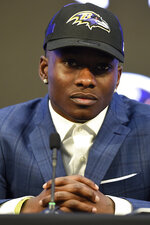 OWINGS MILLS, Md. (AP) — Baltimore Ravens general manager Eric DeCosta entered his first NFL draft with a long list of needs, eight picks and the pressure of measuring up to a man who traditionally flourished during this three-day event.

It's too early to determine if DeCosta will fare as well as Ozzie Newsome, who built two Super Bowl winners over a 23-year run. It will also take a while before DeCosta's first draft can be legitimately assessed.

Still, the 48-year-old rookie GM addressed each one of the team's most notable voids — receiver, pass rusher and interior offensive lineman — with confidence while absorbing the advice of Newsome, coach John Harbaugh and college scouting director Joe Hortiz.

"We got a lot accomplished," DeCosta said late Saturday afternoon. "We added a lot of speed, we added some playmakers, we added some big guys. I think we helped our football team quite a bit."

The Ravens needed a receiver after losing John Brown and Michael Crabtree to free agency, so DeCosta picked Marquise Brown with the 25th overall selection and backed it up by taking Notre Dame wideout Miles Boykin in the third round. Two receivers in the top three picks may seem excessive, but the burly Boykin and the diminutive Brown add different elements to a passing game that must improve if Baltimore is to repeat as AFC North champions and make a deep playoff run.

"The bottom line is, these are two really fast guys that make plays," Harbaugh said. "And that's what we were looking for."

Eager to fill the hole left by the departure of sack specialists Terrell Suggs and Za'Darius Smith through free agency, DeCosta drafted Louisiana Tech defensive end Jaylon Ferguson, who happened to break Suggs' FBS record with 45 career sacks. Ferguson could start in the season opener against Miami on Sept. 8.

During the final day of the draft, the Ravens added speedy running back Justice Hill of Oklahoma State, 310-pound offensive guard Ben Powers of Oklahoma and Penn State quarterback Trace McSorley, the team's final pick of the draft (at No. 197 overall).

"Trace McSorley was kind of a sleeper pick for us," DeCosta said. "We brought him in as a quarterback but he's got the potential to do some other things, too. This is a great spot for him."

Lamar Jackson is the starter and Robert Griffin III is the backup, leaving little room for McSorley. That didn't temper his delight of being selected in the sixth round.

"Being in the NFL has been a dream of mine since I was a little kid," McSorley said: "My goal is to come in and play the quarterback position. But I can do a lot of different things on the football field."

So can the seven other players that DeCosta drafted.

"There were some things that we needed to build our team up," Harbaugh said. "We got guys that fit us personality-wise, need-wise and talent-wise. I'm really happy with the way our roster looks now compared to three days ago."

Some other things to know about the Ravens' 2019 draft:

After getting Brown on Thursday, DeCosta snagged Ferguson and Boykin in the third round Friday before taking five players Saturday. The flurry began with Hill and Powers, followed by Southern Cal cornerback Iman Lewis-Hill, all in the fourth round. Texas A&M defensive tackle Daylon Mack was taken in the fifth round, followed by McSorley.

Baltimore really didn't need a third quarterback, but McSorley was impressive in his workout at the team facility. "He's our kind of guy," Harbaugh said. "He's gritty and tough, and that's what we look for."

The Ravens appear to be collecting players from Oklahoma. After drafting former Sooners Mark Andrews and Orlando Brown Jr. last year, the Ravens grabbed Brown and Powers from Oklahoma and added Hill out of Oklahoma State. "There are a whole bunch of Oklahoma players up there," Powers said. "It's going to be a lot of fun."

DeCosta isn't done yet. His to-do list includes getting a middle linebacker to replace the departed C.J. Mosley.

"We're just starting out this offseason," he said before the draft. "As Ozzie used to say, 'We don't have to play games in April. We wait until September. I believe we'll have a good, competitive, hard-nosed typical Ravens team on the field when we start."

He added: "We have a history of doing well in undrafted free agency."

By Cliff Brunt 53 minutes ago
By Juan A. Lozano an hour ago
5 hrs ago
By Arnie Stapleton 13 hrs ago
22 hrs ago