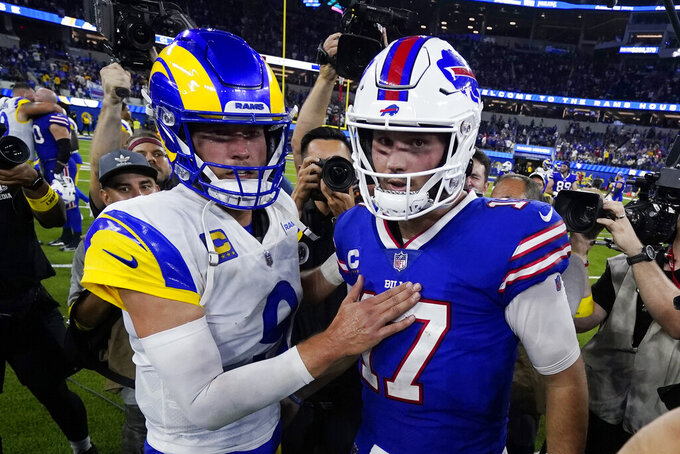 INGLEWOOD, Calif. (AP) — Sean McVay knows that one of the prices of longevity in the NFL is that eventually he's going to experience a lot of good and bad things as a coach.

He hasn't had too many bad experiences, but Thursday night was definitely one of them.

The Rams' 31-10 loss to the Buffalo Bills was the first time in six openers that McVay has been on the losing end. Reporters could hear McVay yelling at his team, including a couple expletives, after the game because only a retractable door separates the locker room from the post-game interview room.

There was a reason why McVay was incensed. It's only the fifth time the Rams have lost by at least 21 points since he became coach in 2017. It was also the second-worst loss by a defending Super Bowl champion, with Baltimore's 49-27 loss at Denver in 2013 the standard.

The defeat also made McVay utter a word he has rarely used — humbling.

“It was very humbling night but one where you look yourself in the mirror and say you have to be better," McVay said. “I feel a sense of letting a lot of people down that I care about. We're going to fix this.”

The Rams had problems on both sides of the ball. Matthew Stafford was sacked seven times, marking only the third time in his 14-year career he has gone down that many times.

With the retirement of Andrew Whitworth and departure of Austin Corbett, Los Angeles has two new starters in left tackle Joe Noteboom and right guard Coleman Shelton. Buffalo didn't blitz once and one of their seven sacks came with only three pass rushers.

“Honestly, you just be a man about it. You watch it, understand what went wrong and do whatever you need to do to address the issues,” right tackle Rob Havenstein said.

Stafford, who completed 29 of 42 passes for 240 yards with a touchdown and three interceptions, said he has to do a better job throwing it sooner but also pointed out that he saw the Bills play a scheme he doesn't see too often.

“Not a lot of people play nickel safety same side cover three. It wasn’t earth shattering stuff but we haven't gotten that in a long time,” Stafford said. “I don't feel like that was a reason that we’re holding on to it or anything.”

Defensively, the Rams were lousy on third-down conversions and allowed Bills receivers to gain 114 yards after the catch. Josh Allen had completed only one pass thrown over 15 yards in the first three quarters before connecting with Gabriel Davis for 47 yards on the first play of the fourth quarter and Stefon Diggs for a 53-yard touchdown play that made it a three-touchdown lead midway through the fourth.

“I think this was humbling. Obviously, everybody’s frustrated because it's not how you want to come out,” linebacker Bobby Wagner said. “We just have to be locked in. Stuff like this happens the first couple games. It's not just one person or anything like that. We all have to play better defense.”

“It's too early to say that. We are not going to use that as an excuse,” he said. “I don’t want to take credit away from what they did.”