Defense can carry Bears even if Trubisky misses more time 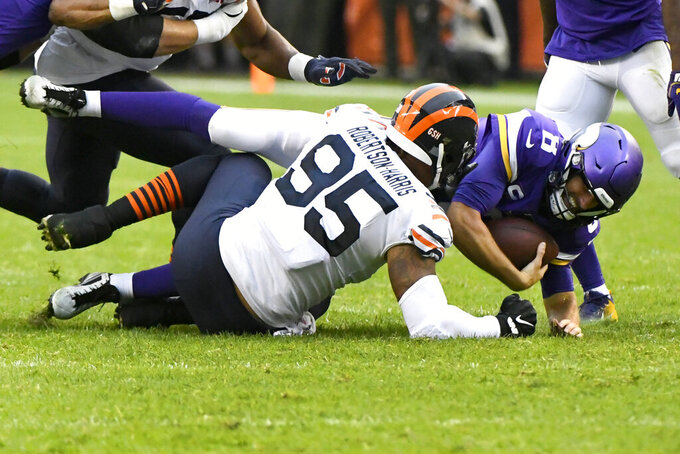 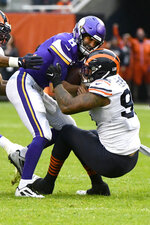 LAKE FOREST, Ill. (AP) — The Chicago Bears have yet to fully reveal the extent of damage to quarterback Mitchell Trubisky's left shoulder, or who will play the position against the Oakland Raiders Sunday in London.

It may not matter, if they're going to continue getting defensive play like they had against the Minnesota Vikings in a 16-6 victory.

The Bears remained vague Monday on Trubisky's injury or whether Chase Daniel would have to replace their starter as he did following the injury early in Sunday's game.

"Man, somebody knows more than me, huh?" Nagy said. "I don't know. We literally are going to wait for more here as we go and just see exactly where things are at."

What Nagy does know is the defense seems to work regardless of who's playing. Without starters Akiem Hicks, Roquan Smith and Bilal Nichols, they held NFL rushing leader Dalvin Cook to 35 yards and sacked quarterback Kirk Cousins six times, including two strip sacks.

"Our guys stepped up, we had some guys that really stepped up yesterday on that defensive line," Nagy said. "You go back and turn on that tape and you see some guys flying around, and I want to give credit really to all of the assistant coaches over there, but (defensive line coach) Jay Rodgers did a really good job with getting his guys ready. And that's what this is all about."

Hicks had a knee injury and was a game-time decision. Nichols has a broken hand and Smith missed for what the team called personal reasons.

Using Roy Robertson-Harris and Nick Williams on the line didn't hurt the Bears, as they combined for 3½ sacks Sunday, and linebacker Nick Kwiatkoski had a strip sack and led them in tackles as Smith's replacement.

The Bears haven't allowed more than 15 points in a game this season and have given up 17 points or fewer to their last eight opponents.

Mack has a team-high 5½ sacks and his four forced fumbles is tied for the NFL lead.

Little-known reserve Nick Williams has four sacks in the last three games as part of the defensive line rotation.

"We're feeding off each other and feeding off the fans," Williams said. "Everybody wants to get to the ball. We want to be a dominant defense."

Chicago's running attack hasn't lived up to expectations. They ran for 72 yards on 33 carries Sunday, and Nagy said the run blocking has to improve.

"I just feel again we're feeling things out and every week," Nagy said. "It's a little bit different of a (blocking) scheme but I like where we're at. I know we can improve and I think we will."

Chicago is averaging 90.2 yards rushing per game and is in the bottom 25% of the league. Rookie rushing leader David Montgomery is averaging 50 yards a game.

Daniel's 22-of-30 effort for 195 yards included his fourth touchdown throw with the Bears, a 10-yarder to Tarik Cohen. He started two games and had three TD passes last year when Trubisky suffered a shoulder injury against Minnesota.

"That's the one luxury that we have is having Chase," Nagy said. "He knows the offense really, really well. He's really like a coach out there. He can fix any mistakes that I have. Even if it's just communication, he's able to handle that. He did that a couple times yesterday.

"If he's who ends up playing, then we feel very comfortable."

Nagy said the Bears would consider activating Tyler Bray from the practice squad as backup if Trubisky is unable to play.

Wide receiver Anthony Miller had two receptions for 15 yards Sunday and has just four catches on the season. The Bears were hoping he would step up with Taylor Gabriel sidelined because of a concussion. Miller led the Bears in TD catches with seven as a rookie last season.

Kyle Long (hip) and Akiem Hicks (knee) were close to being able to play on Sunday during pregame warmups, and the Bears are hopeful both will return. Also, Gabriel is still in the concussion protocol after missing the Vikings game. Kicker Eddy Pineiro went 3-for-3 on field goals despite playing with a pinched nerve in his knee.

7: Wide receiver Allen Robinson made seven receptions Sunday, his second seven-catch game of the season. He has a team-high 280 yards receiving on the year.

The Bears (3-1) travel to London to face the Oakland Raiders (2-2), the team that traded Mack.

Then he laughed and told reporters to look elsewhere to hype a grudge match.

"There's not gonna be no talking," Mack said. "I'm not going to give you what you want."