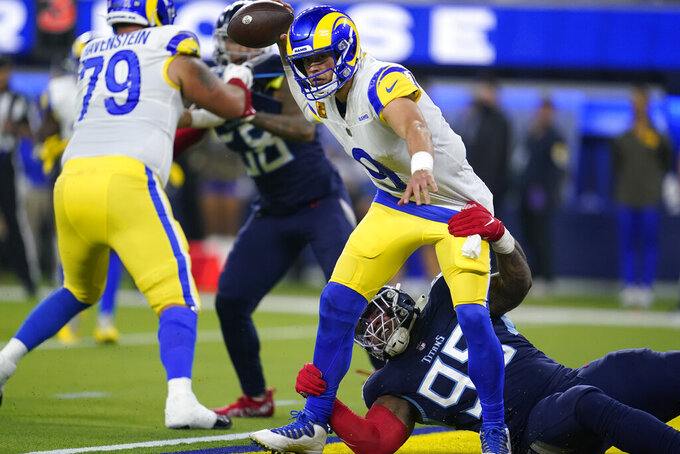 Los Angeles Rams quarterback Matthew Stafford, above, tries to get away from Tennessee Titans defensive end Jeffery Simmons before throwing an interception during the first half of an NFL football game Sunday, Nov. 7, 2021, in Inglewood, Calif. (AP Photo/Ashley Landis)

With Derrick Henry sidelined for at least the near future, the Tennessee Titans might need a new identity on their Super Bowl quest.

In their first game without the NFL's rushing leader, the Titans found it: They're a dominant defensive team capable of forcing even Stafford and the Los Angeles Rams' powerful passing offense into game-deciding mistakes.

Byard returned Stafford’s second consecutive interception 24 yards for a touchdown in the second quarter, and Tennessee’s defense carried the Titans to a 28-16 victory in a showdown between conference co-leaders.

“Those guys played fantastic,” Titans coach Mike Vrabel said of his defense. “It was fun to watch them play. ... We really think that group is playing with a lot of confidence right now. They would be able to come in here and play the way they did and hold them to field goals, and we played great in red zone.”

Simmons had three of Tennessee’s five sacks of Stafford, and he made another play that sent the Titans (7-2) well on their way to their fifth consecutive victory.

Simmons, who had more sacks than any Titans player since 2008, was about to sack Stafford in the end zone when the quarterback inexplicably threw a desperate pass into the heart of Tennessee's defense to avoid the safety. David Long Jr. returned his gift of an interception to the Rams 2, and Geoff Swaim caught a touchdown pass on the next snap.

Right after the kickoff, Stafford’s throw toward Robert Woods on the sideline was returned by Byard for his first career pick-6.

“The defense played huge all game, and those plays early were unbelievable,” quarterback Ryan Tannehill said. “You look at (Simmons') pressure on the QB, and then David making a play on the ball, then Kevin reading the pattern and getting underneath that out, it was huge. They played a heck of a game.”

Tannehill passed for 143 yards and a touchdown and rushed for another score for the Titans, who managed just 194 offensive yards without Henry, who's out indefinitely after foot surgery. Adrian Peterson rushed for just 21 yards, but the veteran running back made a TD run with 3:00 left in the first game of his 15th NFL season.

The Titans still won with defense. They got a key stop on downs near midfield with 6:39 to play, and Tennessee's defense nearly kept the Rams out of the end zone for just the fourth time in their 73 games under Sean McVay.

“I feel like KB (Byard) said it best in the locker room,” Titans linebacker Harold Landry said. “He was like, ‘We’re not out to prove people wrong, but to prove ourselves right.’ We know how talented we are in that locker room and the group of guys that we have.”

Stafford passed for 294 yards and threw the 24th pick-6 of his career — most among active quarterbacks — during easily the worst game of his debut season with the Rams (7-2). Los Angeles' four-game winning streak ended in just the fourth meeting in 15 years between two teams with their conferences’ top records.

“I basically spotted them 14 points,” said Stafford, who barely practiced during the week while managing a stiff back and then injured his ankle during the game. “Just wasn’t good enough early in the game. The turnovers are on me. Our defense played good. If we don’t turn over the ball tonight, we’ve got a chance.”

Los Angeles, the NFL’s least-penalized team, also got flagged 12 times for 115 yards — the most yards in McVay's career.

“We have to play cleaner football,” McVay said. "I want to see what we learn from our response. The last time we had a setback, I liked how we responded. ... A lot of things happened tonight that are uncharacteristic of us.”

Peterson had been out of the league before he signed with the Titans on Monday. Tennessee promptly put him in the starting lineup, and Peterson scored his 119th career rushing TD and 125th total touchdown, tying him with Walter Payton for 11th-most in NFL history.

“I thought he brought an energy and a professionalism,” Vrabel said.

Los Angeles had a touchdown taken off the board to begin the second half when officials ruled Tyler Higbee's toe had gone out of bounds before his scoring catch. The Rams kicked a field goal instead.

Von Miller did not make his debut for the Rams after they acquired him from Denver early this week. Miller is still working back from an ankle injury while learning the intricacies of the Rams' defense, and Los Angeles didn't rush the eight-time Pro Bowl selection.

Titans: Taylor Lewan was active, but Bobby Hart started at left tackle. Lewan was “unavailable” except in an emergency, Vrabel said. ... Aaron Brewer also started at right guard in place of Nate Davis.

Rams: Henderson injured his ankle in the second quarter, but kept playing. ... WR Jacob Harris left with an undisclosed injury in the second half.