Defense could be decisive in Super Bowl of dynamic offenses 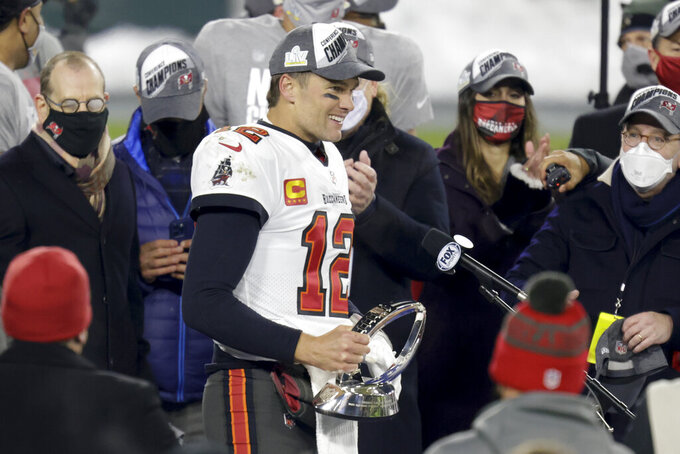 With Patrick Mahomes and the explosive Kansas City offense on one side, Tom Brady and Tampa Bay's resourceful attack on the other, expecting either D to be dominant or dangerous or definitive appears like folly.

WHEN THE CHIEFS HAVE THE BALL

Having clearly established itself as a force whether Mahomes is throwing to All-Pros Travis Kelce and Tyreek Hill, an impressive group of other targets, or handing off to Clyde Edwards-Helaire — not to mention, the quarterback taking off himself — Kansas City excels at scoring quickly. And often.

So where would Tampa Bay have any chance of defending the speed demons and shifty targets?

The Bucs showed how strong their pass rush can be in last week's NFC championship victory over Green Bay. They sacked Aaron Rodgers five times, bothered him a slew more, and that was operating against a solid offensive line.

Mahomes has similar escapability to Rodgers, and is far more of a threat to flat out run the ball himself. Keeping him in the pocket and pressured is a key, and the Chiefs will be without starting left tackle Eric Fisher (Achilles tendon). Barrett, edge rusher Jason Pierre-Paul and inside presence Ndamukong Suh must be controlled by Kansas City.

With a strong pass rush, the Bucs can protect a secondary that makes big plays, but also can give them up. If safeties Antoine Winfield Jr., a rookie, and Jordan Whitehead are limited, that could spell trouble, and Chiefs touchdowns.

Carlton Davis, Jamel Dean and Sean Murphy-Bunting are the key cornerbacks trying to slow the KC express. No one on the Tampa defense can match the speed of Hill or Mecole Hardman.

WHEN THE BUCCANEERS HAVE THE BALL

If Tampa Bay is on offense in the final minutes in a tight game, it's surely time for the Chiefs to worry.

There are only two ways to beat a Brady team in a Super Bowl. One is to outscore it in a shootout, as the Eagles did three years ago. The other is to mount consistent pressure up the middle and from the outside to make him throw before he wants to or can get set. Remember, Brady was intercepted on three consecutive series in the NFC championship.

The onus for protecting him falls on a solid O-line featuring left guard Ali Marpet and rookie right tackle Tristan Wirfs. They must deal with Kansas City DT Chris Jones and DE Frank Clark, plus an assortment of linebackers and defensive backs coming after their quarterback on blitzes.

Brady won't be running around to extend plays the way Mahomes can, but he also will be getting the ball out of his hand quickly and, at times, reading the Chiefs' coverage before they even show it.

In Mike Evans, Chris Godwin and Scotty Miller, plus tight ends Rob Gronkowski and Cameron Brate, Brady has receivers he is comfortable with. While the Chiefs are exceptional at safety with All-Pro Tyrann Mathieu and Daniel Sorensen, cornerbacks Charvarius Ward, L’Jarius Sneed, Bashaud Breeland and Rashad Fenton aren't at that level.

The Bucs settled on Jaydon Mickens as the punt returner after several changes, mainly because of injuries. Signing Ryan Succop has been their best offseason decision and he has been reliable on field goals, though he missed five extra points. Punter Bradley Pinion has a strong leg, but punt coverage has been problematic in the postseason.

Punt units have been a bit of an issue for KC. Hardman’s muff against Buffalo was the latest in a string of questionable decisions. But he also had a return touchdown this season.

Two 60-somethings who have defied the trend to hire young coaches, many of whom are in their first go-arounds as the top guy. Andy Reid and Bruce Arians, both offensive masterminds who have contributed deeply to the fabric of pro football in the 2000s, are play-to-win types rather than the play-not-to-lose coaches who, inevitably, wind up losing.

Reid's Chiefs have the most innovative attack the NFL has seen since perhaps the Rams' Greatest Show on Turf. Credit OC Eric Bieniemy for some of that, but Reid always has tested the limits. DC Steve Spagnuolo is equally as aggressive, and his best teams always bring a potent pass rush. Ask Brady about how his 2007 unbeaten Patriots were manhandled by Spags' D in the Super Bowl.

Arians leaves the defense to coordinator Todd Bowles, and that arrangement has especially been effective the last two months. Brady has become more comfortable with the offensive schemes and OC Byron Leftwich, with many of the QB's favorite plays incorporated in game plans.

Kansas City seeks to become the first repeat champion since New England (led by Brady) in the 2003 and 2004 seasons. Reid would solidify his already likely Hall of Fame credentials with a victory. Bieniemy would further display why he deserves a head coaching job.

Brady, of course, goes after a seventh ring in his 10th Super Bowl. He has already proven how overwhelmingly responsible he was for the Patriots' dominance, but that actually drives him even harder to equal such achievements with his new team.

Oh yeah, there's this: The Super Bowl is being played on the Buccaneers' home field, a first in this 55th edition of the game. The stadium won't be filled to anything near capacity, but familiar surroundings certainly can't hurt.