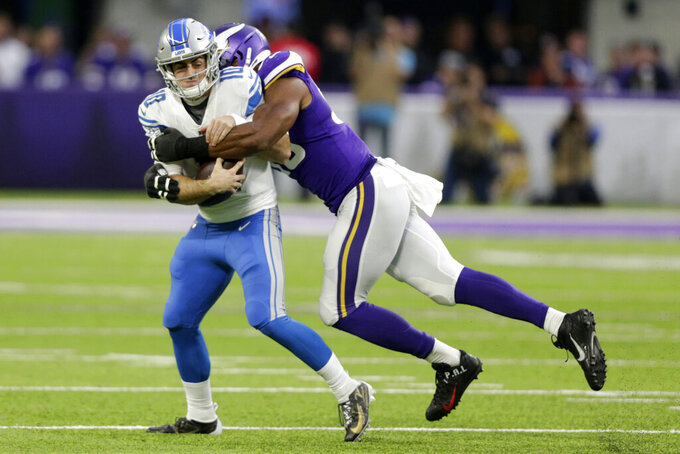 MINNEAPOLIS (AP) — Minnesota's long-dominant defense had been slipping for the past several weeks, a proud and seasoned group that needed to get its edge back.

The Vikings gave hardly any ground against the sputtering Detroit Lions.

Danielle Hunter had three of Minnesota's five sacks to spearhead a resurgence by the defense, and the Vikings sailed past Detroit 20-7 on Sunday to stick the Lions with their sixth straight loss.

“It’s important we get a chip back on our shoulder, and I thought we kind of did that,” coach Mike Zimmer said, adding: “We need to keep doing that. That’s why I wish we wouldn’t have let them score.”

“I can’t say enough good things about our defense. That really created the tenor for the game for us. We didn’t feel that much pressure on offense to have to keep scoring,” said Kirk Cousins, who passed for 242 yards and a touchdown.

Dalvin Cook had 75 yards from scrimmage and a rushing score on 20 touches over three quarters, as the Vikings (9-4) stayed on track for the playoffs and took it easy on their star tailback after an injury to his collarbone area forced him out of the previous game. The defense did not let up on Blough, though.

With Matthew Stafford sidelined by hip and back injuries for the fifth straight game, the rookie quarterback's first NFL road start was a rough one. Blough went 24 for 40 for 205 yards, one touchdown and two interceptions in the second half, and the Vikings allowed their lowest score in 31 regular-season games since a 16-0 win at Green Bay on Dec. 23, 2017. The Lions entered the week averaging 5.8 yards per play, the fourth-best in the NFL, but the Vikings held them to 3.2. Six days earlier, they gave up a season-high 37 points in defeat at Seattle.

“Just going back to the fundamentals, the basics, the techniques and all that,” Hunter said.

For the first time this season, the Lions (3-9-1) never held a lead. They entered the game with 92 first-quarter points, the most in the NFC, but they netted only 70 total yards on 32 plays in the first half and trailed 20-0 until Golladay's catch pushed the third-year wide receiver past the 1,000-yard mark for the second straight season.

“We look at our record and say, ‘That’s not what we are, and we've got to do better,” Lions coach Matt Patricia said.

The Lions fell to 9-19-1 under Patricia, including 2-5 against NFC North foes, putting the entire front office and coaching staff under scrutiny.

“They ain’t my problem. You have Ms. Ford to deal with that," said cornerback Darius Slay, referring to team owner Martha Firestone Ford.

The Vikings returned home from a costly defeat to the Seahawks on Monday night to a favorable matchup with the team they've beaten 76 times in 59 seasons as a franchise, 16 more than the next-closest opponent. The previous time the Vikings were beaten at home by the Lions at any point during the second half of the schedule was on Dec. 14, 1997.

“This was a weird one, because it felt like we couldn’t take a big step forward. It was either you don’t get it done and it’s going to be a problem or you win and you kind of shrug your shoulders and move on,” Cousins said. "So we just wanted to make sure we didn’t lose that edge or that energy.”

After a sharp debut on Thanksgiving Day in a defeat to Chicago, one of four losses this year by four points or fewer for Detroit, Blough faced a tougher test in one of the NFL's noisiest venues.

The first drive could hardly have been harder. Harrison Smith and Shamar Stephen batted down Blough's first two passes at the line of scrimmage, and then Hunter became the youngest player in NFL history at age 25 and 40 days to reach 50 sacks by taking down Blough to force the first of five three-and-out possessions for Detroit. Hunter has 11 sacks in nine games against the Lions.

Vikings: CB Xavier Rhodes rolled his right ankle during Smith's interception and didn't return. CB Mike Hughes, who took some of Rhodes' turns in the first half, hurt his oblique muscle in the fourth quarter. ... With WR Adam Thielen inactive for the fifth time in six games, rookie Olabisi Johnson again got the start. The seventh-round draft pick contributed his third TD of the season, a leaping catch he secured as he fell on his back in the first quarter.

UP NEXT Lions: Host the Tampa Bay Buccaneers next Sunday. Detroit is 5-9 at home in two years with Patricia. Vikings: Play at the Los Angeles Chargers next Sunday. Minnesota is 1-6 in road games in the Mountain and Pacific time zones under Zimmer, last winning at Oakland on Nov. 15, 2015. ___ More AP NFL coverage: https://apnews.com/NFL and https://twitter.com/AP_NFL