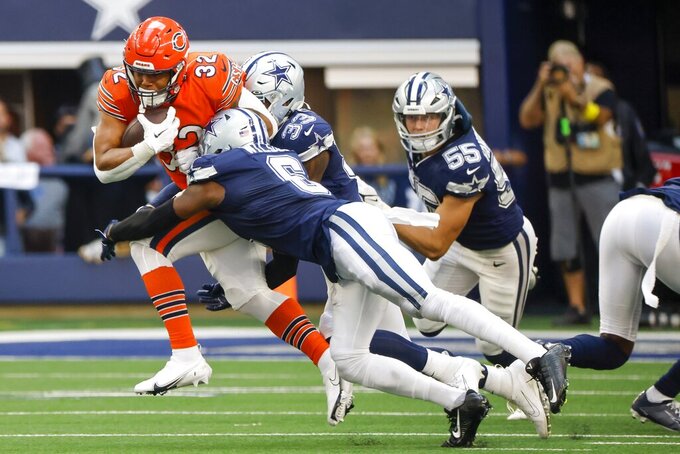 Chicago Bears' David Montgomery is stopped during the second half of an NFL football game against the Dallas Cowboys Sunday, Oct. 30, 2022, in Arlington, Texas. (AP Photo/Michael Ainsworth)

FRISCO, Texas (AP) — Mike McCarthy and the Dallas Cowboys decided before the season that defense would define this team.

For a coach who inherited Dak Prescott and has a history of leading quarterback rooms that included Brett Favre and Aaron Rodgers, it was a significant realization.

Still, it made sense with a unit that included reigning NFL Defensive Rookie of the Year Micah Parsons, a veteran pass rushing partner in DeMarcus Lawrence and 2021 interceptions leader Trevon Diggs.

Now that the defense has carried the Cowboys (6-2) through five games without an injured Prescott and started as Dallas' stingiest since the Doomsday era of the 1970s, McCarthy can say it out loud.

It's hard to overstate the difference from McCarthy's Dallas debut in 2020, when he hired old coaching buddy Mike Nolan to run what ended up being one of the worst defenses in franchise history.

The Cowboys immediately pivoted to Dan Quinn as defensive coordinator, putting the fired Atlanta coach back in the job he had when Seattle rode its defense to a title in the first of consecutive Super Bowl trips.

Taking Parsons in the first round (12th overall) of the first draft with Quinn certainly helped, as did the sudden second-year emergence of Diggs, whose 11 interceptions were the most in the NFL in 40 years.

Parsons is now one of the most dynamic pass rushers in the NFL, and among the fastest to get to 20 sacks, while the defense picked up a slower pace on takeaways by getting five in one half against Detroit.

A five-week window illustrates the difference for the Cowboys, who have a bye-week break before visiting Green Bay on Nov. 13.

Two years ago, Dallas allowed 180 points through the first five games on the way to a franchise-worst 473. This season, it was 72 — basically three touchdowns fewer per game.

“I would say I didn’t refer much to the past, I wasn’t part of the staff at that time,” Quinn said. “What I did do during that time, I knew we had to build a group together. I was going to be new to them.”

“Building that connection early, I probably was able to lead based on how we want to play and play style,” Quinn said. “So fast forward a year, you really see more of the players leaning in that space now.

“It’s what you’re looking for because inside the white lines, that’s where the player-to-player communication ... has to go down. I had a sense that would come this season.”

There was one other curiosity with the Cowboys believing defense would lead the way. They had one of the best offenses in the NFL last season.

However, Dallas traded No. 1 receiver Amari Cooper in a cost-cutting move and looked out of sync in the 19-3 loss to Tampa Bay in the opener, when Prescott fractured the thumb on his throwing (right) hand.

Cooper Rush won the next four games filling in, but mostly because he avoided mistakes and the Dallas defense allowed just five TDs the first five games.

The offense had its best showing of the season in the 49-29 victory over Chicago going into the open week, but the defense had its worst. The Bears ran for 240 yards — again exposing the Cowboys' weakness against the run — and scored four touchdowns.

The downturn going into the break won't change Parsons' mindset much.

“We’re only as good as the last game we played,” Parsons said. “That’s just part of staying neutral and staying grounded and focusing on the opponent ahead.”

With 33 sacks, the Cowboys might still be leading the NFL after their open week. Dorance Armstrong (five) and Dante Fowler (four) join Parsons (eight) and Lawrence (four) as players with at least four apiece.

Diggs has three of the team's seven interceptions, and safety Donovan Wilson is emerging as the club's best tackler.

The free agent signing of linebacker Anthony Barr during training camp gave the Cowboys more flexibility on keeping Parsons at the line of scrimmage. Barr's hamstring injury could change that formula.

Even with Prescott rounding into form coming off the injury, there's little question a franchise recognized for years by its offensive stars has a different identity. Parsons can relate, since he grew up a fan.

The coaches have been saying it for months.