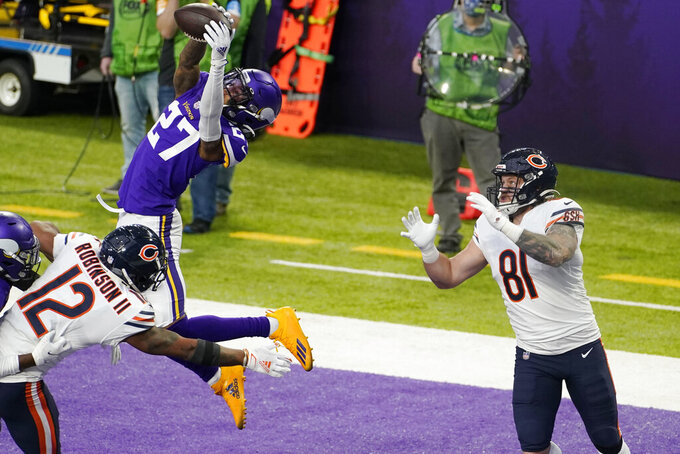 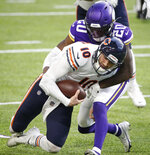 MINNEAPOLIS (AP) — After rushing for 132 yards, the most allowed by Chicago this season, Minnesota's Dalvin Cook urged the offense to "look in the mirror" and figure out what needs to improve.

Told of his star running back’s message, coach Mike Zimmer had another thought.

“I’d say the defense has to look in the mirror too,” Zimmer said.

The Vikings allowed 397 total yards, including a career-high 146 yards rushing to David Montgomery, in a 33-27 loss to the Bears on Sunday that dropped them to 6-8 and badly damaged their faint playoff hopes.

The game only further illustrated why the Vikings are on the outside of the postseason picture.

Without fans in the stands and crowd noise to feed off, the Vikings finished 3-5 at home. The defense, a staple of Zimmer’s tenure with the Vikings, failed to make key stops on so many occasions.

Rookie cornerbacks Cameron Dantzler and Jeff Gladney were learning on the fly this season, and injuries made the situation more challenging. The front seven was unable to mount a consistent pass rush without injured defensive end Danielle Hunter and linebacker Anthony Barr.

Playing a third straight game without linebacker Eric Kendricks, the inexperienced defense couldn’t handle a Bears attack with a rejuvenated Montgomery and quarterback Mitch Trubisky. Chicago (7-7) has scored at least 30 points in three straight games for the first time since 2013.

“I just feel we didn’t have the recipe to play as one,” Dantzler said. “We couldn’t stop the run as well as we did in the past. I just feel we have to build and learn from it, and just finish the season off strong.”

Trubisky was 15 of 21 passing for 202 yards, one touchdown and one interception, plus 34 yards rushing. The Bears went three-and-out on their opening possession and didn’t punt again, leading by as much as 20-7 in the first half.

When Minnesota finally made a stop — Dantzler intercepted Trubisky in the end zone with 2:57 left and Chicago leading 30-27 — the offense couldn’t capitalize. The Vikings were stopped on fourth-and-1 at their 29. Then after the fourth field goal of the game by Cairo Santos, a final-play Kirk Cousins heave into the end zone was intercepted.

“It’s certainly not where we wanted to be,” Cousins said. “You look back and think about some really tough losses on one play here or there throughout the season that you know you’re so close.”

For the fourth time in five weeks, Minnesota hosted a losing team with a chance to escape its own losing record and stay in the chase for the expanded playoffs. The Vikings can look back at a slate of home games in which they trailed by at least nine points in each one and went 2-2 against Dallas, Carolina, Jacksonville and Chicago — four teams currently outside of the playoff picture.

The defense, ultimately, was their undoing.

When the Vikings beat the Bears 19-13 five weeks ago in Chicago, the defense allowed only two first-half field goals with Montgomery out with a concussion. Since then, the Bears reshuffled their offensive line and reinserted Trubisky at quarterback following an injury to Nick Foles.