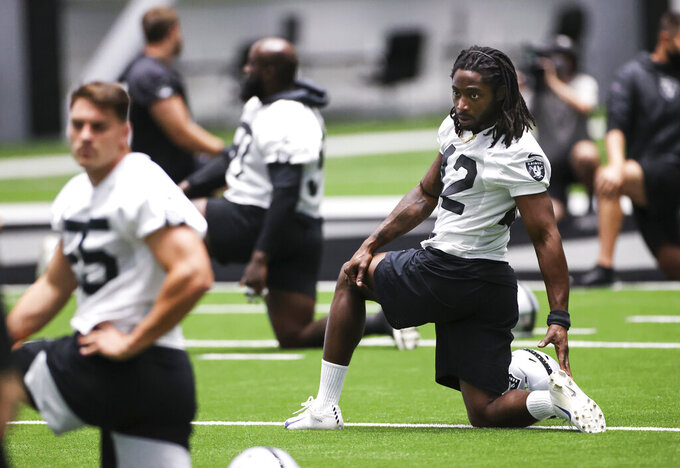 FILE - In this Aug. 16, 2020, file photo, Las Vegas Raiders linebacker Cory Littleton (42) stretches during an NFL football training camp practice in Henderson, Nev. The Raiders set out to bolster the middle of their defense this offseason by adding a penetrating defensive tackle in Maliek Collins and a versatile linebacker in Littleton. (Chase Stevens/Las Vegas Review-Journal via AP, Pool, File)

The Las Vegas Raiders set out to bolster the middle of their defense this offseason by adding a penetrating defensive tackle in Maliek Collins and a versatile linebacker in Cory Littleton.

Through three games, the return on that investment hasn’t been good.

Collins has struggled to generate pressure on a defensive line that hasn’t made any quarterback feel uncomfortable, and Littleton has far more missed tackles than big plays.

That has contributed to a defense that ranks in the bottom quarter of the league in yards per play and points per drive allowed as the biggest negative in what otherwise has been an encouraging start to the season for the Raiders (2-1).

Las Vegas was able to overcome deficiencies the first two weeks but couldn’t in last week’s 36-20 loss at New England when the offense struggled for long stretches and the defense allowed 250 yards rushing, thanks in large part to 19 missed tackles, according to defensive coordinator Paul Guenther.

“That’s far too many to win any ballgame, let alone against a team like New England,” Guenther said Thursday. “We got to do a better job of whoever’s in the spot to make the play and make the tackle, they got to get the runner on the ground, whether it be a receiver or running back. It wasn’t so much a scheme thing like their scheme against our thing. It was more or less that the guys at the point of attack missed the plays they needed to make and then the guys in the back end have to assure that the thing doesn’t go longer than it should."

The biggest culprits were safety Johnathan Abram with four missed tackles, according to SportRadar, and Littleton with three as the Patriots wore the Raiders down with their running game.

“There’s no real fixing or solution or giving anybody magic sauce,” Littleton said. “You do your job. We went into the game last week with the intent of just that. It didn’t happen in our favor. A lot of guys missed plays, myself included. You don’t want that. You go into the next game expecting to not let it happen.”

Littleton has seven missed tackles in all this season, tied for the third most in the NFL through three games and two more than he had all last season for the Rams.

He also hasn’t excelled in coverage and has not lived up to the $35.25 million, three-year contract he signed this offseason to shore up the linebacker position that has been a perennial problem for the Raiders.

“The only thing I can do is do what’s coached to me and try to put on the best performance I can,” he said. “So far it hasn’t been that great. But that’s football. There’s upswings, there’s downswings. Hopefully I get back on track and play how I want to be.”

Collins also hasn’t delivered for the Raiders after coach Jon Gruden talked him up all summer as the key to a defensive resurgence.

Collins ranked eighth in the NFL last season in pressure rate among defensive tackles, according to SportsInfo Solutions, but has recorded only two pressures on 71 pass rush chances so far this season.

That led to a pep talk earlier this week from Guenther and Gruden to try to get what they’ve seen from Collins on the practice field into the games.

“I think Maliek is pressing a little bit too much,” Guenther said. “He’s just got to go in there and do his job and let the things come to him when they present themselves, the one-on-ones and those type of things inside. I think they’ll take care of themselves. But he’s got to play at a high level for us to be successful.”