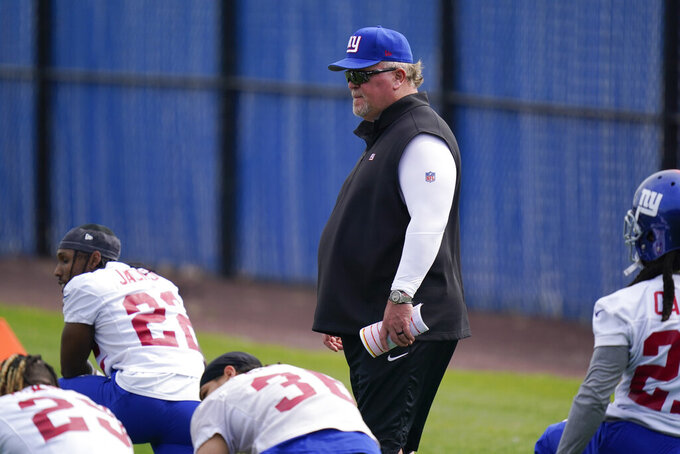 EAST RUTHERFORD, N.J. (AP) — When Wink Martindale was hired as the defensive coordinator of the New York Giants, there was rampant speculation about his unit this season.

The analytics and Martindale's reputation for being aggressive fueled the feeling the Giants were about to go wild on defense.

There would be blitzes every other play, multiple schemes, defenders in unexpected alignments and a return to the good old days of Lawrence Taylor, Harry Carson and one of the NFL's top defenses.

Not bad for a team that went 4-13 last season in posting its fifth straight losing season. The dismal season led to another coaching staff housecleaning with Brian Daboll replacing Joe Judge. It led to the hiring of a new staff.

The 59-year-old Martindale came to the Giants after a 10-year stint with the Ravens in Baltimore, the final four as the D-coordinator. His run ended after a poor season marked by a lot of injuries.

The down-to-earth Martindale has brought an approach the players seemed to enjoy Thursday as they went through an open organized team activity.

Martindale wants his defense to dictate to opposing offenses, both physically and mentally.

“I think this is a game of adjustments and matchups and everything else, but I would rather them have the headache and stay up five nights before we play them figuring out what we’re going to do and try to present different looks every time we play — because pressure does break pipes,” Martindale said.

Every game is different, he said. Play a veteran quarterback and the goal is to make him get rid of the ball faster. Play a younger kid, the goal remains to make him play faster, but add different looks to make him think more, too.

“At the end of the day, you want the quarterback on his back,” Martindale said. “I don’t care if he throws it or not, but if you can just get quarterback hits, they know who they are playing against.”

The 47-year-old Daboll, who was the Buffalo Bills offensive coordinator before getting the Giants top job, said he had no problem hiring a guy with a big personality. He felt Martindale had an excellent interview, communicated well and was tough to face in games.

Daboll was in the meeting the first day Martindale talked to his defense. It was quiet.

“He was the guy that was talking most of the time, but I’d say he encourages input and good give and take in there and now when I go in there the first five minutes, it’s like a party for five minutes,” Daboll said. “Everybody’s talking, laughing, telling stories, so I think he’s done a good job of loosening those guys up. We’ve got a long way to go with those guys.”

Outside linebackers coach Drew Wilkins worked with Martindale in Baltimore and followed him to New Jersey. He said Martindale can make anyone in the building feel as if they are the most important person in the organization. It creates people and players willing to sell out for him.

Martindale also has the ability to break down offenses and communicate that knowledge to his players.

“The simple part is what he is going to present to the players,” Wilkins said. “So when we go out there, it's a simple concept and he'll tell them: ‘We’re doing this, this and this this week', and he'll explain the whys behind it.”

Safety Xavier McKinney, who led the Giants with five interceptions last season, said the new defense allows the players to attack the ball.

The Giants will have a little more than three months to get the defense and, if they do, they'll have a chance at competing next season. That's if Daboll's offense gets in gear, too.

NOTES: Defensive back Jordan Mosley was waived. ... Daboll has become somewhat of a Rangers fan in his brief time in the New York City metropolitan area. That's good because a hockey game broke out during the workout with linebacker Quincy Roche and offensive tackle Korey Cunningham exchanging punches after a play. ... LB Kayvon Thibodeaux, the fifth pick overall in the draft, was among roughly a dozen players who wore red jerseys because of some type of injury. ... NFL Network's Steve Smith, the former Panthers and Ravens wide receiver, was working on the field, talking to players and coaches.