Deja vu: Chargers off to 1-2 start for 3rd straight year 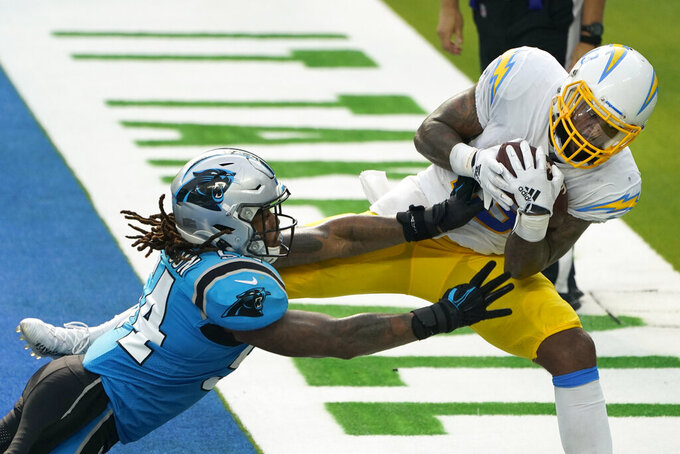 If it feels as if Anthony Lynn and the Los Angeles Chargers are having an awful case of déjà vu, you can’t blame them.

The Bolts are 1-2 for the third straight season after Sunday’s 21-16 loss to the Carolina Panthers. Once again it boiled down to a simple theme — too many turnovers and not enough takeaways.

Los Angeles had two fumbles and an interception that Carolina converted into 12 points. Opponents have scored 20 points off four giveaways this season while the defense has been able to generate only two turnovers, which both occurred in the opener against Cincinnati.

Last year the Chargers were last in the league with 14 takeaways and tied for the league’s worst turnover ratio at minus-17.

“It’s our job to go out there and create that, and we’re not getting it done right now, so we do need to work more on that,” safety Rayshawn Jenkins said.

"We have a good scheme, but they’re getting the ball out quick. It’s how we’re being game-planned sometimes, but we’ve got to make other plays, to get strips or something, because we can’t just bank on interceptions every game.”

Los Angeles has four interceptions in its past eight games, but only one has been by a defensive back.

Lynn selected Tyrod Taylor as his starting quarterback because he took care of the ball, but with Taylor sidelined for at least the next couple of games because of chest and rib injuries, rookie Justin Herbert has been thrown into the role.

Even though Herbert is only the third QB since the merger to throw for 300 yards in his first two games, he has been responsible for three of the past four turnovers (two interceptions and a fumble). Add in Joshua Kelley’s fumble from Sunday and all four giveaways were committed by rookies.

The Chargers have proven they can dig out of 1-2 starts. Two years ago they won six straight and 10 of 11 after a Week 3 loss to the Rams to make the playoffs for the first time since 2013. But if they can’t find a way to generate takeaways and eliminate costly mistakes, it could resemble last year’s 5-11 season where all but two of the losses were by eight points or fewer.

“I feel like we’re hurting ourselves whether it be penalties, turnovers, dropping balls, you know, things that it doesn’t really take skill to prevent,” running back Austin Ekeler said. “We got to make sure we stay more consistent. I feel like I’ve been saying the same thing for the past few years”

George Stewart’s special teams unit blocked an extra point for the second straight week. It is the first time since Miami and Seattle did it in 1985 that a team has blocked multiple PATs in the first three weeks of a season.

The Chargers have spent two seasons practicing the hook-and-ladder play waiting for the perfect time to use it. That came during the last play of Sunday’s game when Keenan Allen caught Herbert’s pass at the Panthers 15. Ekeler would have had a clear path to the end zone and the go-ahead touchdown to complete a 99-yard drive, but the lateral from Allen was too high and went off Ekeler’s hands.

Jenkins had nine tackles, including two for loss, and a sack as well as being more consistent in coverage.

A week after complaining on social media about playing only 43 snaps on defense, Desmond King got in for only 17 plays against the Panthers and didn’t record a tackle. He also wasn’t used as a punt returner after he alternated with K.J. Hill the first two games. The Chargers signed Jahleel Addae to the practice squad last week and elevated him to the game day roster on Sunday, which further muddles King’s role down the line.

OT Bryan Bulaga left the Carolina game with a back injury after being hampered with knee problems most of practice last week. WR Mike Williams also tweaked a hamstring.

It doesn’t get any easier for the Chargers, who hit the road the next two weeks to face NFC South opponents. The first stop is against Tom Brady and the Tampa Bay Buccaneers on Sunday. Brady is 9-2 in his career against the Chargers (including the postseason) and has won his past eight against them.