Denver Broncos build around Drew Lock in the NFL draft 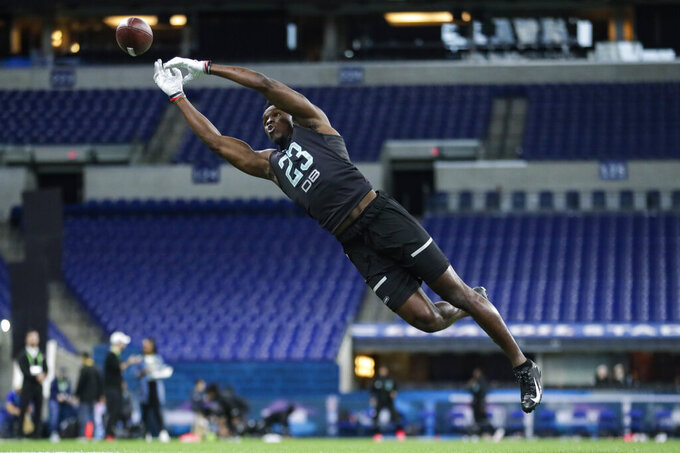 John Elway pledged to give Drew Lock more weapons and better protection in an NFL draft teeming with wide receivers and offensive linemen.

The Denver Broncos general manager provided Lock with two terrific targets and added an athletic center through the first two nights of the draft.

Elway selected Penn State speedster KJ Hamler with the 46th pick in the second round Friday night, 24 hours after using the 15th overall pick on Alabama standout Jerry Jeudy, the highest Denver has ever selected a wide receiver in the common draft era.

In the third round, Elway added protection for his second-year QB by drafting LSU center Lloyd Cushenberry, who was named first-team All-SEC in 2019.

Elway didn't neglect his defense, either, selecting Iowa cornerback Michael Ojemudia and Arkansas D-tackle McTelvin Agim in the third round.

Ojemudia will help fill the void left by the departure of Chris Harris Jr. to the Chargers this offseason, and Agim solidifies a refurbished defensive line that includes trade acquisition Jurrell Casey.

The jewel of Day 2 for Denver, though, was Hamler, who provides a jolt to the Broncos' offense and special teams.

“I think I bring to the table speed, quickness, playmaking ability,” Hamler said. “I’m versatile, I can play outside and I can play in the slot. I can return kicks and punts. I’m a playmaker.”

Hamler, who is generously listed at 5-foot-9 and 185 pounds, is elusive with an uncommon burst of speed and has modeled his game after DeSean Jackson and Steve Smith.

The Broncos see him as a Tyreek Hill-type playmaker who can also serve as Denver’s kick returner and help the Broncos chase down Hill and the Super Bowl champion Chiefs in the AFC West.

“I really couldn’t hear him just because my family was yelling and we were all crying,” Hamler said. “So it was kind of hard to hear him, but I hope he has that in mind. I would love to return kicks and punts.”

The Broncos’ once-formidable offense has been stuck in neutral for five years and last season Denver averaged a meager 17.6 points a game, 28th in the NFL, as their playoff drought reached four seasons.

A tweaked hamstring before the NFL scouting combine prevented Hamler from challenging John Ross’s record of 4.22 seconds set at the 2017 combine.

Even though he’s undersized, Hamler stood out even in a class of wide receivers like none other.

Hamler said he was surprised when Elway picked him after spending his first pick on Jeudy, but he said he was eager to team up with Jeudy, Courtland Sutton and former college teammate DaeSean Hamilton in Denver, where he expects to quickly make his mark.

Coach Vic Fangio expects Cushenberry to compete for the starting job along with Austin Schlottmann and Patrick Morris.

“He's got license to go in there and compete and win the job if he can,” Fangio said.

Fangio said the draft has been seamless so far with teams having to conduct it via videoconferencing during the COVID-19 pandemic.

“We haven't had any problems communicating with the unusual setup for this draft,” Fangio said. "I think John's done a great job orchestrating. We had some guys we wanted today and we had chances to go up and get them and John decided to sit and they ended up being the right choices both times.

“So, we saved draft picks and we got the guys we wanted. I think that comes with experience doing the job. So, I just get out of the way when it comes to that point.”