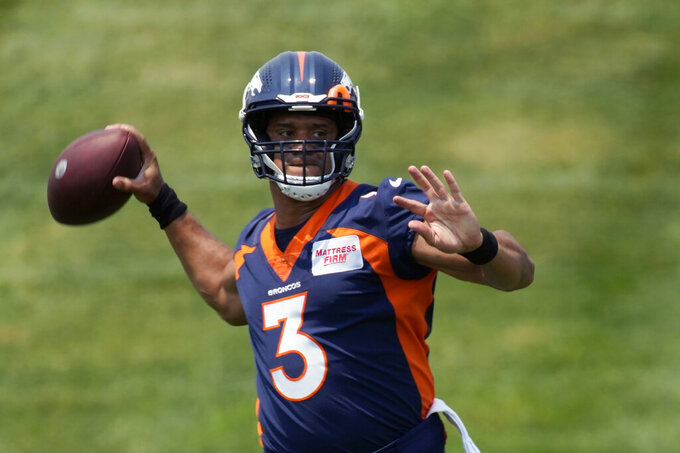 FILE - Denver Broncos quarterback Russell Wilson (3) takes part in drills during the NFL team's practice at the Broncos' headquarters Monday, June 13, 2022, in Centennial, Colo. The Broncos have undergone a major makeover this offseason. It began with Nathaniel Hackett replacing Vic Fangio as head coach and continued with the acquisition of star quarterback Russell Wilson from the Seahawks in exchange for a bevy of players and draft picks. (AP Photo/David Zalubowski, File)

LAST YEAR: The Broncos extended their playoff drought to six seasons since winning Super Bowl 50, a record dry spell following a championship. That cost Vic Fangio his job as head coach and Teddy Bridgewater his job as starting quarterback. They were replaced by Nathaniel Hackett and Russell Wilson, respectively. This turnover coincided with Walmart heir Rob Walton winning the right to purchase the franchise for a record $4.65 billion after decades of ownership by the Bowlen family. The Broncos went 7-10 for their fifth consecutive losing season and they extended their losing streak against division bully Kansas City to a whopping 13 games.

CAMP NEEDS: The Broncos are eager to see if OLB Bradley Chubb can bounce back from an injury-filled season and lead their pass rush alongside newcomer Randy Gregory, who missed the offseason program after undergoing shoulder surgery shortly after signing with Denver as the gem of the team’s free agent haul.

KEY CAMP COMPETITIONS: The race is on to see which WRs emerge as Wilson’s favorite playmakers. WR Jerry Jeudy missed some offseason workouts for legal and medical reasons in his quest for a breakout Year 3 after catching just three TD passes as a rookie and none last season. He has strong competition from Courtland Sutton, KJ Hamler and Tim Patrick, among others. Also, the O-line is a huge question mark with LT Garett Bolles about the only sure thing with LG Dalton Risner, C Lloyd Cushenberry, RG Graham Glasgow and RT Billy Turner the — slight — favorites to lock down the other starting jobs.

EXPECTATIONS: Strange as it sounds for a team that’s won an average of six games per season over the past half-decade, the Broncos are banking on a return to the playoffs now that they finally have a worthy successor to Peyton Manning under center.