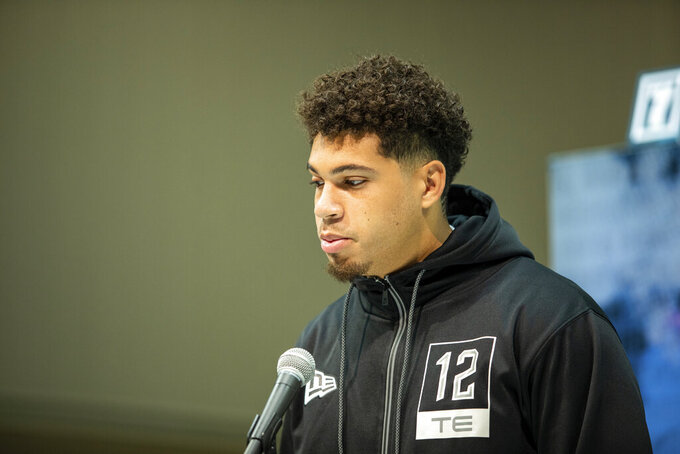 Albert Okwuegbunam talks to the media at the NFL Scouting Combine on Tuesday, Feb. 25, 2020 in Indianapolis. (Detroit Lions via AP)

John Elway waited four years for just this sort of weekend where could actually build around a quarterback instead of sleuthing for one.

After declaring Drew Lock his starting QB this spring, Elway used his cache of 10 picks in the NFL draft to score both targets and shields for his second-year passer.

Moreover, the Broncos GM injected some serious speed into an offense that averaged a piddling 17.6 points last season — and only 15.9 before Lock's five-game audition during which Denver averaged 21.4 points.

“We had to get some speed and we had to get some talent on that offensive side and some explosiveness," Elway said Saturday after adding fleet tight end Albert Okwuegunam, a teammate of Lock's at Missouri, and light-footed Florida wide receiver Tyrie Cleveland to the mix.

That followed Elway's selections of two of the fastest members of this deep class of wide receivers in first-rounder Jerry Jeudy of Alabama and Penn State speedster KJ Hamler in the second round.

With all this added firepower, the Broncos expect to both catch up to and keep up with the Super Bowl champion Kansas City Chiefs.

“We need to score more points whether we're playing the Chiefs or not,” coach Vic Fangio said. "But obviously playing against them, you're going to need to. So, that was part of it and it's always good to be fast.

“Hopefully we're a harder offense to defend now once it evolves and we get to playing games.”

Elway not only built the Broncos’ draft class with Lock in mind but he did it with Lock on the phone at one point.

“The first phone call Vic and I made today was to Drew to find out about Albert and see what he thought about him, because he had a much better junior year when Drew was there than he had last year,” Elway said.

Lock had high praise for Okwuegunam, especially his speed.

“When Drew gave him the seal of approval we were glad he was our target in the fourth round,” Elway said. “Plus, to put him on the other side from Noah (Fant), he’s a 4.49 guy that can really run at 258 pounds, and a big target in the red zone, so another player with great speed we could add.”

Lock’s big arm will be put to use whenever football returns.

He also brings a built-in chemistry with Lock.

“I can’t even explain how fired up I am ... just to have that chemistry and trust and confidence already established there,” Okwuegunam said.

“It’s going to put a lot of strain on the corners and safeties,” Okwuegbunam said, adding that he and Fant will leave the linebackers in their wake, too.

Elway also drafted center Lloyd Cushenberry in the third round. He’ll get the opportunity to win the starting job next to right guard Graham Glasgow, part of the Broncos’ free agency haul that also features running back Melvin Gordon.

Elway added some strength in the sixth round in Fresno State guard Netane Muti, who put up an astonishing 44 reps on the bench press at the combine, the most in eight years at the combine and the fourth-highest total ever.

“I’ve always loved the weight room,” Muti said. “So, that was a big thing for me.”

Denver’s defense hasn't been the problem, staying stout year after year as the Broncos churned through quarterbacks, coaches and offensive coordinators in the wake of Peyton Manning's retirement four years ago.

From his end, Elway said there weren't any hiccups in the draft conducted via videoconference because of the COVID-19 pandemic.

“I thought it went great. There were hardly any issues at all,” Elway said. "I'm sure there's teams that had some issues here and there and other than Vic's internet going out on the first day we really didn't have any issues at all.

"So, I think the credit goes to Commissioner (Roger) Goodell. He was taking a lot of heat because there were a lot of people that wanted to push it back, didn't want to do this, didn't want to attempt it, didn't want to stay at home and do it. Everybody wanted to get to their war rooms. And he pushed everybody out of their comfort zone and I think it came off great.

“People were craving something live and something the could look at on TV and get excited about.”