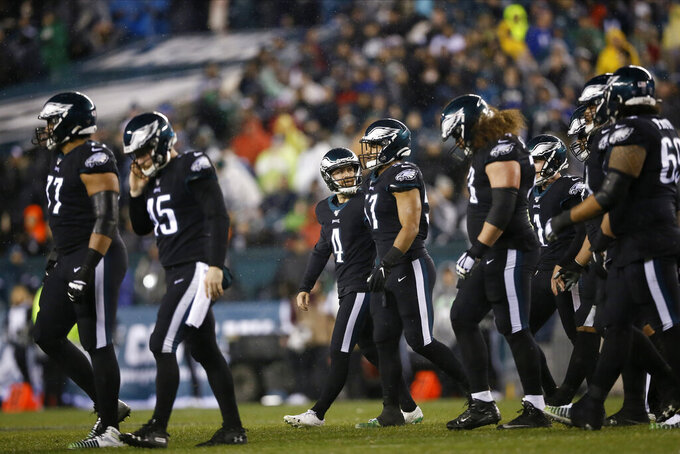 Philadelphia Eagles' Jake Elliott (4) walks off the field after missing a field goal during the second half of an NFL football game against the New York Giants, Monday, Dec. 9, 2019, in Philadelphia. (AP Photo/Michael Perez)

LANDOVER, Md. (AP) — The list of injuries for Philadelphia has gotten so long that the Eagles just added a castoff from the lowly Washington Redskins to their roster.

Signing wide receiver Robert Davis off the practice squad is just the latest move for the depleted Eagles, who at 6-7 are tied with the Dallas Cowboys atop the NFC East. Missing injured running backs Darren Sproles and Corey Clement as well as receivers DeSean Jackson, Alshon Jeffrey and possibly Nelson Agholor, Philadelphia visits 3-10 Washington on Sunday looking to keep its playoff hopes alive.

“It’s been a challenge for us,” Eagles coach Doug Pederson said of his team’s injuries. “With some of the young guys, we’ve just got to continue to coach and continue to prepare them and find ways to move them around or utilize the tight ends a little bit more. Whatever we can do to still be effective in the passing game, we’ve got to do it. Our young players understand their role and they’re excited for the opportunity.”

The good news for Carson Wentz and the Eagles is they shouldn’t have to put up many points because they’re facing the NFL’s worst offense, and their defense is more than capable of capitalizing on the mistakes of Redskins rookie quarterback Dwayne Haskins.

“I’d like to see our offense start better than what we did last week,” Callahan said. “If you’re a good football team in the National Football league, that’s a factor, starting fast. Now, it doesn’t mean that you’re going to be in the playoff hunt because of that, but it just enhances your opportunity to get your tempo going, to get your rhythm going, to get the confidence you need for your units and obviously for all sides of the ball.”

The Eagles are under .500 but in the playoff hunt because the Cowboys have stumbled just as much. A matchup with Dallas awaits in Week 16 before wrapping up at the New York Giants, and the Eagles would capture the division if they win out.

The closing stretch begins with a winnable game at Washington.

“Each of the teams had great hopes, high expectations and it was going to be one of the tougher divisions in football,” Pederson said. “It is a little bit of a shock that all four (NFC East) teams are under .500. And for whatever reason, it could be injury, it could be bad luck, whatever it might be, it’s unfortunate, but I still have a lot of respect for the three other teams in our division and look forward to the matchup on Sunday.”

HOME AWAY FROM HOME

In a departure from recent home games where tickets were available for under $20, another visit from the Eagles has pushed demand back up on the secondary market. With the Redskins eliminated from playoff contention and the Eagles in the thick of the division race, that likely means the stands will be full of green.

After Washington put second-year running back Derrius Guice on season-ending injured reserve and with Haskins not 100% because of a sprained right ankle, expect another heavy dose of Adrian Peterson carrying the ball on Sunday. Peterson is 34 but has every intention of playing next season.

“My body's feeling good, and I'm still loving the game,” Peterson said. “Obviously I still can play and perform at a high level, so why walk away from it now? I'm going to keep going.”

But first, Peterson is searching for his ninth 1,000-yard season. He heard right tackle Morgan Moses and other offensive linemen referring to being 282 yards away, and Peterson has set it as a goal.

“I’ll get there,” Peterson said. “They definitely want to get me there, so it'll happen.”

The run of injuries has shifted plenty of roles around on Philadelphia’s offense. Running back Boston Scott rushed for 59 yards on 10 carries Monday night in an overtime win against the Giants.

“I don't know if surprised is fair, but it certainly was exciting to see,” offensive coordinator Al Groh said. “He brought an energy, got out there and made people miss. Made some exciting, loud plays. Got the fans energized and excited, got his teammates excited. He really provided the spark and I think people fed off of that.”

Haskins is making his sixth start, and the Eagles have had success going against rookie quarterbacks under defensive coordinator Jim Schwartz. Haskins has been sacked 26 times on only 160 pass attempts and has thrown seven interceptions.

"You can tell he's going to be a good player. We've just got to make sure it's not on Sunday," Schwartz said. "I don't have a folder somewhere that says, 'Rookie Quarterback' and you pull that out and that's the game plan. It depends on a million different other considerations going into it."