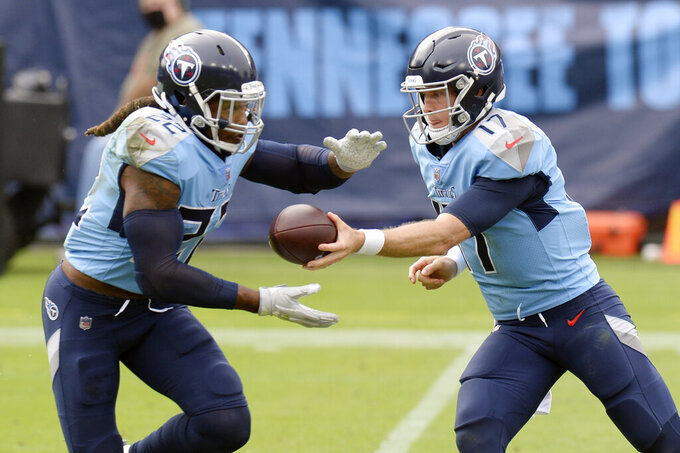 Tennessee Titans quarterback Ryan Tannehill (17) hands the ball off to running back Derrick Henry (22) in the first half of an NFL football game against the Pittsburgh Steelers Sunday, Oct. 25, 2020, in Nashville, Tenn. (AP Photo/Mark Zaleski)

Derrick Henry has few words to say until he’s asked about his favorite running backs.

“When I was a kid, I didn’t really have much to do so I always watched NFL Network when they had those old NFL films come up, the 1980s great backs,” Henry said on the AP Pro Football Podcast. “I would always watch clips when they showed games or they played or showed highlights of the old-school dudes leading up to now. I was in awe anytime I could watch any of those guys I named.”

Henry mentioned backs with varying and contrasting styles such as the elusive Barry Sanders and the powerful Earl Campbell. He studied all of them.

“I didn’t really try to emulate (any specific running back),” Henry said. “I love the position. I love watching guys be great.”

The 6-foot-3, 247-pound Henry is a tough, punishing runner known for tossing guys aside with a strong stiff-arm. He led the NFL in yards rushing (1,540), touchdowns (16) and carries (303) last year, helping the Titans reach the AFC title game. He again leads the league in all three categories with 663 yards rushing and seven TDs on 143 attempts as the Titans (5-1) are first in the AFC South. Henry doesn’t mind inflicting pain on tacklers.

“At this position, you have to be physical because you get hit so much,” he said. “You definitely want to deliver a blow to a defender before they deliver the blow to you. You want to get on a defender, get physical, go north and south.”

Henry embarrassed Bills cornerback Josh Norman in a win on Oct. 13, tossing him a couple of yards with a vicious right-arm shove.

“That was probably one of the meanest stiff arms I’ve ever seen, no doubt,” Titans quarterback Ryan Tannehill said.

Knocking guys down hasn’t stopped Henry from big gains, either. He stiff-armed three Jaguars on a 99-yard TD run in December 2018. He burst up the middle and sped away from the entire defense on a 94-yard TD run against Houston two weeks ago.

“The great thing about him is that as he continues to run downhill and he makes moves, he is always moving forward so it makes it hard for people to tackle him,” Titans left guard Rodger Saffold said. “Once he gets into the open field, good luck.”

Henry has a league-high eight TD runs of at least 50 yards since entering the league in 2016, including three runs last season and one this year.

His teammates get more excited seeing him stiff-arming defenders than the long runs.

“The stiff arm for sure,” wide receiver Corey Davis said. “Derrick, he can do it all and I think guys often forget about his speed. I’ll say his stiff arm particularly in Buffalo, that was my favorite one. It had me fired up.”

The popularity of Henry’s stiff-arms earned him an endorsement with Old Spice.

Henry’s 45-second commercial debuts next month and features him stiff-arming several defenders and carrying two tacklers into the end zone, outside the stadium into the street across a busy intersection, through a playground, an airport runway and finishing up on a treadmill.

“I’ve been watching the commercials since I was a kid and used Old Spice because of those commercials,” Henry said. “I love football and love the superstars that they used in those commercials. So this is like a dream come true. It’s definitely a surreal experience.”

Henry had to wait for an opportunity after the Titans drafted the 2015 Heisman Trophy winner in the second round. He played behind DeMarco Murray his first two seasons before getting the featured role in 2018.

“It’s all God’s timing,” said Henry, who wears a cross in eye black on his cheek under his helmet. “If you’re a competitor, you want to play right away, have an impact right away. But that wasn’t the situation for me. There were a lot of guys who played in the league for a long time at a high level and college coaches I called for advice. Just been patient, waiting until the opportunity came and took advantage.”