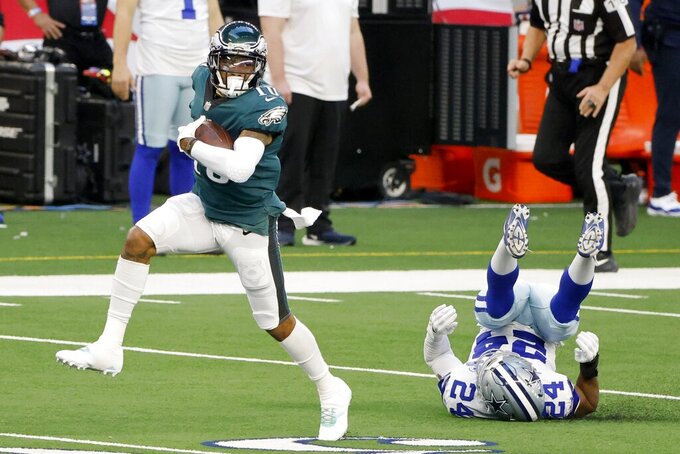 FILE - In this Sunday, Dec. 27. 2020 file photo, Philadelphia Eagles' DeSean Jackson (10) catches a long pass and gets past Dallas Cowboys cornerback Chidobe Awuzie (24) on his way to the end zone for a touchdown in the first half of an NFL football game in Arlington, Texas. Veteran receiver DeSean Jackson has signed with the Los Angeles Rams, returning to his native Southern California after 13 NFL seasons on the East Coast. The Rams announced the deal for Jackson on Sunday, March 21, 2021 adding him to the targets for new quarterback Matthew Stafford.(AP Photo/Michael Ainsworth, File)

Jackson grew up in the city's Crenshaw district, and he played youth games in nearby Inglewood at Darby Park, which is right next-door to the land where Rams owner Stan Kroenke raised his palatial stadium over the past half-decade.

“That's where I started playing football,” Jackson said Friday, smiling at the memories.

Jackson went on to a decorated 13-year NFL career, but now the speedy receiver is home again with the Rams for a chance to add a Super Bowl ring to his many accomplishments.

Los Angeles signed Jackson to be the game-breaking deep threat it lacked last season, and to be another steady target for fellow veteran newcomer Matthew Stafford. Jackson has played in only eight games over the past two years due to injuries, but he says he's healthy and refreshed by his new opportunity.

“For me to be here on my stomping grounds, in the areas that I’m very familiar with, there’s not a better feeling, man,” Jackson said. “I look at it like almost when LeBron (James) went back to Cleveland and won a championship for Cleveland, Ohio. So that’s what I’m here for. That’s all I’m really worried about."

The three-time Pro Bowl selection from prep powerhouse Long Beach Poly has been one of the NFL's most consistent big-play threats since he joined the Philadelphia Eagles in 2008. He is sixth in NFL history with 17.4 yards per reception, and nobody has ever scored more touchdowns covering 60 or more yards than Jackson's 24.

Returning to Southern California, where most of his extended family still lives, after a career on the East Coast clearly thrilled Jackson, who was only 8 years old when the Rams and Raiders left town.

“I just was talking to my cousin, saying, ‘This is the perfect time for me to come back to LA,’” Jackson said. “I’m very focused on my kids, my family. I’m not at that young stage anymore where I’m worried about hanging out and going to clubs or partying. I’m just at a different space in my life, so right now is the perfect fit.”

Another transplant also figured prominently in his decision: Jackson wanted to re-team with Sean McVay, who was Washington's offensive coordinator for their three seasons together from 2014-16 before McVay took over the Rams and Jackson moved to Tampa Bay.

Jackson credits McVay and Jay Gruden with restoring his faith in the game after the Eagles released him following his 1,332-yard season in 2013, a move Jackson still calls “a stab in my back.” Jackson racked up 2,702 yards and 14 touchdowns in 39 games with McVay.

“We have a very special relationship,” said Jackson, who is 11 months younger than McVay. “That’s something that was very intriguing, to be able to come back and reemerge with somebody that really knows me. ... He knows how to utilize me and he’s going to put me in the best positions to win.”

After Jackson signed his one-year, $4.5 million deal to join the Rams on Thursday, he took his first tour of SoFi. The stadium will host the Super Bowl in February, and Jackson said the opportunity to play for a team with a legitimate shot at the biggest game was another powerful motivation.

Jackson has never made it to the Super Bowl, but he got close when he scored a fourth-quarter touchdown in the NFC championship game as a rookie.

“I’ve been a part of some great teams and done some special things,” Jackson said. "With the Super Bowl being here this year — I mean, I don’t want to get too excited and talk about any of that stuff, but in my heart and my mind, I’m going to work my tail off to get to that, to bring something special to the city, man, because it’s definitely deserving.”

Jackson has caught passes from Donovan McNabb, Michael Vick and Kirk Cousins over his career, but he is eager to team up with Stafford, the prolific former Detroit Lions quarterback who also headed to LA for the chance to join McVay for a Super Bowl shot.

“That dude is a beast," Jackson said. "His arm is out of this world. I’m going to say, ‘Man, I’m going to run far. You just throw it far, and hopefully we can beat everybody.’”