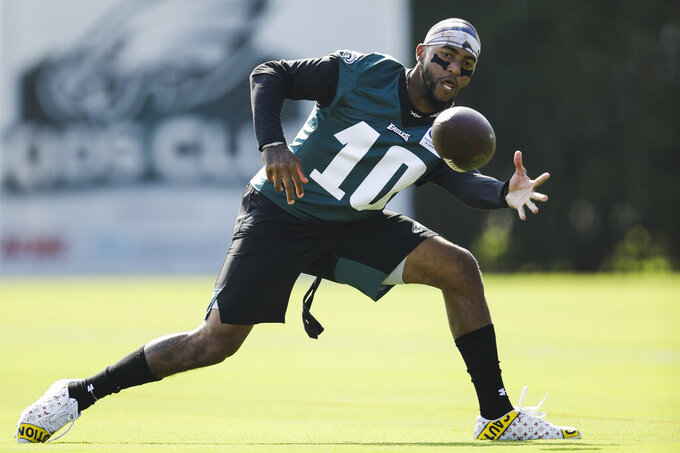 Then he did it again. And again.

Jackson and Wentz were in sync throughout practice Monday, the team's fourth time on the field in training camp.

"Every day, it grows," Wentz said about their chemistry. "Whether it's on the field and you can actually see it with live reps or after practice, off the side in between reps and team drills, we're talking, watching film. Chemistry grows in a million different ways, so to get those opportunities on the field, you see it and it's exciting."

Wentz misfired a couple of times to Jackson on Saturday, so they spent time after practice working out the kinks. It was evident they're on the same page.

"You gotta get the reps in, man," Jackson said. "You can't shortcut the reps. Getting the reps in and then going in the film room and just kinda watching and seeing how you can connect."

Jackson gives the Eagles a deep threat to complement a strong receiving corps that includes Alshon Jeffrey, Nelson Agholor, Mack Hollins and rookie J.J. Arcega-Whiteside. Tight ends Zach Ertz and Dallas Goedert might be the best 1-2 duo at their position.

Whoever is on the field with Jackson will benefit from his presence.

"We haven't had a player like him since he left," said Ertz, who played with Jackson in 2013 when he had 82 catches for 1,332 yards and nine touchdowns. "There's no route he can't run, no play you don't want to get him involved in. Defenses just have to know where he is every play or it's going to be a 70-yard touchdown. He just makes everyone else's job so much easier. I couldn't be more thrilled to have him back."

Jackson was selected by Philadelphia in the second round of the 2008 draft and played in the NFC championship game his rookie season. He caught passes from Donovan McNabb, Michael Vick and Nick Foles during his first stint in Philadelphia. He is excited to play with Wentz and they've spent time together off the field.

"He knows when I'm going to break or when he's dropping back, I know where the ball is going to be," Jackson said. "And we spent a lot of time back in the spring just trying to get together, connect and just working out, just bonding off the field. That's important as well, too. We spend so much time here, but as long as you can get off the field sometimes and not have the playbook involved, just having conversations about life and in general just to try to build."

NOTES: Hollins left practice with a lower-body injury. "We're just being cautious with it, so we kept him out," coach Doug Pederson said. "He did some stuff individually. We're going to continue to monitor it day by day." ... CB Cre'Von LeBlanc's foot injury is week to week, Pederson said.