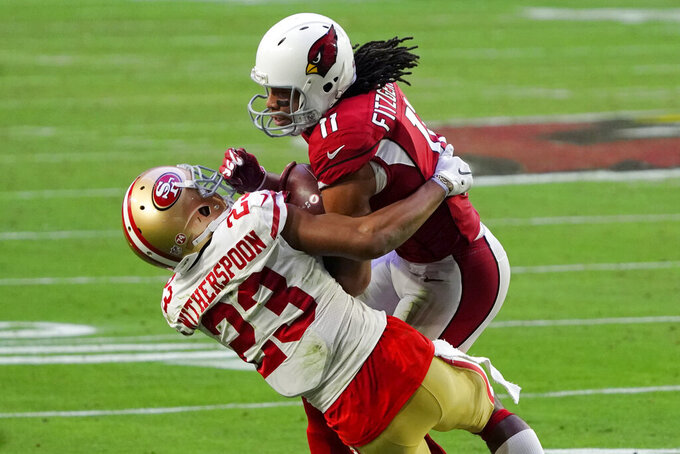 GLENDALE, Ariz. (AP) — Quarterback Kyler Murray lingered on the bench for a minute or two before eventually limping toward the locker room following the Arizona Cardinals' humbling 20-12 loss to the San Francisco 49ers on Saturday.

His right leg was hurting. His face was scrunched with a look of anger and pain.

The Cardinals controlled their postseason fate entering the weekend. That's no longer the case after losing to an opponent that was down to its third-string quarterback and had lost six of its previous seven games.

“I definitely didn’t see something like this coming,” Arizona linebacker Haason Reddick said. “We don’t really know what happened. I do know it wasn’t just one person. It was a collective effort. We didn’t get the job done."

Arizona (8-7) is still in the No. 7 and final spot in the NFC playoff race after losing to the 49ers, but the Chicago Bears are just a half-game behind. If the Bears win their final two games — starting with Sunday's matchup against the Jaguars — they will reach the playoffs because of a tiebreaker over the Cardinals.

It was a frustrating game for the Cardinals' offense, which moved the ball well at times but struggled to hit on big plays. Tight end Dan Arnold dropped a pass that would have gone for a big gain. Pro Bowl receiver DeAndre Hopkins couldn't make a difficult catch that would have been a touchdown.

A couple of ill-timed penalties hurt. So did a couple of turnovers. It all added up to a deflating loss that could keep the Cardinals out of the postseason for a fifth straight season.

“We know how good we can be when we play at our best," receiver Christian Kirk said. "Today is just one of those days where we just didn’t play the caliber of football that we know we can play.

Arizona's defense gave up 227 yards rushing, including 183 for Jeff Wilson. That meant there wasn't too much pressure on third-string quarterback C.J. Beathard, who was making his first start since 2018. Beathard threw three touchdown passes on just 22 pass attempts.

The biggest immediate concern for the Cardinals is Murray's health. The second-year quarterback was hit by the 49ers’ Alex Barrett after making a throw as Arizona tried to rally in the closing seconds. The fourth-down throw fell incomplete, clinching the 49ers win, and Murray rolled over in pain.

Trainers attended to him before he limped off the field after a couple of minutes. Coach Kliff Kingsbury didn't have an update on the quarterback's status after the game, saying the injury was being evaluated. The quarterback didn't talk to reporters after the game.

It was an uneven performance for Murray, who threw for 247 yards on 31 of 50 passing. He also ran for 75 yards on eight carries. But he threw a crucial interception in the end zone with 4:39 left when the Cardinals were trying to rally for the game-tying touchdown.

Now all the momentum that was gained following two straight wins over the Eagles and Giants has vanished.

“We just have to find a way to take the next step, not have these moments where we don't play as well we could and coach as well as could,” Kingsbury said. “I just think it's part of the process.”