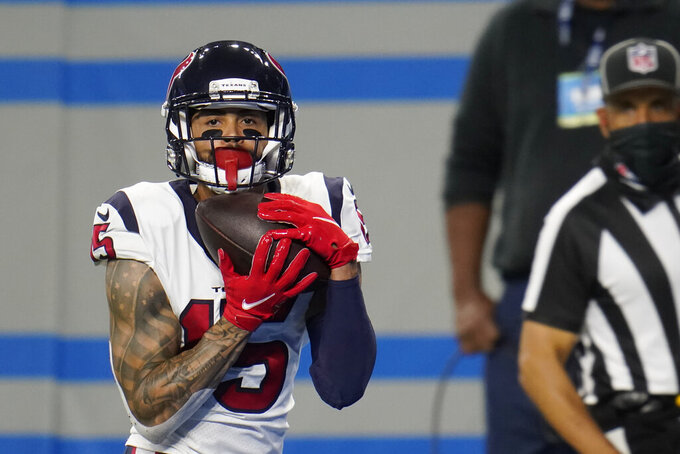 Houston Texans wide receiver Will Fuller catches a 34-yard pass for a touchdown during the second half of an NFL football game against the Detroit Lions, Thursday, Nov. 26, 2020, in Detroit. (AP Photo/Paul Sancya)

DETROIT (AP) — Deshaun Watson dropped back in a protected pocket at midfield and perfectly lofted one of his four touchdown passes, connecting with Will Fuller in stride just before he reached the end zone.

Houston's star quarterback made it look easy, and the Detroit Lions did their part to not put up much of a fight.

Watson had a pair of go-ahead touchdown passes in the first half and threw for two more scores in the fourth quarter to help Houston pull away and beat Detroit 41-25 Thursday.

And still, he wasn't satisfied.

“It was definitely good, but I missed two touchdowns," Watson said.

The dynamic quarterback finished 17 of 25 for 318 yards with four touchdowns and no interceptions. He has thrown 15 touchdown passes without getting picked off once in the past six games.

“You've got to give some credit to the guys up front," interim coach Romeo Crennel said. “If they give him time, he’s able to make plays. Guys can get open and he can hit them. He has that kind of accuracy."

Texans star defensive end J.J. Watt had an early pick-6 and Fuller had six receptions for 171 yards and two touchdowns, including a 40-yard touchdown catch in which it looked like he and Watson were all alone on a practice field.

The Texans (4-7) have won two straight for the first time this season and three of their past four games with Crennel.

The Lions haven't, either, and it might cost at least one man his job.

Detroit (4-7) might end the season with interim leaders after losing consecutive games for the third time this season, dropping coach Matt Patricia's record to 13-29-1 and general manager Bob Quinn's mark to 12 games under .500 over five seasons.

Patricia was peppered with questions about his job being in jeopardy, and evaded each query.

“My focus every day is on the guys in that locker room and working as hard as I can to help them be successful," he said.

The Lions retained Patricia and Quinn for this season and ownership said there was an expectation they contend for the playoffs by playing in meaningful games in December. And, that seems highly unlikely.

Detroit quarterback Matthew Stafford said the scrutiny on Patricia has not appeared to affect him.

“He’s the same guy every day," Stafford said. “The guy comes to work, grinds, and wants to win like all of us. He’s a passionate coach, who loves the game. I’ve had a lot of respect with how he’s continued to come to work.”

Detroit, which was coming off its first shutout loss since 2009, scored first before collapsing with turnovers on two straight snaps and three consecutive possessions in the first half. Houston's defense entered the game with an NFL-low five forced turnovers.

Watt put his hands up on a rush just in time to pick off Stafford's pass and returned it 19 yards for a touchdown in the first quarter.

“I saw he was going to throw quickly so I stopped rushing and jumped up," Watt recalled. “It hit me square in the hands."

On Detroit's next snap, Jonathan Williams fumbled and Houston took advantage with Watson's 2-yard touchdown pass to C.J. Prosise to go ahead 13-6.

Watson's first touchdown pass to Fuller early in the fourth put Houston ahead 34-17. He connected again with Fuller, who was wide open, with a 34-yard touchdown on a trick play after handing the ball off and getting it back on a lateral.

Stafford was 28 of 42 for 295 yards with a 14-yard touchdown pass to Mohamed Sanu in the fourth and an interception that Watt returned for a score. Detroit's Adrian Peterson had a pair of 1-yard touchdown runs in the first half — and tried to take some blame off Patricia for the latest loss.

“It has nothing to do with the head coach," Peterson said.

Detroit defensive back C.J. Moore and Houston defensive back A.J. Moore, identical twins, embraced before the game and played against each other for the first time.

Watt became the third NFL player to have at least 100 sacks and six touchdowns in a career. The others are Jason Taylor and Julius Peppers.

Watson and Stafford were among a handful of players on both teams that took a knee during the national anthem, a social justice statement that didn’t sit well with President Donald Trump.

“No thanks!” Trump tweeted.

Lions play at Chicago on Dec. 6.