Despite blowing 21-0 lead, Bengals hope turnaround is near 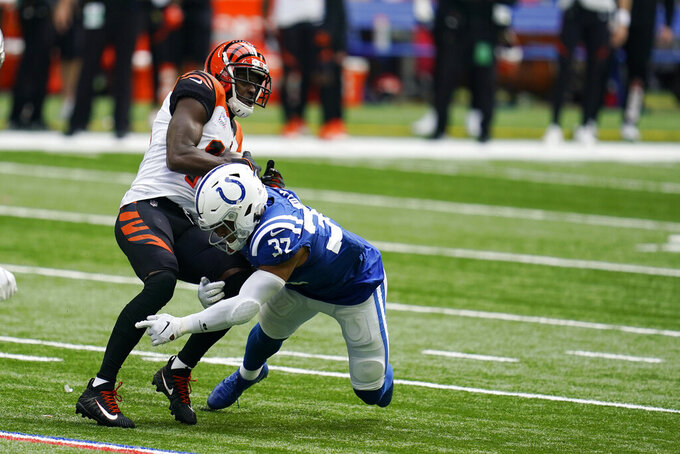 COLUMBUS, Ohio (AP) — The Cincinnati Bengals say they're playing well enough to win most of the time, especially with the dynamic playmaking and big numbers put up by rookie quarterback Joe Burrow.

But the finish has been a problem for Burrow and the frustrated Bengals (1-4-1). On Sunday they blew a 21-0 second-quarter lead and ended up losing 31-27 to the Indianapolis Colts (4-2).

Cincinnati had to settle for a tie with the Philadelphia Eagles in Week 3 after giving up a late touchdown. And three of the other four losses were by a combined 12 points.

On Sunday, Cincinnati was driving in Indianapolis territory for what would have been a winning score when Colts safety Julian Blackmon picked off Burrow's pass at the 22-yard line with 46 seconds left. Game over.

“I played well for three quarters and 14 minutes," said the rookie from LSU, who had his fourth 300-yard game and is among the top 10 in the league in passing yards with over 1,600.

The Bengals have talent at the skill positions around Burrow and are responding to the spark the 2019 Heisman Trophy winner brought to Cincinnati. Now, if the leaky offensive line and inconsistent defense will just cooperate. All at once.

Taylor insists the organization is “not hitting the panic button” and changing the way it's doing things.

Sunday's late interception not withstanding, Burrow has the confidence and poise of an NFL veteran. He's making the passing game work and can make all the throws. Rookie Tee Higgins is emerging as a weapon, catching six passes for 127 yards against the Colts. Burrow is gradually staying in the pocket longer and took just two sacks Sunday. He was 25 for 39 for 313 yards, but Bengals receivers dropped at least four passes that hit them in the hands. He also ran for a score.

The Cincinnati secondary allowed Colts receivers to run wide open, and Philip Rivers had no problem finding them. Rivers was 29 for 41 for 371 yards and three touchdowns. Some of the throws were made way too easy. “It’s frustrating,” safety Jessie Bates III said. “(We) play very well in that first quarter. Then we kind of fall apart when the game matters.”

WR A.J. Green said he felt like his old self Sunday. After missing all of 2019 because of injuries, he's been hurting this year, too, and had not been a factor. He caught eight passes for 96 yards against the Colts, all but one going for first downs. He made a great catch for 10 yards on fourth-and-9 with 1:48 left to extend the Bengals' final drive.

Defensive coordinator Lou Anarumo. After the Bengals ran up a 21-0 lead early in the second quarter, the defense saw Rivers begin picking them apart. The secondary struggled. For whatever reasons, veteran sack specialists Carlos Dunlap and Geno Atkins spent more time on the sideline than usual. The Bengals had one sack and that was credited to Xavier Williams, who was signed as a free agent last week to plug a hole on the injury-decimated defensive line.

RB Joe Mixon left the game with a right foot injury in the second quarter but returned and didn't seem to be hurting. Taylor said Monday he didn't know if Mixon will be affected this week.

8 — Third downs converted by the Bengals on 17 tries.

Burrow will try to push the Bengals over the line on Sunday at home against the Cleveland Browns (4-2), who are coming off a 38-7 loss to the Steelers. The Browns beat Cincinnati 35-30 in Week 2 and were rolling before the trip to Pittsburgh. Quarterback Baker Mayfield is nursing sore ribs.