Despite loss, Eagles have hope in NFC East 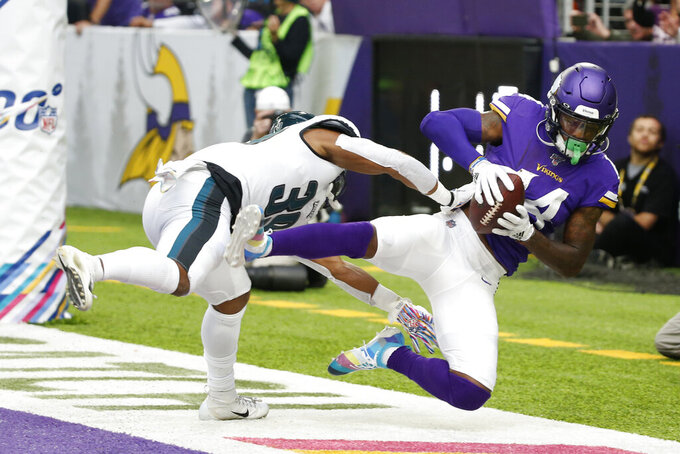 PHILADELPHIA (AP) — The best thing that happened for the Philadelphia Eagles over the weekend took place in a different game between two other teams.

After Kirk Cousins torched Philadelphia's depleted secondary and the Minnesota Vikings rolled to a 38-20 victory Sunday, the New York Jets knocked off the Dallas Cowboys.

That sets up a first-place showdown between the Eagles (3-3) and the reeling Cowboys (3-3) in Dallas on Sunday Night Football.

Eagles coach Doug Pederson confidently declared in his weekly radio interview Monday morning that his team was going to win the game. He later declined to call it a guarantee.

"Never said guarantee a win. I'd never do that," he said at his news conference.

Pederson also said he has no regrets about saying it.

Throwing the ball to rookie running back Miles Sanders has been the only way for the offense to get big gains since wide receiver DeSean Jackson was injured in Week 2. Sanders had a 32-yard TD catch and a 45-yard reception that set up a score against Minnesota. He already has five catches of 30-plus yards and is third on the team with 219 yards receiving.

The secondary is struggling. Rasul Douglas was beat by Stefon Diggs on touchdown passes of 62 and 51 yards. Diggs blew past Douglas on one and safety Malcolm Jenkins blew his assignment to help on the other. Sidney Jones had costly penalties and poor coverage. The Eagles are missing starters Ronald Darby, Jalen Mills and Avonte Maddox and key backup Cre'Von LeBlanc. Darby and Mills might return this week, though Mills hasn't played since last October.

Rookie left tackle Andre Dillard played 72% of the snaps after Jason Peters was injured and had some ups and downs against three-time Pro Bowl end Everson Griffen.

Wide receiver Mack Hollins has played 109 snaps over the past three games and has only one catch on five targets. He dropped what should've been a 21-yard TD pass in the second quarter against the Vikings. Kicker Jake Elliott threw an interception on a fake field goal on the next play.

Peters (knee) and linebacker Nigel Bradham (ankle) left the game in Minnesota and Pederson said both are getting second opinions on their injuries. Pederson added both are day-to-day.

4 — The Eagles only had four hits on Cousins and one sack, giving him plenty of time to sit back and pick apart the undermanned secondary. Getting pressure on the quarterback has been a problem for the defense all season — except for 10 sacks against the Jets and Luke Falk last week. They have four sacks in the five other games.

The Eagles visit Dallas. The Cowboys swept the series last year and have won nine of 14.