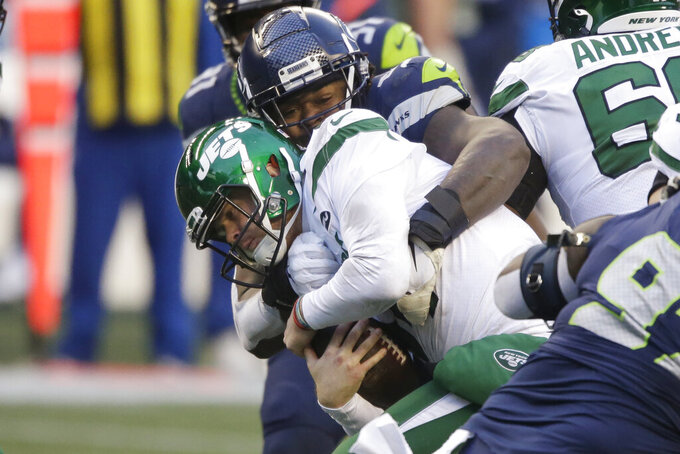 New York Jets quarterback Sam Darnold is sacked against the Seattle Seahawks during the second half of an NFL football game, Sunday, Dec. 13, 2020, in Seattle. (AP Photo/Lindsey Wasson)

NEW YORK (AP) — It's beginning to feel a lot like a somber farewell tour for Sam Darnold.

The New York Jets quarterback's future with the team is uncertain, particularly because the 0-13 squad appears on a collision course with a franchise-changing decision. They currently hold the No. 1 pick in the NFL draft in April, and it would seem like a no-brainer that Clemson star Trevor Lawrence would be the choice — if he decides to leave school.

That would render Darnold as old news, a once-promising symbol of hope whose time is suddenly up.

“I'm not worried about speculation or what others are saying outside of our locker room,” Darnold insisted Monday. “For me, I'm worried about playing good football down the stretch and really taking it one day at a time and one game at a time.”

But again, that time and those games are running out.

Darnold has struggled mightily this season, dealing with two stints on the sideline because of shoulder injuries, then not performing anywhere close to what many — himself included — expected in his third season. He went just 14 of 26 for 132 yards in New York's 40-3 loss at Seattle on Sunday.

The fact he hasn't been able to raise his level of play and, in turn, improve those around him is concerning. The QB-coach marriage between him and Adam Gase also has been a failure, evident in Darnold's regression. The Jets also haven't done enough to provide Darnold with consistent playmaking help.

Despite all that, Darnold still believes he is the future of the franchise.

“Yeah, I do,” Darnold said. “I mean, I believe in myself as a quarterback and as a player in this league. Obviously, that decision isn't up to me, but I'm always going to believe in myself. I have the utmost confidence in myself to be able to go out there and play good football on Sundays.”

The problem is he hasn't shown that since a late promising stretch last season. Gase believes that's hardly all Darnold's fault.

“It's frustrating to see, especially early on in the game, a lot of the things that he's doing, he's doing the right things,” Gase said, “and we're having breakdowns around him. ... It's not just him. It's got to be the guys around him. Everybody's got to do their jobs.”

That all has many wondering if a change of scenery — a trade, perhaps — in the offseason might do Darnold some good.

“I love it here, I love the people around here, I love living here,” Darnold said. “I've always said I want to be a Jet for life. But again, that decision is not necessarily up to me. But that's how I feel.”

The first offensive series. The Jets are having success early in games, scoring on their first possession in a franchise-record seven straight games. They have two touchdowns and five field goals in that span, which is the longest active streak in the NFL. It's everything after that first series that has been a problem.

Red-zone defense. New York allowed Russell Wilson and the Seahawks to score touchdowns on five of six trips inside the 20-yard line. The Jets were playing under a new coordinator in Frank Bush after Gregg Williams was fired last week, but many of the same problems that plagued them this season remained evident in Seattle.

Corey Ballentine. The Jets' kick return game has lacked any real juice the entire season, but Ballentine provided a bit of a spark with a 66-yard return in the second quarter and finished with 100 yards on three returns. Claimed off waivers from the Giants on Nov. 11, Ballentine has averaged 29.7 yards on seven returns with the Jets.

Sergio Castillo. The kicker has a fascinating back story, one of perseverance as he went through the CFL and other leagues before getting another chance in the NFL. But this opportunity might be over soon. Castillo, playing for the injured Sam Ficken, missed three field goal attempts Sunday and an extra point last week against Las Vegas. The Jets also claimed kicker Chase McLaughlin off waivers from Jacksonville.

DB Saquan Hampton will miss the rest of the season after suffering a ruptured Achilles tendon at Seattle. ... LB Jordan Jenkins' availability is uncertain after he missed the game with a shoulder injury. ... Gase is hopeful Ficken and RB La'Mical Perine (ankle) could return to practice this week. ... WR Denzel Mims missed the game to handle a family issue, but is back in the team's COVID-19 protocols and is expected to play Sunday.

185 — That was the Jets' total yards against the Seahawks, a season low — and against the NFL's 31st-ranked defense. Only 20 of those yards came in the second half.

The Jets will head west again, this time to take on the Los Angeles Rams. As if New York's offense didn't have enough problems, it will have to try to get something going Sunday against the NFL's No. 1-ranked overall defense.