Despite struggles, Eagles still have a chance in NFC East 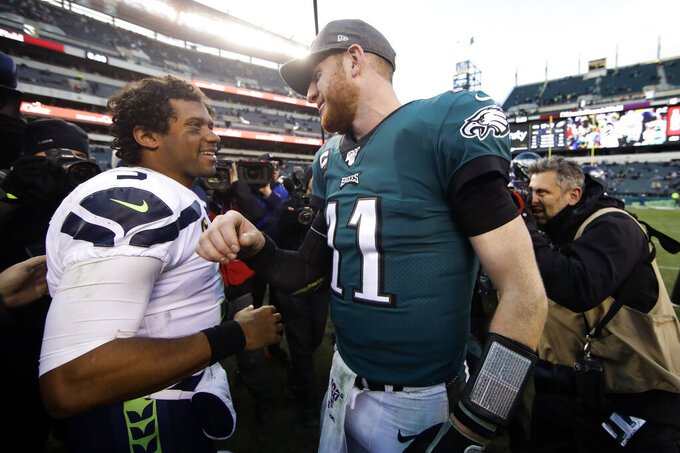 PHILADELPHIA (AP) — The path to an NFC East title for the Philadelphia Eagles is simple and they don't have to rely on outside help if they take care of their own business.

Winning is the hard part.

Following consecutive losses to New England (10-1) and Seattle (9-2), the Eagles (5-6) are still only one game behind Dallas (6-5) in the division. Four of their last five games are against teams currently with a 2-9 record. The other is a home game against the Cowboys in Week 16.

If they win all five, they will secure the division. So despite a dismal offensive performance for the second straight game, the Eagles have a chance now that the toughest part of their schedule is out of the way.

"We're still in this thing, the season isn't over," coach Doug Pederson said Monday. "Gosh, we have five games, a great opportunity in Miami this week. That gives you hope as you move forward."

Carson Wentz struggled against the Seahawks, turning the ball over four times in a 17-9 loss. But the offense was missing its top three wide receivers, leading rusher and two Pro Bowl offensive linemen.

Wentz completed 33 of 45 passes for 256 yards, one touchdown, two interceptions and two fumbles, including one on a handoff exchange. But he got little help from his receivers.

"It's not always about the quarterback," Pederson said. "We can coach that up, obviously, and we will, but we also have to get the other guys in the right spots as well."

The passing game is struggling. Wentz has no deep threat with DeSean Jackson out for the season. Alshon Jeffery and Nelson Agholor didn't play against Seattle, though both have been plagued by costly drops. Greg Ward came off the practice squad and made six catches, one more than second-round pick J.J. Arcega-Whiteside has the entire season. Jordan Matthews played two games and was released Monday.

The entire defense has stepped it up, allowing just 17 points to Tom Brady and the Patriots and 17 to Russell Wilson and the Seahawks. The return of cornerbacks Jalen Mills, Ronald Darby and Avonte Maddox has been a significant boost for the secondary. The pass defense has allowed fewer than 225 passing yards in five straight games and opponents have scored 17 or fewer points in four straight.

Wentz hasn't looked like the guy who finished third in NFL MVP voting in his sophomore season. Lack of talent around him is the biggest reason but it also appears he's having issues with some of his mechanics and he could be pressing, trying to live up to the pressure of the $128 million contract he signed before the season.

Right tackle Lane Johnson is in concussion protocol but expected to return to practice Wednesday. Right guard Brandon Brooks is dealing with anxiety issues. Running back Jordan Howard has missed two games with a stinger and remains day to day. Jeffery (ankle) and Agholor (knee) could be ready to return this week.

12 — Tight end Zach Ertz led the Eagles with a season-high 12 receptions for 91 yards and one TD vs. Seattle. Ertz has a franchise-record 11 games with 10-plus receptions. Tony Gonzalez (15) is the only tight end in NFL history with more. Jason Witten also has 11.

The Eagles visit Miami (2-9) on Sunday and already are a nine-point favorite despite losing two straight home games. Dolphins quarterback Ryan Fitzpatrick threw for 402 yards, four TDs, including a pair of 75-yard TDs for Tampa Bay in a 27-21 win over the Eagles in Week 2 last season.