Digging it: Bills unveil new wrinkle in opening against Jets 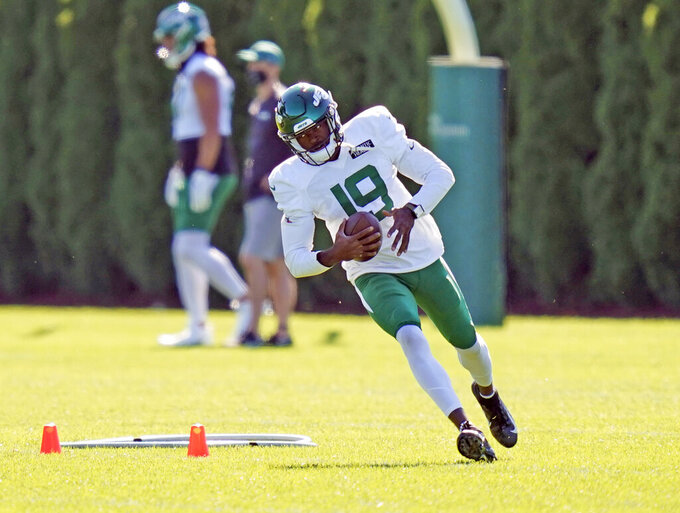 FILE - In this Thursday, Aug. 20, 2020 file photo, New York Jets' Breshad Perriman participates during practice at the NFL football team's training camp in Florham Park, N.J. The New York Jets are getting healthy again at just the right time. Wide receivers Breshad Perriman and Denzel Mims practiced fully Wednesday, Sept. 9, 2020 and are expected to be healthy for the season opener against the Bills in Buffalo on Sunday. (AP Photo/Seth Wenig, File)

ORCHARD PARK, N.Y. (AP) — The day Stefon Diggs has been waiting for since March has finally arrived. It's time for the receiver to make his debut with the Buffalo Bills.

“It’s time for a new beginning,” Diggs tweeted on March 16, a day before Buffalo a cquired the sixth-year player in a trade with Minnesota. Nothing has changed since.

“I would say since I got traded, I haven’t stopped thinking about playing ball,” Diggs said as Buffalo prepares to open the season by hosting the New York Jets on Sunday.

“Definitely something I’ve been carrying a big chip on my shoulder,” he added, before explaining this is no different from any other season for a dynamic play-maker who still feels slighted for being selected in the fifth round of the 2015 draft. “I’m looking forward to it, especially with a new journey, a new challenge each and every year. I’m eager. I’m ready.”

For a team considered to have an early season edge in returning mostly intact following a coronavirus-altered offseason, the Bills gave up a first-round draft pick to land Diggs to add a spark into a Josh Allen-led offense that struggled to score points.

Buffalo managed 20 or fewer points 11 times last season, including a 22-19 overtime loss to Houston in an wild-card playoff.

Diggs, who has topped 1,000 yards in each of his previous two seasons, provides Buffalo an established trio of receivers, rounded out by 2019 free agent additions: John Brown and Cole Beasley.

The Jets, by comparison, feature numerous questions marks in opening against the Bills for a second straight year.

New York’s offensive line has been reshuffled from a season ago. Their group of receivers are limping. And the Jets defense — one of the few bright spots last year — is without linebacker C.J. Mosley (opted out) and star safety Jamal Adams, whose contract complaints led to him being traded to Seattle for safety Bradley McDougald.

General manager Joe Douglas opened the week aware of the knocks directed at a team in the midst of a nine-year playoff drought.

New York is the fourth NFL team since the 2010 season to start five different players on the O-line in Week 1 from the five who started the opener the previous year.

Center Connor McGovern, right tackle George Fant and right guard Greg Van Roten were all signed in free agency, and left tackle Mekhi Becton was taken with the No. 11 overall pick in the draft. Left guard Alex Lewis is the only holdover, but he didn’t start right away.

Allen is far more comfortable preparing for his second season-opening start than he was a year ago, when Buffalo overcame a 16-0 deficit in a 17-16 win at the Meadowlands.

Buffalo’s opening two drives ended with a fumble and Mosley returning an interception for a touchdown. Allen sealed the win with a 38-yard TD pass to Brown with 3 minutes left.

“I wouldn’t call it night and day, but I do feel really good about myself going into the game,” he said, emphasizing a need for a better start.

Sam Darnold, who like Allen was one of five quarterbacks selected in the first round of the 2017 draft, had a different take on last year's opener. The Jets combined for four first downs and 54 net yards on their final four possessions, and Darnold was diagnosed with mononucleosis a few days later.

“Thanks for reminding me,” he said with a laugh, noting he's reviewed the game film. “I think it was good because you look back and see all the improvements we made throughout the year. ... I am going to take that experience and run with it.”

Frank Gore is on the other side of this AFC East rivalry this year, now with the Jets after playing with the Bills last season.

The 37-year-old running back, the third-leading rusher in NFL history has impressed his new teammates with his work ethic. He’s routinely at the facility long before most of the other Jets players.

“I can’t really go into each and every detail what he does because I’ll be here all day,” fellow running back Le’Veon Bell said. “Just know he does a lot for me. I don’t think he knows or realizes all the things he does.”

“I’m feeling blessed, but it’s behind me now.,” said White of a four-year, $70-million deal that locks him up through 2025. “Honestly now, I want to focus on the Jets and try to have the best season yet.”