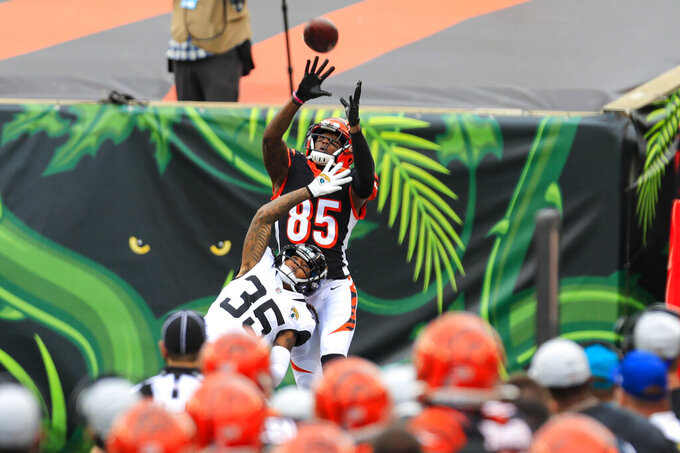 Jacksonville Jaguars coach Doug Marrone could have fired his defensive coordinator or his analytics adviser following a paltry performance at Cincinnati on Sunday.

Instead, he defended both.

No one was buying either argument.

The Jaguars were gouged on the ground and picked apart by a rookie quarterback in a 33-25 loss to the Bengals, who dominated the second half to get their first victory of the season. The Jaguars (1-3) have dropped three in a row.

Maybe Marrone felt bad for his close friend and defensive coordinator Todd Wash when the coach made what many would consider a boneheaded decision to try for a 2-point conversion after Jacksonville scored a touchdown to slice into a 14-point lead with 6:14 remaining.

“I don’t like getting heavy into the analytics with what we do, but it gives you a better chance to win the football game, and that’s what we’re trying to do,” Marrone said.

Marrone insisted he was being aggressive, trying to “put pressure on them" and make it "a little bit different ballgame.” But the Jaguars failed to get the extra two points, leaving them in need of a touchdown and a 2-point conversion to tie the game in the waning minutes.

It ended up being mostly a moot point since Randy Bullock added his fourth field goal and pushed the lead to 11.

It also partly overshadowed one of Jacksonville’s worst defensive outings in franchise history. The Jaguars allowed 505 yards, the 12th time in franchise history they've surrendered more than 500. Three of those have come in the past eight games. This one came against a Cincy team that entered the week ranked 27th in total offense and dead last in yards per play.

“There was a lot of effort. That’s what I just told the team," Marrone said.

Joe Burrow even turned the ball over once in the end zone when linebacker Myles Jack ripped away a ball intended for tight end Drew Sample.

It was the lone bright spot in an otherwise dismal day for Marrone’s defense.

Burrow completed 25 of 36 passes for 300 yards, with a touchdown and an interception. More telling: he was sacked just once (for no loss) after being taken down a league-high 14 times in the first three games.

“It’s not a matter of, ‘Hey, are you bringing pressure or are you not?’” Marrone said. “We’re doing it, but we’re not getting any results out of it. Still got to win the one-on-one stuff and try to rely on someone and get someone free. It’s tough in this league.”

Joe Mixon ran 25 times for 151 yards and two touchdowns, with most of that coming in the second half. He had 12 carries for 30 yards at the break.

“In the second half, they really just started hitting one way and cutting back and testing our responsibilities,” veteran defensive tackle Abry Jones said. “We didn’t execute properly. Every man on defense has a gap and we’ve got to be able to trust every man on that field to make their play when it comes to them.”

It certainly didn’t help Jacksonville that it lost three defensive starters during the game. Rookie cornerback CJ Henderson went to the locker room with a left shoulder injury. Linebacker Myles Jack left with a sprained right ankle. And nickel cornerback D.J. Hayden was carted away with a hamstring injury.

Those woes aside, the Jaguars have significant issues on that side of the ball. Henderson, the ninth overall pick in the NFL draft, has been a disappointment since a stellar showing in the opener. Defensive tackle Taven Bryan hasn’t made an impact, and high-priced, free-agent signee Joe Schobert misses tackles and takes poor angles regularly.

“Well, first I want to say that the Bengals are a good team,” receiver DJ Chark said, showing support for his beleaguered teammates. “I know the record may not show that. But Joe Burrow is a hell of a player and they have a hell of an offense. They’re not going out there and getting beat 30-something to zero. It was bound that team was going to get a win. Unfortunately, it was against us.

“The mood in the locker room is basically we’ve got to stick together. I read Twitter and a lot of times we are the laughingstock because people love making jokes when they’re not in the fire with us. But, you know, at this point, it’s forget them.”