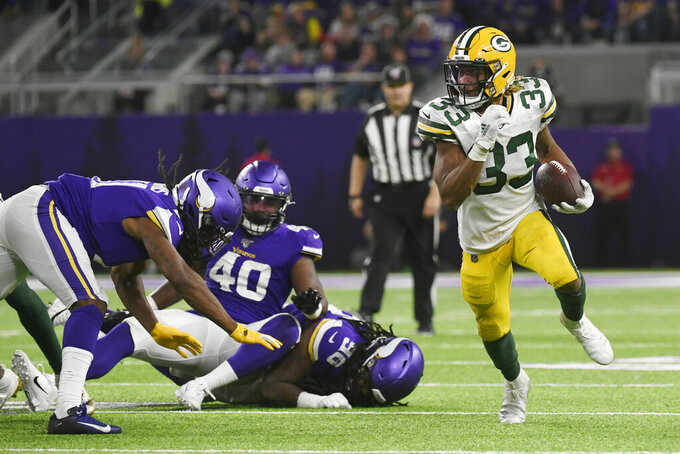 Green Bay Packers running back Aaron Jones (33) carries on a 56-yard touchdown run during the second half of the team's NFL football game against the Minnesota Vikings, Monday, Dec. 23, 2019, in Minneapolis. (AP Photo/Craig Lassig)

Division titles are standard preseason talking points around the NFL, and for the past quarter-century they've been the minimum expectation for the Packers. Considering their two primary rivals won the NFC North the past two years, though, this was a bold objective under a new coaching staff with so many inexperienced players at the offensive skill positions.

Quarterback Aaron Rodgers sensed a difference midway through training camp, a higher energy from the defense and a stronger chemistry within the team from the previous two seasons.

As it turned out, the Packers (12-3) had the winning formula to match their ambition, even if they didn't accumulate many style points along the way. Their performances on the road against the previous two division champions were choice examples, from the gritty 10-3 win over Chicago in the opener on Sept. 5 to the sound 23-10 defeat of Minnesota on Monday that clinched first place.

“There's a lot of emphasis on looking pretty or dominating in a way that befits your explanation, but I thought tonight was a really good performance for us," Rodgers said afterward. He added: “It doesn't matter how we get it done as long as we get it done.”

Beating the Vikings at U.S. Bank Stadium, where the Packers lost in their first three visits, was especially satisfying.

“To win it in this stadium where a couple of years ago I was jeered leaving the field after breaking my collarbone,” Rodgers said, "it feels pretty good."

The Packers need only to close the regular season with a win at Detroit on Sunday afternoon to secure a first-round bye for the playoffs. If Seattle beats San Francisco to win the NFC West on Sunday night, the Packers will have the No. 1 seed and get to stay at Lambeau Field for the whole month of January until the Super Bowl if they make it that far.

“There’s not a lot of people that like to come up to the freezing cold and play us,” defensive tackle Kenny Clark said. “I know that for a fact. It feels good.”

With a league-leading 19 total touchdowns, Aaron Jones has quite the bulwark for an offense that has lacked a down-field spark beyond star wide receiver Davante Adams. Jones had just 45 yards on 10 rushes in the first half at Minnesota, but LaFleur's consistent commitment to the run again paid off. Jones delivered the finishing shot with a 56-yard touchdown scamper in the fourth quarter, with Vikings linebackers Eric Kendricks and Anthony Barr sidelined by injuries.

“I've always tried to do what the team needed. I think there's been times over the years where I needed to do some of those things I've done over the years. This year it's different based on the personnel that we have and the scheme that they were running,” Rodgers said. “I'm trying to be opportunistic, but we've got a pretty good run game going.”

The Packers had only nine turnovers in their first 14 games, but whether it was a blip or not, the ball security at Minnesota was a problem. They fumbled four times, losing two.

“Thankfully our defense, again, they came up big and kept it competitive because that game could have got ugly really fast,” LaFleur said.

Za'Darius Smith has been the subject of frequent adulation for his leadership of the defense in his debut season with the Packers, and his performance on the field has made an equally positive impact. He's up to sixth in the league with 13 1/2 sacks, after racking up 3 1/2 against the Vikings and totaling five tackles for loss.

“When you have guys who can single-handedly take over games, it covers up for a lot of stuff on a squad,” Rodgers said, “and we're pretty lucky to have him.”

Tight end Jimmy Graham. The five-time Pro Bowler's second season with Green Bay has been even less productive than his first. He had one catch for 16 yards against the Vikings that he fumbled near the sideline, but Geronimo Allison recovered to keep a drive alive that ended in a field goal at the end of the second quarter.

The Packers took a remarkably healthy lineup to Minnesota for this stage of the season, and they left in decent shape, too. Backup running back Jamaal Williams hurt his shoulder in the third quarter and didn't return.

4 — The amount of times in the past 17 seasons the Packers have reached 12 victories. If they win this week, they'll have their best record since going 15-1 in 2011 and just their third 13-win team since their back-to-back Super Bowl appearances following the 1996 and 1997 seasons.

The Packers need to beat Detroit to keep pace for a first-round bye, so staying at full strength for the playoffs won't be as simple as pulling the starters to be safe. The Lions have lost eight straight games, however, and quarterback Matthew Stafford's season is over because of hip and back injuries, so the opportunity to build a big lead and give the backups some action could arise.