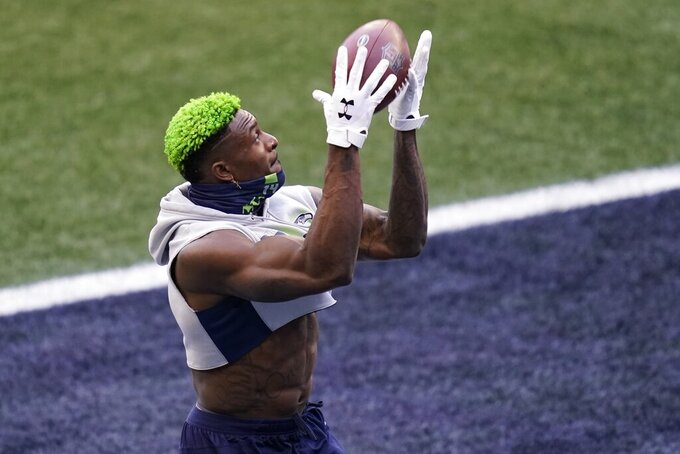 Seattle Seahawks wide receiver DK Metcalf catches a pass as he warms up before an NFL football game against the Los Angeles Rams, Sunday, Dec. 27, 2020, in Seattle. (AP Photo/Elaine Thompson)

RENTON, Wash. (AP) — As DK Metcalf was finishing up his rookie season a year ago, he took a glance at the Seattle Seahawks record book.

After having 900 yards receiving as a rookie, Metcalf knew the single-season franchise record was well within reach.

“I knew it was going to be on the agenda this year to break it,” Metcalf said.

Metcalf will likely need just one catch Sunday to topple the record that has stood for 35 years.

He is six yards shy of besting Steve Largent’s single-season franchise record. Largent had 1,287 receiving yards in 1985, the best of a nine-season run during which the Hall of Famer topped 1,000 yards eight times. Largent only failed to reach the mark during the strike-shortened 1982 season.

The Seahawks can only hope this season is the beginning of a similar run by its young second-year star, who with each passing week looks more like one of biggest draft steals in recent memory.

“He can make every catch, do everything you want him to do,” quarterback Russell Wilson said. “To be even mentioned in the same category as a guy like Steve Largent so early is a blessing in itself.”

Metcalf goes into Week 17 against San Francisco already among the elite in the league. He’s sixth in the league in yards receiving (1,282), touchdown catches (10) and yards per reception (16.0). He’s just the second wide receiver in team history to receive a Pro Bowl selection in his first two seasons, joining Brian Blades.

In his first matchup against the 49ers earlier this season, Metcalf had 12 catches for 161 yards and two TDs. The season as a whole has been the exponential jump the Seahawks were hoping to see but weren’t sure if it would happen because of the offseason disruptions caused by the COVID-19 pandemic.

“Just to break a record that’s been standing for so long it’s just a blessing just to be in this position and an amazing opportunity I have in front of me,” Metcalf said.

While Metcalf seemed to be posting big games week after week earlier in the season, his numbers have taken a dip since his first matchup against the 49ers. Metcalf did have a huge game against Philadelphia in Week 12, when he had a career-best 177 yards on 10 catches, but the chunk plays that made Seattle’s offense so potent have been limited. Take away his big game against the Eagles, and Metcalf has just seven catches of 16 or more yards since Week 10. He had 16 catches of 16 or more yards in the first eight games of the season.

“DK understands that. He’s a really smart football player. He’s like, ‘These guys are playing really, really soft. OK, how can I impact the game?’” Schottenheimer said. “Maybe it’s in run blocking or maybe it’s in third down.”

The competition has certainly been a factor. During that stretch, he’s been shadowed by the likes of Jalen Ramsey twice, Patrick Peterson twice and James Bradberry. Still, Metcalf has at least five catches in five straight games.

Metcalf is also hoping Tyler Lockett has a few passes go his way Sunday. Lockett needs 36 yards against the 49ers to reach 1,000 for the season. That would make Lockett and Metcalf just the second combo in team history to reach 1,000 yards in the same season, joining Brian Blades and Joey Galloway, who did it in 1995.

“DK’s gonna still be out there. Tyler’s gonna be out there. We’re going to have our (running) backs. So we don’t care how we do it. We still believe we’re one of the top offenses in the NFL,” Schottenheimer said.