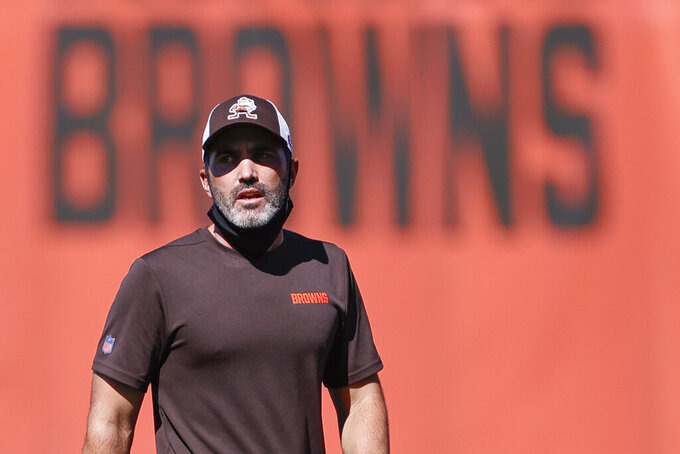 FILE - Cleveland Browns head coach Kevin Stefanski directs practice at the NFL football team's training facility Thursday, Aug. 20, 2020, in Berea, Ohio. The NFL’s process to test for COVID-19 has raised questions and concerns, two-plus weeks before the league plans to kick off the season during a pandemic. BioReference Laboratories said Monday, Aug. 24, 2020 an isolated contamination caused 77 most likely false positive results at its lab in New Jersey. Stefanski had one of the false positive tests, triggering anxiety for him at home with his wife and three children when was informed. (AP Photo/Ron Schwane)

ALLEN PARK, Mich. (AP) — In two-plus weeks, the NFL kicks off its season. That doesn't leave the league much time to resolve significant issues about its COVID-19 testing procedures.

BioReference Laboratories, which is conducting tests for the league, said Monday an isolated contamination caused 77 “most likely false positive results,” at its lab in New Jersey. Eleven clubs were affected, and the tests were re-examined and found to be false positives.

“This has been an interesting dynamic because what happened this weekend gave the NFL an opportunity to do a sort of a test fire drill," noted Dr. Larry Caplin, who said he consults nearly 20 NFL players and their union about testing protocols, “It exposed issues and potential vulnerabilities in their process, and a lot of it relates to the speed in which they’re able to confirm results."

Among teams reporting false positives, the Minnesota Vikings had 12 team members, the New York Jets 10, the Chicago Bears nine and the Detroit Lions one. In all, 44 players and 33 club personnel drew false positives.

“It’s probably good that it happened now since we’re able to adjust and adapt and figure out the things if it did happen during the season, and kind of what we would do from there," Vikings coach Mike Zimmer said.

Five labs across the country process PCR tests for the league's 32 teams and only the New Jersey facility had false positives on Saturday.

The Jets canceled a walk-through Saturday night, but had a full practice Sunday morning after the previously positive tests came back negative. The Bears moved their practice scheduled for Sunday morning to the afternoon.

The Cleveland Browns initially canceled practice, but after re-testing turned up negative tests they decided to have their workout — without their coach.

Browns coach Kevin Stefanski had a false positive test, triggering anxiety for him at home where he lives with his wife and three children.

“I can laugh about it now, but truly it wasn’t fun to have that phone call very early in the morning and not get news that it was potentially an error until later," he said.

Stefanski said he immediately left his house in order to not put his family at risk. The former Vikings assistant went to a condominium near the team’s facility where he stayed before moving his family to Ohio from Minnesota in the offseason. And, it took four hours before Stefanski learned he was negative.

The 38-year-old Stefanski praised the Browns for the way they handled “a fire drill" with their virus protocols, adding that being held out of practice gave him and his staff a chance to carry out contingency plans if any coaches are out.

“Everything went off without a hitch and I was able to watch 7 on 7 on my iPad about 10 minutes after it ended," he said. “So, a very unique kind of like a bad dream when you know practice is going on and you’re not there. It felt pretty strange.”

As the NFL moves toward the end of training camp and the start of the season, the scope of testing may expand to family and friends of players.

“I’ve had discussions with senior people at the NFLPA and we’re talking about some recommendations that the league hasn’t put into place yet around creating a secondary bubble," said Caplin, who has 30 years of logistics experience and is the CEO of Pennsylvania-based DOCS Health that helps schools, the military and other clients with healthcare. “That would include potentially testing the people that the players interface with on a regular basis when they’re home."

Caplin, though, acknowledged there is not a foolproof system in place for any entity to test for COVID-19.

“There is no perfect test, start there," he said. "All testing has potential to have false positives — or false negatives."

Buffalo Bills quarterback Josh Allen lamented having a false positive test that kept him off the field Sunday.

“I was super frustrated that I wasn’t here," Allen said. “Those are reps that I can’t get back. At the same time, I think it was a good opportunity for our team to kind of go through a day of adversity like this ... in case it were a game day."

The games have gone on for the NBA playoffs, which have been played uninterrupted in a bubble in Central Florida. The NHL, likewise, has pulled off its postseason plans with its own version of bubbles in Toronto and Edmonton, Alberta.

Major League Baseball, meanwhile, is attempting to play without a so-called bubble and has had to cancel dozens of games due to positive tests.

“The NBA has created an island and everyone on the island gets tested continuously and monitored, and they don’t allow anyone exposed on the island," Caplin said. “That’s the ideal way to operate. The second best is what the NHL is doing, which is basically they created two bubble environments where they're also testing the people working in the restaurants and the people working in the hotels."

The NFL has no bubble plans for this season, and the Miami Dolphins announced Monday their plan for having fans at their first home game on Sept. 20.

Asked whether more or exclusive use of point of care (POC) tests at NFL team facilities would help reduce the chances for a recurrence of the weekend's false positives, the NFL's chief medical officer noted the difficulty of such a process.

“We're looking actively at the role of the POC machines, getting much more data on them,” said Dr. Allen Sills. “Some people asked why not use them for all tests? ... The supply chain of reagents is not as robust and we're not able to do the tens of thousands of tests we've been doing solely with POC."

Sills also mentioned the time it takes to run them, and their different accuracy profile compared to the PCR tests.

“We do believe that the problem has been corrected,” Sills added. “Many of our club personnel saw it as an opportunity to see in real time how we would treat these situations.”

The NFL tested all players and personnel before beginning training camp and said 53 of 2,840 players — or 1.9% — were positive. During daily testing through Aug. 11, the league said more than 100,000 tests have been processed and 0.46% of the results came back positive. The results were even better among players tested from Aug. 12 to 20 with zero positive tests, according to the NFL.