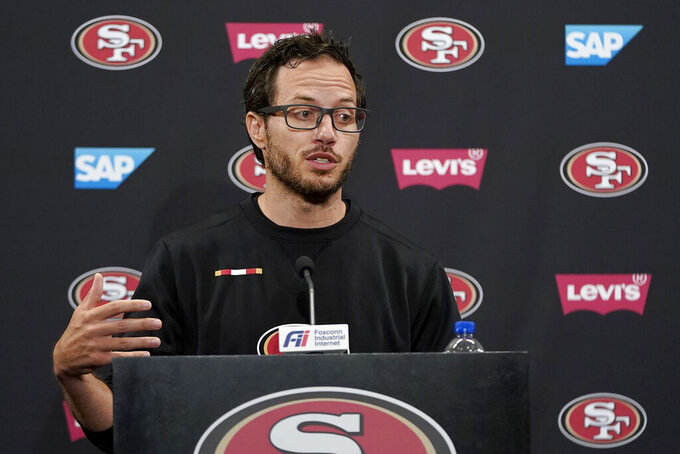 The Miami Dolphins hired San Francisco 49ers offensive coordinator Mike McDaniel as their head coach Sunday, making him the first minority candidate to get hired so far this offseason.

McDaniel, who is biracial, replaces Brian Flores, who was fired despite posting winning records in the final two of his three seasons in Miami.

Flores sued the NFL, the Dolphins and two other teams last week over alleged racist hiring practices for coaches and general managers, saying the league remains “rife with racism” even as it publicly condemns it.

McDaniel had worked under 49ers coach Kyle Shanahan for the past 11 seasons and gets his first shot as a head coach after only one year as offensive coordinator.

McDaniel was credited for his role in developing San Francisco's creative running game that featured receiver Deebo Samuel as a running back at times, along with other wrinkles.

“Mike is awesome,” 49ers quarterback Jimmy Garoppolo said last month. “He really is. He’s kind of that, I don’t want to say the mastermind behind everything, but he’s kind of that guy in the background that doesn’t say a whole ton to a lot of people, but his mind is always moving. The ideas that he comes up with are so fresh and new that it’s a cool guy to have on the staff. ...

"He’s a lot smarter than most of us. So he dumbs it down for us and kind of gets us all on the same page.”

McDaniel could bring some of those wrinkles to Miami to feature playmaking receiver Jaylen Waddle in even more creative ways,

The Dolphins struggled offensively this season despite finishing 9-8 in a roller-coaster campaign that featured a seven-game losing streak followed by a seven-game winning streak.

Second-year quarterback Tua Tagovailoa struggled at times and Miami ranked 22nd in the league in scoring this season.

The 49ers had a much more productive offense despite also having a quarterback with limitations in Garoppolo.

McDaniel then joined Shanahan's staff in San Francisco in 2017 as run game coordinator and took over the offensive coordinator role this past season.

The Dolphins’ hiring of McDaniel followed some paths the team has used in the past, most notably how he is yet another first-time NFL head coach.

Of those, including McDaniel, six have come during Ross’ ownership.

And all of those moves have come in the last 18 years, starting with the firing of Dave Wannstedt and Bates being put into place nine games into the 2004 season.

The Dolphins haven't won a playoff game since 2000 for the second-longest active drought in the NFL to the Detroit Lions.

The hiring of McDaniel leaves the NFL with four minority head coaches with openings remaining in Houston and New Orleans. Pittsburgh's Mike Tomlin, Robert Saleh of the Jets and Washington's Ron Rivera are the others.

The 49ers will receive two extra third-round picks the next two years as compensation for developing a minority head coach.