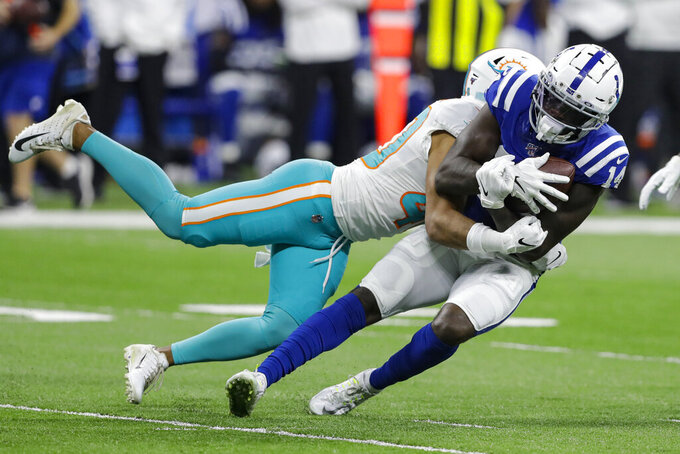 DAVIE, Fla. (AP) — Even more than his teammates, Miami Dolphins rookie cornerback Nik Needham has been waiting a long time for a winning streak.

Needham played for UTEP in college and endured seasons of 0-12 in 2017 and 1-11 last year. He then joined the Dolphins, who lost their first seven games but have since won two in a row.

“Yeah, it feels great to win,” he said. “It’s kind of like you get addicted to it. You need it again.”

The Dolphins play host to Buffalo on Sunday, and Needham will make his fifth start of the season, an improbable achievement that could happen only on a rebuilding team.

He went undrafted in April, was cut by the Dolphins at the end of training camp and then gladly took a place on their practice squad, where he spent the first six weeks of the season.

A trade and injuries opened a spot on the roster. Now Needham is coming off his best game yet and is emblematic of what the Dolphins want this year to be about: improvement.

“He’s starting to see the fruits of his labor in terms of the success on the field,” defensive coordinator Patrick Graham said. “But he knows he still has a long way to go.”

There’s no guarantee Needham will even be good enough to make the Dolphins’ roster next year, when they’re expected to be much improved. But he’s at least in the mix to become part of the team’s long-term plans.

A handful of other young players are in the same situation, including safety Steven Parker, a waiver acquisition after spending last year on the Rams' practice squad. Parker and Needham each made his first career interception in last week’s win at Indianapolis.

Needham also made the tackle to stop the Colts on fourth down to seal the victory. He gets needled about his unlikely path to the NFL.

“We joke with him a lot,” veteran safety Reshad Jones said, “but he’s been progressing and working his tail off to help this team.”

The 5-foot-11 Needham doesn’t have eye-popping size or speed. He played only one year of varsity in high school, received just one college scholarship offer and wondered where his football career was headed — literally.

“Not a lot of people watched UTEP, care about UTEP, even know who we are,” he said. “When I got my offer, I was like, ‘Where is that at?’”

The Miners were terrible in his final two seasons, but he caught the eye of Josh Boyer, the Dolphins’ cornerbacks coach.

The Dolphins signed Needham as a rookie free agent and began molding him into a pro. For starters, Boyer began urging him to lose weight.

“I’d have a bag of chips and he’s on me, like, ‘Throw that away,’” Needham said. “I used to think he was joking, but he was serious, and now I understand what that did for me.”