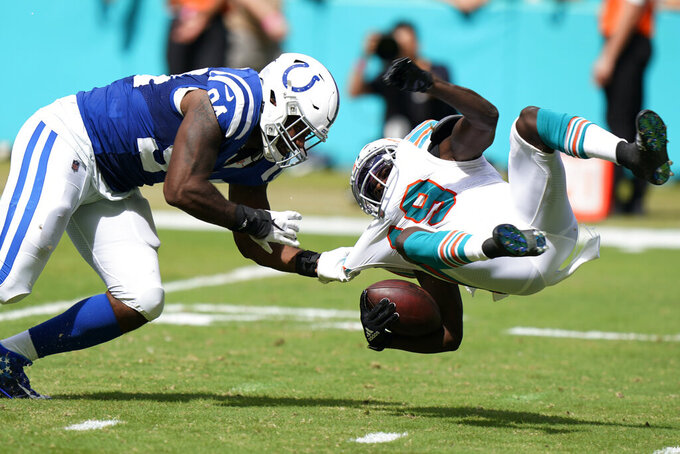 MIAMI GARDENS, Fla. (AP) — The Miami Dolphins have not gotten off to the worst four-game start on offense in the franchise’s 56-year history.

They’re on pace to finish in the bottom 20% of the team’s single-season rankings in a slew of categories — including rushing yards, net passing yards per attempt, passing touchdowns and scoring. And for those who like to keep the math simple, there’s this: Only six teams in Dolphins history have gotten off to worse four-game starts than this one, which has dropped three consecutive contests to fall to 1-3.

Dolphins coach Brian Flores said Monday he believes the issue is clear: What’s working in practice isn’t translating to game days. Diagnosing that problem is easy. Fixing it seems to be the complicated part.

Flores has been consistent in assigning blame: He points the finger at himself — “it starts with me,” he has said multiple times in the last two weeks — and then says the offense, defense and special teams need to all improve. It’s never about one unit, at least in his public stance.

But, fairly or unfairly, the offense jumps off the stat sheet as a major problem.

The Dolphins were 30th in passing yards per game entering Monday, 28th in rushing yards per game. The only other team in the NFL to rank in the bottom five of both categories is the New York Jets.

It’s hard to even find an individual number that looks good when comparing Miami’s offensive players to the rest of the league. Myles Gaskin is the team’s leading rusher; he was 41st in the NFL in yards after Sunday. There are 31 players with at least one 25-yard rush this season; none play for Miami. Jaylen Waddle was tied for 12th after Sunday with 25 receptions; his 200 yards off those catches is 58th in the league.

And then there’s the quarterback spot. Jacoby Brissett has thrown two touchdown passes in 11 quarters of work since Tua Tagovailoa got hurt; both of those TDs came in the fourth quarter of Sunday’s 27-17 loss to Indianapolis.

“We’ve had some good plans going in,” Flores said. “We just haven’t been able to execute and we’re not getting the results we want.”

WR DeVante Parker. He had two big plays when the Dolphins were in full air-it-out mode in the fourth quarter to try and pull off a comeback. Parker got his first touchdown of the season and was targeted nine times by Brissett against the Colts.

Decision-making. There’s no way 4.3 net yards per passing attempt is going to lead to sustainable wins. Flores, correctly, said the Dolphins missed multiple downfield chances on Sunday. Not cashing in on those opportunities is a major part of the problem; hit a few of those, the run defense against Miami softens up, and the dominoes can start falling the Dolphins’ way quickly.

DL Jaelan Phillips. The rookie out of the University of Miami had three quarterback hurries and a half-sack on Sunday, the best game of his very young pro career. He did get flagged for a face mask infraction midway through the fourth quarter that extended an Indianapolis possession and saw the Colts get a touchdown instead of trying a field goal, which is what they’d have done had he not get called for that penalty. Still, the totality of his work Sunday was a step forward.

Brissett. Or, more accurately, the non-fourth-quarter version of Brissett. The last two weeks his rating in quarters 1-3 has been 70.3. In the fourth, 124.1.

WR Will Fuller (broken finger) will not play this week against Tampa Bay, Flores said. Tagovailoa (broken ribs) has resumed throwing but remains out for at least one more game.

1: Entering Monday, there have been 103 instances of someone rushing for 50 or more yards in a game this season. Of those, only one has been recorded by a Miami player.

The Dolphins go across the state on Sunday and will face reigning Super Bowl champion Tampa Bay (3-1). When Bucs QB Tom Brady was coming off his six Super Bowl wins with the New England Patriots, he always went 1-1 against the Dolphins in the subsequent regular season.