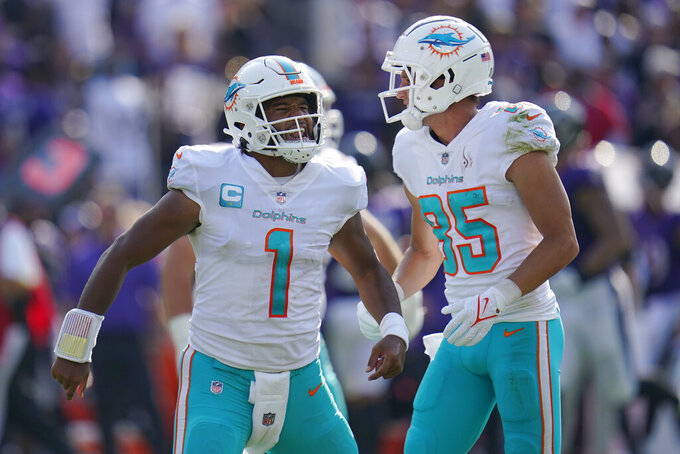 Miami Dolphins quarterback Tua Tagovailoa (1) and wide receiver River Cracraft (85) celebrate a touchdown during the second half of an NFL football game against the Baltimore Ravens, Sunday, Sept. 18, 2022, in Baltimore. (AP Photo/Julio Cortez)

Not just confidence in his understanding of a new offense, but his confidence after making mistakes in games.

“He’s a perfectionist,” McDaniel said last week. “I want his confidence to outweigh his perfectionism.”

Ask Tagovailoa about his confidence and he’ll likely say it is, and has always been, high. But McDaniel said he could sometimes tell when Tagovailoa was too hard on himself after throwing an incompletion.

In Miami’s season-opening win against New England when Tagovailoa completed 23 of 33 passes for 270 yards with a touchdown and no interceptions, McDaniel noticed Tagovailoa would focus on throwing an incomplete pass instead of moving on to the next play.

“If he’s right with his confidence, which I know he’s getting there, then it would be harder for me to tell that he wasn’t happy with the last play,” McDaniel said, “because it’s an understanding of ‘Yeah, I didn’t do that as good. Oh well, I’ll do it perfect next time.'”

That changed a bit during the Dolphins’ comeback win over the Ravens in Week 2, McDaniel said.

Tagovailoa had a poor first half and threw two interceptions, the second of which, McDaniel said left Tagovailoa “absolutely disgusted with himself.”

But he followed with the best statistical performance of his NFL career, particularly in the fourth quarter, when he threw for four touchdowns and 199 yards in the final 15 minutes to erase a 21-point deficit. He finished with six touchdowns and 469 yards overall, the most passing yards by a Dolphins quarterback since Dan Marino threw for 473 yards against New England in 1994.

In the fourth quarter, he had touchdowns of 48 and 60 yards to receiver Tyreek Hill, and two more to receivers Jaylen Waddle and River Cracraft.

“You want to talk about everything we talk about; how coachable the guy is, this is huge, because he stopped worrying about the last play,” McDaniel said. “He went and played and took his responsibilities seriously to his teammates about, ‘Hey, I’m going to lead this team confidently.’ It is what you get into sports for.”

There’s an element of confidence that comes naturally with comfort. And with an offense that seems clearly better than it was a year ago, Tagovailoa said he feels comfortable distributing the ball to the Dolphins’ playmakers and “letting them go to work.”

“I got to hone in on what every play asks of me, and go out there and execute,” he said.

Tagovailoa was drafted to turn the franchise around, but after he hadn’t blossomed as quickly as some expected, questions of whether to keep him or find someone else arose.

Last season, the Dolphins, who lost seven consecutive games at one point, considered trading for then-Texans quarterback Deshaun Watson. Although those talks fizzled at the trade deadline, in large part because of Watson’s sexual assault case, the Dolphins' interest in Watson signaled doubt in their franchise quarterback.

Week after week, Tagovailoa faced questions about whether he felt the franchise was truly all-in on him, to which he always answered with different versions of “yes, of course.”

This season, the Dolphins are 2-0 for the first time since 2018, and both McDaniel and Tagovailoa's teammates have spoken loudly about their confidence in him.

One game’s performance, good or bad, won’t change that.

“We always knew he could be good,” linebacker Melvin Ingram said. “We’re not going let one game define that. He went out and did what we all knew he could do, and we all expect him to do.”