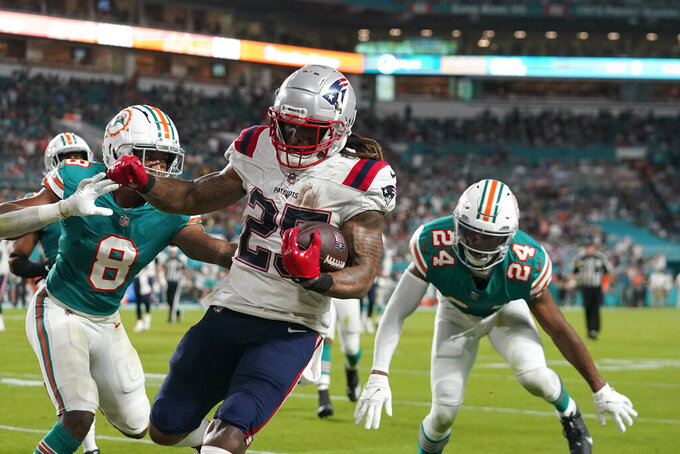 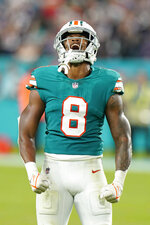 MIAMI GARDENS, Fla. (AP) — They came running off the sideline after the last play, one final sprint of the season, one final moment of joy.

The Miami Dolphins aren't going to the playoffs. But they went into the offseason happy.

Jaylen Waddle had a touchdown grab and set the NFL record for receptions in a rookie year, Tua Tagovailoa used his legs — not his arm — to get a critical first down in the final moments and the Dolphins finished their season by defeating the playoff-bound New England Patriots 33-24 on Sunday.

A team that started 1-7 won eight of its last nine games, finishing 9-8.

“That just shows who we are as men and as a team," linebacker Jaelan Phillips said. “That’s the story of our season. It’s just perseverance."

Xavien Howard returned an interception for a touchdown and Duke Johnson rushed for 117 yards and a score for Miami, which finished with a winning record for the second consecutive season and once again didn’t have a playoff berth to show for it.

Brandon Bolden two touchdowns — one rushing, one receiving — for the Patriots (10-7), who are headed to the playoffs as a wild card. But they were swept by the Dolphins for the first time since 2000 and the outcome handed the AFC East title to the Buffalo Bills, whose game against the New York Jets had not gone final when the Patriots-Dolphins game ended.

The Bills won 27-10, so the Patriots wouldn't have won the division anyway. And hours later, when Las Vegas beat the Los Angeles Chargers 35-32 in overtime, the Patriots' opponent was set — they're going to Buffalo for a wild-card game on Saturday night.

“Played poorly, coached poorly, didn’t do anything very well," Patriots coach Bill Belichick said. “Just too many mistakes. Way too many. We’ll go look at the film, turn the page here, make some corrections and move on to next week. That’s really about it."

The Patriots have played in wild-card games before under Belichick — but have never been to the playoffs in the Belichick era as a wild card. All 17 of the previous playoff appearances in his years there have come after a division title.

That streak didn't end easily, though.

New England needed only eight minutes to cut a 27-10 fourth-quarter deficit to 27-24. Mac Jones connected with Bolden for an 18-yard score on a screen to get New England within 10, Damien Harris rumbled in from a yard out a few minutes later and just like that the Patriots were within three.

“I think it says a lot about our character," Patriots receiver Matthew Slater said. “We’re not going to quit but you know as well as I do, at this time of year, going out there and competing to the end doesn’t mean anything if you don’t have more points than the other team."

Miami took over with 2:53 remaining, on its 25, with no timeouts and Tagovailoa having thrown for the grand total of 2 yards in the second half.

He wound up sealing matters with his feet, not his arm. Facing third-and-8 from his 42 with just inside of two minutes to go and New England poised to get the ball back, Tagovailoa scrambled for 11 yards.

“He got to show off his speed a little bit," Waddle said.

And soon, game over.

“We just beat a tough team," said Tagovailoa, who passed for 109 yards. “All week, that’s what we’ve been harping on. We wanted to end this season with a bang and that’s what we went out there and did."

Jones completed 20 of 30 passes for 261 yards for New England. The Patriots got the ball back with 3 seconds left, needing 98 yards for a score, and Miami's Sam Eguaoven was credited with recovering a fumble that became a game-ending touchdown after a lateral went awry.

“Just proud of this team," Dolphins coach Brian Flores said. “I’m proud of their fight, their resiliency, their ability to deal and battle adversity. We’ve had ups and downs. It’s a year I’ll certainly remember. But yes, very proud of this team."

It was 14-0 Miami in a flash. Waddle entered Sunday three catches from breaking Anquan Boldin’s NFL rookie record of 101 grabs set in 2003 — and the Dolphins got him that in their first four plays. He capped the drive with his sixth touchdown of the year, catching a 7-yard pass from Tagovailoa to opening the scoring.

Howard jumped in front of a pass by Jones and returned it 37 yards on the third play of the ensuing New England possession. It was 17-7 at halftime, Johnson rumbled in early in the fourth for a 27-10 lead and it looked as if Miami had the job done.

Looks were deceiving, but the Dolphins held on.

New England lost OL Isaiah Wynn to an ankle injury in the second quarter. He walked up the tunnel leading to the locker room without much difficulty. RB Rhamondre Stevenson (head) and DB Sean Davis (shoulder) also had first-half injury issues for the Patriots and DL Christian Barmore was hurt on the Tagovailoa scramble with 1:48 remaining. For the Dolphins, S Eric Rowe limped off in the third quarter with a back injury and didn't return.

Miami became only the second team to win both of its AFC East meetings against New England in the past 21 years. Buffalo did it in 2020; before that, Miami and the New York Jets both did it in 2000.

Patriots: At Buffalo on Saturday night in a wild-card game. The teams split their two regular-season matchups, with the road team winning each time.