Dolphins will be ready to face either Colts quarterback 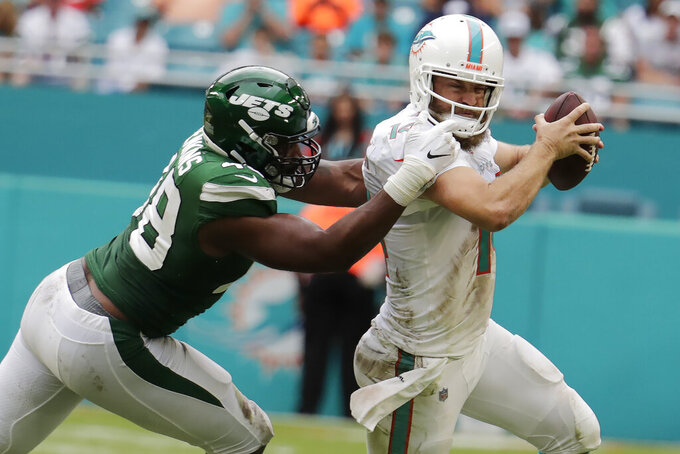 INDIANAPOLIS (AP) — Colts quarterback Jacoby Brissett won't be playing against the Dolphins because of an ailing knee.

But Miami coach Brian Flores doesn't need to scramble through game tape for a scouting report. He saw up close for the better part of the last two seasons when both were with New England.

Hoyer, who finished last week's game after Brissett was injured, knows what he's up against in Flores.

"Brian Flores is an incredible coach. I've known him since my rookie year," said. "I was away from him and then I came back to see him as the defensive coordinator. I know their offensive staff and their scheme."

The Colts (5-3) have plenty at stake Sunday.

They have struggled to score the past two weeks and their vaunted offensive line has allowed nine sacks during the span. Penalties have been costly and so have special team miscues. And now Indy has lost Brissett , who sprained the medial collateral ligament of his left knee in last weekend's loss at Pittsburgh . The defeat knocked the Colts out of the AFC South lead.

"This business is brutal," Colts coach Frank Reich said. "You lose and you feel the sting of it and you feel like your back is against the wall and we have to respond."

Flores has faced the same scenario — seven times this season.

It's a stark contrast from his days of routine victory celebrations in New England, for whom he was a longtime assistant. Instead, he's running the rebuilding Dolphins (1-7) who are trying to build momentum after their first win last week.

But Flores knows it will be a tough task against a quarterback who earned his respect backing up Tom Brady.

WELCOME TO THE CLUB

Freeney played 11 seasons in Indianapolis, becoming the franchise's career sacks leader with 107½, and was part of the Colts' 2006 Super Bowl winning team. He ranks second on the Colts' career list, behind bookend rusher Robert Mathis, now an assistant on Reich's staff.

Former general manager Bill Polian selected Freeney in the first round of the 2002 draft, when critics described the selection as a "reach." But Freeney and his trademark spin move quickly became part of Colts lore.

"What did I learn from him? I learned not to spiral into a hole when you get beat because he used to pretty much have his way with me," longtime left tackle Anthony Castonzo said. "I just thank God I never had to play against him in a game."

The Dolphins have lost four of their best players in the last two weeks.

Only two starters have played in every game this season — receiver DeVante Parker and left guard Michael Deiter.

The Colts hope Freeney's induction won't be the only major milestone they hit Sunday. They need one more victory to reach 300 in the franchise's Indianapolis era.

With Walton out, Kalen Ballage is expected to start Sunday. The second-year pro is averaging 2.0 yards on 35 carries this season, and Miami's average of 3.1 yards is the NFL's worst.

"I hear the stats; I know what they are," Flores said. "Everyone is involved in the run game — backs, tight ends, receivers. I can pull up 20 runs right here today where if a receiver makes a block, it's a much longer run, and that average jumps a little bit. We all have to be better."

"I've played all right," he said. "Opportunities have been slim. Moving forward, it's about getting in there and getting a rhythm and being able to touch the ball more."