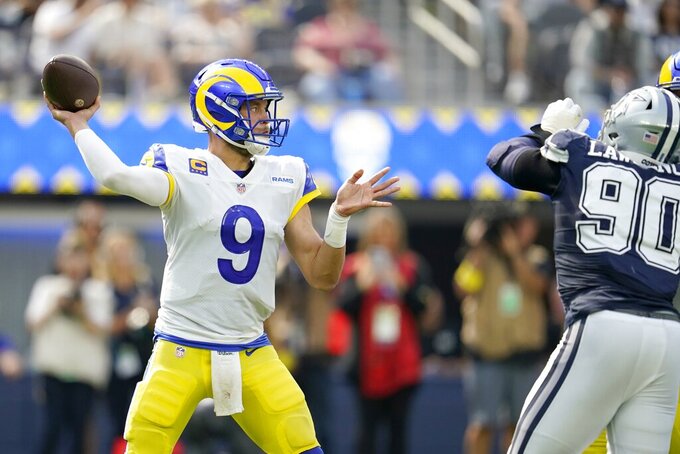 “It was a surreal moment,” Lawrence said of his second touchdown in nine NFL seasons. “When the ball came out and it hit my feet, I was like, ‘This can’t be true.’ When I turned around and I didn’t feel nobody around me, I was like, ‘This is real!’”

The Cowboys' impressive start to the season without Dak Prescott is also very real — and not even the defending Super Bowl champions could slow them down.

Lawrence returned a fumble 19 yards for a touchdown on the Rams’ opening drive, and Cooper Rush remained unbeaten as the Cowboys' fill-in starter despite passing for just 102 yards in a 22-10 victory over Los Angeles on Sunday.

Tony Pollard made an outstanding 57-yard TD run for the Cowboys, who are off to a 4-1 start for the second consecutive season after racking up four consecutive wins without Prescott, who seems close to a return from thumb surgery.

Armstrong forced the fumble returned by Lawrence and later blocked a punt in the first quarter for Dallas, which got 86 yards rushing from Pollard and 78 more from Ezekiel Elliott. With Rush going 10 for 16, the running game and the Cowboys' solid defense took charge.

“Oh, it shifted the whole momentum,” linebacker Micah Parsons said of the big play by Armstrong and Lawrence. “You start how you finish. We started with a bang, and we ended with a bang.”

Indeed, Parsons' strip-sack of Stafford on the Rams' final play punctuated a rough day for LA.

Cooper Kupp had a 75-yard touchdown reception for the Rams (2-3), who fell below .500 for only the second time in coach Sean McVay's six seasons while getting shut out in the second half.

“This is some adversity that we’re facing right now,” McVay said. “You find out a lot about people when you do go through that. It’s not good enough right now. I’ll never pretend that it is.”

With three missing starters, the Rams' offensive line struggled to provide any support for an inert running game or for Stafford, who passed for 308 yards and was sacked five times. Kupp's brilliant catch-and-run is the only touchdown scored by the Rams in their past nine quarters of play, including back-to-back losses to San Francisco and Dallas.

“I think we played two really good fronts the last two weeks, and they presented some unique challenges,” Stafford said. “I thought we had a great game plan going into both. It’s just about executing at a little bit of a higher level.”

Malik Hooker made a clinching interception with 3:29 to play in a rematch of the first regular-season game in the history of SoFi Stadium, the multibillion-dollar football palace built by Rams owner Stan Kroenke and championed by Cowboys owner Jerry Jones. Los Angeles beat Dallas 20-17 in that fan-free encounter to open the 2020 season.

The Rams settled down from the early chaos and even took the lead in the second quarter when Kupp caught a short pass one-handed and ran the final 71 yards on the longest play in the remarkable career of last season's NFL Offensive Player of the Year.

But Pollard put the Cowboys back ahead 92 seconds later, breaking a handful of tackles on the second-longest run of his career.

Dallas' defense did the rest, allowing 87 yards from Los Angeles in the second half.

“It’s incredible to watch,” Rush said of Dallas’ defense. “They’re able to do a lot because of how they communicate, how smart they are, all three levels. We get to see that in practice every day itself, so to get to see that on game day, what we deal with, it’s very fun.”

Jalen Ramsey got the first sack of his seven-year NFL career in the third quarter when the Cowboys left him unblocked on a blitz. The Rams' All-Pro defensive back never had a sack in his first 95 regular-season games and nine playoff contests.

The Cowboys missed the extra point on Lawrence's touchdown because new long snapper Matt Overton hit holder Bryan Anger in the head with the ball while Anger was looking elsewhere. Overton, who was on the Rams' practice squad last month, is replacing Jake McQuaide, who's out with a torn triceps muscle.

Cowboys: Prescott said he can grip a ball with his surgically repaired thumb, but noncommittally called himself “day to day." He hailed the victory: “A game like this, it wasn't the prettiest, but the defense and the special teams did what they had to do to win.” ... Parsons was limited in the second half by a groin injury, but he plans to play next week.

Rams: LG David Edwards left the game in the fourth quarter for a concussion evaluation after colliding with Lawrence. Edwards missed last week's game in the concussion protocol. ... S Taylor Rapp sat out with injured ribs.

Cowboys: At Philadelphia next Sunday night.