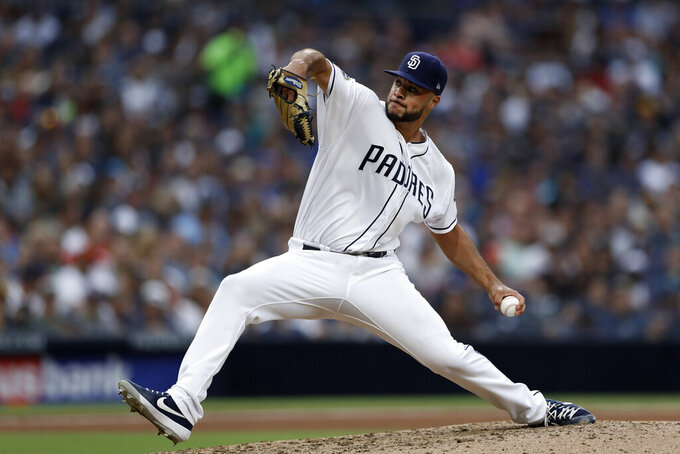 SAN DIEGO (AP) — Josh Donaldson and the Atlanta Braves have opened the second half at full speed.

Donaldson hit a two-run homer in the first inning and then scored the go-ahead run on Ozzie Albies' single with one out in the 10th, and the Braves held on for a 7-5 victory over the San Diego Padres on Saturday night.

The game was full of big plays, particularly in the late innings for the Braves, who won for the fifth time in six games.

Manager Brian Snitker said the win ranks "Right up there. Especially here. That was an exciting game. A very exciting game. It was a big win for us."

By taking the first two games of the three-game set, the Braves won a series in San Diego for the first time since 2011.

"It's definitely one of those momentum games you take going into the second half," Newcomb said. "Coming out winning two games and winning one like that definitely gives us a boost."

Donaldson, who scored three runs, started the winning rally when he drew a leadoff walk against Luis Perdomo (1-2). He advanced on Markakis' groundout and scored when Albies singled to right. Tyler Flowers added a two-run double.

Donaldson hit a two-run homer in the first and has three homers and six RBIs in the two games here. Ronald Acuna Jr. homered for the second straight night.

Donaldson "plays with emotion," Snitker said. "That was a big walk. He's had some really, really good at-bats. He's an emotional guy and wants to win really bad. He plays with a lot of emotion and that's good. He fits right in here."

Luke Jackson struggled to get his 16th save. He allowed Manny Machado's second homer of the game with one out in the 10th and loaded the bases with two outs before striking out Perdomo on a full-count pitch to end it.

With two runners on, Markakis made a nice catch of Francisco Mejia's drive to the right-field wall.

"I thought it was out when he hit it," Snitker said.

Machado hit his 22nd homer in the first and his 23rd in the 10th. Mejia also homered.

The Padres "gave ourselves a chance there at the end, finally put some good at-bats together consecutively late in the game," Green said. "Just not enough solid hard contact.

"I think you just look at the story of the game for us from a pitching perspective. Leadoff walks in innings crushes us. It crushes every team. Those are things we can't do if we're going to be a good baseball team. We did that three times today and it cost us."

Padres All-Star Kirby Yates blew the save when he allowed Austin Riley's sacrifice fly for a 4-all tie in the eighth. Yates came on after Gerardo Reyes issued a leadoff walk to Donaldson, who advanced on Markakis' single and Albies' grounder before scoring on the sac fly.

Yates was trying for his first six-out save.

San Diego went ahead 4-3 with two outs in the seventh when Manuel Margot stole home after Tatis broke for second and drew a throw to first from left-hander A.J. Minter. First baseman Freddie Freeman's throw home was high and Margot slid in to score, but was stepped on by catcher Tyler Flowers. Margot stayed in the game. Tatis had been intentionally walked.

After Mejia homered leading off the fifth to tie it at 2, the Padres went ahead without the benefit of another hit. Margot followed with a walk and advanced to third when Flowers had a passed ball and threw wildly for an error while trying to get Margot at second. Julio Teheran hit Greg Garcia with a pitch and then allowed a sacrifice fly by rookie pinch-hitter Josh Naylor.

Acuna tied it with a two-run shot off Craig Stammen with two outs in the seventh, his 23rd.

Donaldson gave the Braves a 2-0 lead with his shot to right-center off left-hander Joey Lucchesi that was estimated at 400 feet. It was his 21st.

Machado hit a line shot to left estimated at 413 feet with two outs in the bottom of the inning.

Teheran allowed three runs, two earned, and three hits in six innings while striking out six and walking one.

QBS IN THE HOUSE

Drew Brees of the New Orleans Saints and Russell Wilson of the Seattle Seahawks were at the game. Brees and his family have an offseason home in the San Diego area.