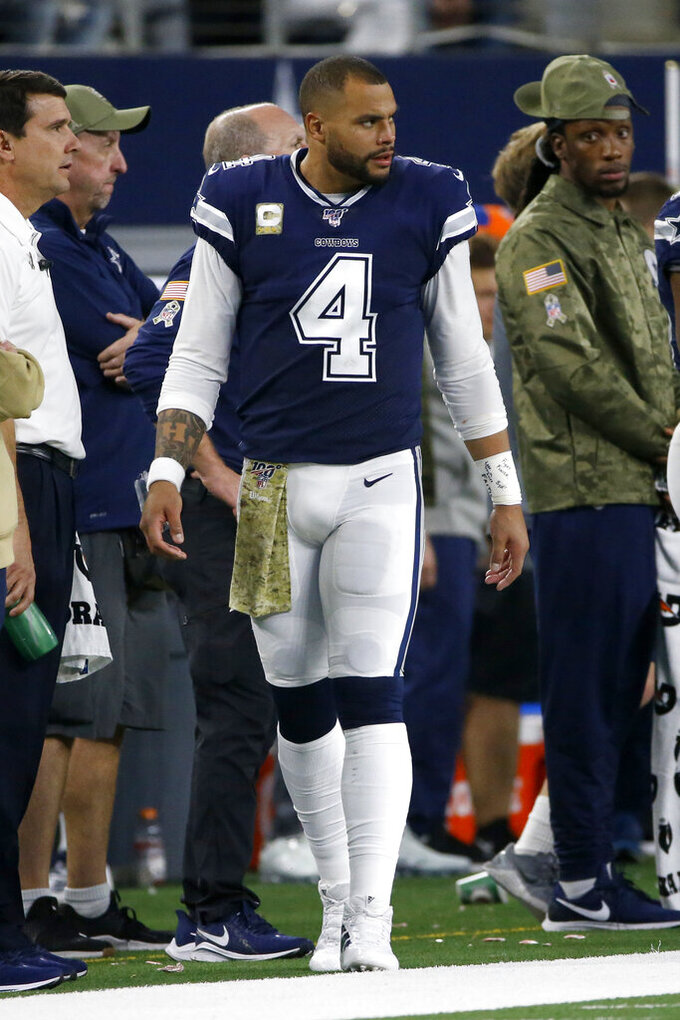 Dallas Cowboys quarterback Dak Prescott (4) watches from the sideline during the second half of the team's NFL football game against the Minnesota Vikings in Arlington, Texas, Sunday, Nov. 10, 2019. (AP Photo/Ron Jenkins)

FRISCO, Texas (AP) — Dak Prescott didn’t figure to be the next offensive star of the Dallas Cowboys caught up in MVP chatter, even though the quarterback edged running back Ezekiel Elliott in NFL Offensive Rookie of the Year voting three years ago.

The two-time Pro Bowler was always seen as the steady hand guiding an offense fueled by a two-time rushing champion in Elliott, except that now he’s the NFL’s leading passer for the No. 1 offense heading into a meeting with Tom Brady and New England (9-1) on Sunday.

“I’ve never been a stat guy,” Prescott said Thursday. “I care about one stat, and that’s wins. For me it’s about focusing on that. Sure, all of that stuff is cool. Don’t get me wrong. It’s cool.

“It’s cool to look up and see that many yards and see this and that, but I just want to help this team win and give us the best opportunity each and every week, week in and week out. And if it means throwing for that amount, I’ll do it.”

Start with 1,098 yards passing over three games, beating the franchise record for that span set 9 years ago by Tony Romo (1,064).

In 2016, Prescott was a forgotten third-stringer behind Romo and Kellen Moore when injuries to both thrust him into the starting role. Romo never got his job back and retired. Moore is Prescott’s offensive coordinator now, after a year as his QB coach.

With Elliott an also-ran in the rushing race coming off consecutive games of less than 50 yards for the first time in his career, Prescott tops the league with 3,221 yards passing and is tied for second with 21 touchdowns.

While the Cowboys (6-4) would probably need a winning streak for Prescott to get serious MVP consideration, crazier things have already happened. The QB known as a “game manager” needs just one more 400-yard game to tie the NFL record of four in a season.

Among the quarterbacks holding the mark? A pair of Hall of Famers in Peyton Manning and Dan Marino. Oh, and they’re former MVPs as well. Not that MVP talk means anything to Prescott, who had 397 yards passing in another game this season.

“Not at all,” he said. “One, it’s crazy early, right? And two, I mean, as I’ve talked about, it’s wins. The only thing I care about is wins. So if that means I’m the most-winningest quarterback in the league, sure, I’ll want it. But until it means that, I don’t care.”

There were hints that Prescott’s impact on the offense could grow. He has talked since training camp about how reading defenses became easier last season, and first-year quarterbacks coach Jon Kitna, a former Romo backup, challenged him to think more aggressively.

With the fresh perspective of Moore’s play-calling, Prescott has transformed from an afterthought in the deep passing game around the league to the NFL leader with 47 completions of at least 20 yards.

“I think Dak’s playing well, but I think Dak has played well for a long time around here,” coach Jason Garrett said. “He’s growing as a player. His comfort level and his experience with our receiving corps allows him to continue to play at a high level.”

Prescott and Elliott have made the playoffs twice in three seasons together, earning the top seed in the NFC by leading the Cowboys to a 13-3 record as rookies. They got their first playoff victory last season.

When Dallas missed the playoffs in 2017, the list of reasons started with Elliott’s six-game suspension over domestic violence allegations, which sparked a three-game losing streak that ultimately doomed the postseason hopes.

All along that path, it went without saying that Dallas had a run-first offense.

The defenses for Minnesota and Detroit certainly treated it that way the past two weeks, never letting Elliott run for more than 8 yards at a time. Meantime, Prescott averaged 9.1 yards per attempt, 18% above his career average.

“I mean, I wouldn’t say I’m too impressed,” Elliott said. “That’s who he is. That’s the type of player he is, the guy he is, the leader he is and he’s continuing to attack. He hasn’t let up, as we expect from Dak. He’s continued to attack and be himself.”

Statistically speaking, Prescott hasn’t quite been himself. He’s been better.