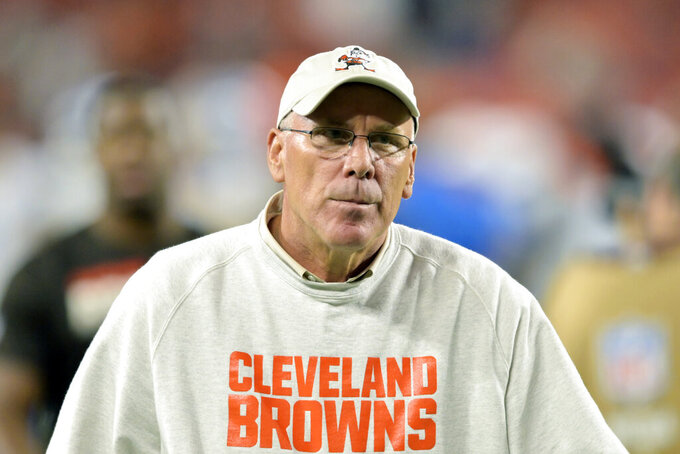 CLEVELAND (AP) — The Browns ended 2019 the same way they began the year — coach-less and some would argue clueless as well.

Dorsey, who in two years turned around a roster that went 0-16 in 2017 to one loaded with talent, left after refusing to accept a reduced role in the organization offered by owner Jimmy Haslam. So, once again, Haslam and his wife, Dee, are restructuring the team's front office while saying goodbye to another GM.

And while Dorsey's exit has added another layer of disarray, the Browns will interview former Green Bay coach Mike McCarthy for their vacancy on Thursday, a person familiar with the team's plans told the Associated Press.

McCarthy's interview will be the first in Cleveland's search, said the person who spoke on condition of anonymity because of the sensitivity of the discussions.

Dorsey had successfully revamped the Browns during his two seasons, but his hiring of Kitchens a year ago backfired as the Browns won one fewer game in 2019 and fell way short of expectations while missing the playoffs for the 17th straight season — the NFL's longest current drought.

In a prepared statement, the Haslams thanked Dorsey for his efforts and applauded him for creating a foundation “we need to continue to develop and build upon.”

The Haslams acknowledged Dorsey had “greatly” improved the team's talent, but the Browns' failure to reach their potential this season necessitated more change.

“As the role of the general manager continues to evolve in this league we felt there were areas that needed to be reassessed,” they said. "Over the last 48 hours, we’ve had discussion with John about his role but could not come to an agreement on a position that would enable him to remain with the organization.

“As we conveyed on Sunday and our players reiterated yesterday, bringing in a strong leader with our head coach is our priority. Our process to improve upon the leadership will allow the flexibility to ensure we create the best partnership between our future head coach and general manager."

It's another blowup by the Haslams, who are perfecting the tear down. They've been unable to find any continuity since buying the team from Randy Lerner in 2012, firing five coaches and five lead football executives in the seven-year span.

It's unclear what impact Dorsey leaving will have on the roles of chief strategy officer Paul DePodesta, assistant GM Eliot Wolf or vice president of player personnel Alonzo Highsmith. Wolf and Highsmith were brought to Cleveland by Dorsey.

Earlier in the day, the Browns postponed a scheduled news conference with Dorsey, with the team saying it was pushing it back until Thursday because of the New Year's holiday and meetings about the coaching search.

However, there was much more taking place as Dorsey was being pushed aside after just two years on the job. When he came to Cleveland, Dorsey promised to “awaken the sleeping giant” that is the Browns.

He was barely able to stir them.

“When I took this job, the history of this storied franchise and the passion of our fans was an integral part of my decision," Dorsey said. "It is that same understanding and desire to see these fans enjoy the success they are so deserving of that helped me conclude, along with Jimmy and Dee, that it was best to part ways as they embark on the search for a new head coach.

"I know how critical the relationship is between a general manager and head coach and I also know how critical it is that the Browns have a strong leader in their next coach. I have a great appreciation for the men and women I have worked with since being in Cleveland and my family has the same love and appreciation for this community and are thankful for the opportunity to be a part of this journey.”

Dorsey joined the Browns in December 2017 after previous stints in Green Bay and Kansas City and he immediately began overhauling a roster lacking quality and a front office with no direction. With Dorsey calling the shots, the Browns went from 0-16 in 2017 to 7-8-1 in 2018.

Dorsey made several astute moves and his decision to draft quarterback Baker Mayfield No. 1 overall in 2018 looked like a winner when the QB broke the league rookie record for touchdown passes. Then, Dorsey pulled off a blockbuster trade last March by acquiring star wide receiver Odell Beckham in a trade with the New York Giants.

The Browns were a chic pick to make the playoffs this season, but Mayfield regressed in his second year under Kitchens, whom Dorsey favored over other candidates a year ago despite his lack of head coaching experience. Cleveland was also among the league's most penalized teams and the season crashed in the final weeks with Kitchens paying the price.

Dorsey also failed to bolster Cleveland's offensive line after perennial Pro Bowl left tackle Joe Thomas retired, and some of his draft picks didn't pan out. Still, he left the Browns better than he found them.