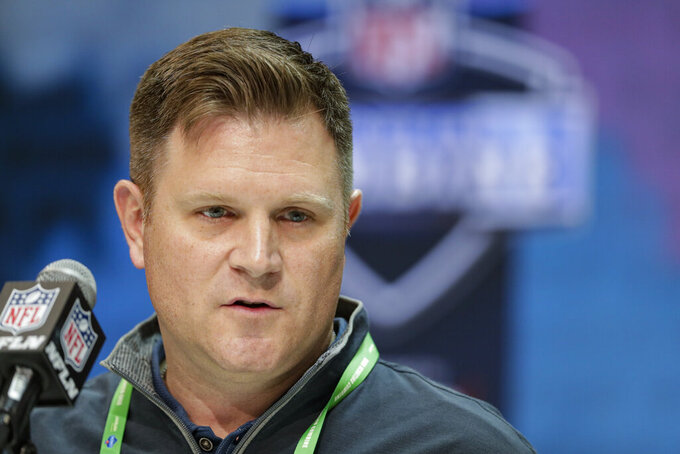 FILE - In this Feb. 25, 2020, file photo, Green Bay Packers general manager Brian Gutekunst speaks during a press conference at the NFL football scouting combine in Indianapolis. The Packers would love to give quarterback Aaron Rodgers more weapons as they attempt to make at least one more Super Bowl run with the 36-year-old, two-time MVP. That doesn’t necessarily mean you should pencil in a receiver to Green Bay with the 30th overall pick in the NFL Draft. (AP Photo/Michael Conroy, File)

The Green Bay Packers would love to provide quarterback Aaron Rodgers more targets as they attempt to make at least one more Super Bowl run with the 36-year-old, two-time MVP.

That doesn’t necessarily mean you should pencil in a receiver to Green Bay with the 30th overall pick.

Pro Football Hall of Famer Gil Brandt, a SiriusXM Radio analyst who spent nearly three decades as a Dallas Cowboys executive, says, “This is one of the deepest classes that I can remember at that (wide receiver) position.” Former Tampa Bay Buccaneers general manager Mark Dominik, also a SiriusXM Radio analyst, says he’d be surprised if the Packers took a receiver in the first round.

“I would think more second or third round is where they’re going to want to take a swing possibly there,” Dominik said.

Three-time Pro Bowl selection Davante Adams is the only Packer who caught at least 50 passes last season as Green Bay won the NFC North before losing to the San Francisco 49ers in the NFC championship game. The Packers believe plenty of receivers in this draft could contribute immediately.

“In today’s day and age where these guys are starting 7-on-7 (drills), it’s almost like AAU basketball, receivers are so much more advanced as far as their fundamentals coming into college and the league, maybe, than they have been in the past,” general manager Brian Gutekunst said during the NFL scouting combine. “It’s really just the NFL offenses that will take time (to learn). I think there are some guys sitting here today who I think will have a chance to make a pretty immediate impact.”

Since the combine, the Packers lost receiver Geronimo Allison but signed Devin Funchess in free agency. Funchess caught at least four touchdown passes in each of his first four NFL seasons but played just one game last year with the Indianapolis Colts before going on injured reserve with a broken collarbone.

NFL Network draft analyst Daniel Jeremiah says he has 22 receivers with grades suggesting they’re worth taking in the first three rounds. Jeremiah noted that over the last five years, an average of just 11.8 receivers have been selected among the top 100 picks.

So the Packers can afford to wait on a receiver, as they’ve generally done over the years. Green Bay hasn’t selected a receiver in the first round since taking Florida State’s Javon Walker with the 20th overall pick in 2002.

But they also might find an ideal wideout available at No. 30.

“I just think it comes down to whether or not they’re in love with one of those guys,’’ Jeremiah said. “Tee Higgins (of Clemson) to me is kind of an interesting one who I think would fit them really well, trying to get somebody to give them some big plays down the field. If they want to add some speed, there will be plenty of those guys a little bit later if they want to wait.’’

Here are some things to know about the Packers as they prepare for next week’s draft:

The Packers haven’t used a first-round pick on an offensive player since taking Mississippi State tackle Derek Sherrod with the 32nd overall selection in 2011. Last year, the Packers selected Michigan outside linebacker Rashan Gary and Maryland safety Darnell Savage with their two first-round picks. Green Bay used its first three picks on defense in 2018 and its first four selections on defense in 2017.

The Packers know they must do a better job of stopping the run after allowing 285 yards rushing in the NFC championship game. Green Bay entered the offseason with inside linebacker as a major need and still must get better at that spot after signing Christian Kirksey but losing Blake Martinez in free agency. The Packers also must find more help on the defensive line.

It might be time to start grooming an eventual replacement for Rodgers. His current backup is 25-year-old Tim Boyle, a 2018 undrafted free agent who played at Connecticut and Eastern Kentucky.

The Packers have at least one pick in each of the seven rounds but will be particularly busy in the draft’s latter stages. Green Bay has three sixth-round picks and two seventh-round selections.