Driskel benched, Broncos fall to 0-3 after loss to Bucs 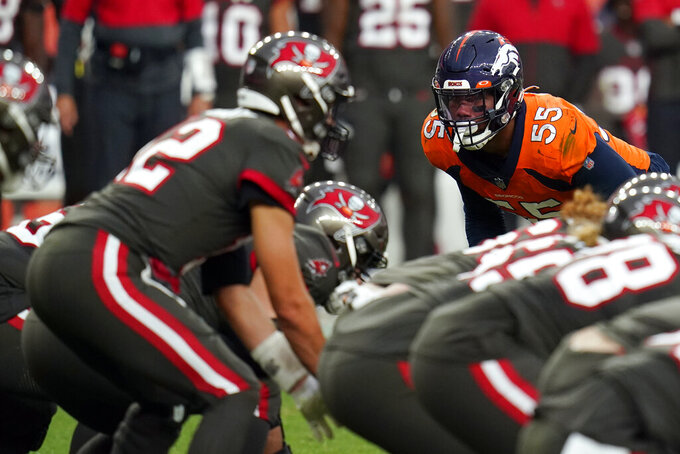 That pretty much wraps up how the day went for the struggling Denver Broncos, who fell 28-10 to Brady and the Tampa Bay Buccaneers on Sunday.

For the second straight season, the Broncos start 0-3.

For the second straight September, coach Vic Fangio went winless, which is something no other coach in the Broncos’ history has done. His team was 0-4 in the month last season.

It wasn't pretty in any facet for the Broncos as Brady picked up his first road win for the Bucs (2-1). It's been a rough stretch for the Broncos, who are missing quarterback Drew Lock, standout pass rusher Von Miller, top receiving threat Courtland Sutton and running back Phillip Lindsay.

Stepping in for Lock, Driskel was under constant duress. He was sacked five times, including twice by former Bronco and reigning NFL sack leader Shaq Barrett. Driskel finished 17 of 30 for 176 yards, one TD and an interception. He was also tackled in the end zone by Barrett for a safety.

In the fourth quarter, Driskel got pulled in favor of Brett Rypien, who was activated off the practice squad Friday.

Rypien completed eight straight passes to start his NFL career. His ninth was complete as well — only to safety Mike Edwards in the end zone to thwart a drive.

“Wish we could have gotten that one back and got the touchdown,” said Rypien, who's the nephew of longtime NFL quarterback Mark Rypien. "I think I’ve made some big strides as far as understanding defenses better and knowing when to get the ball out.”

The Broncos have a full-fledged QB controversy — on a short week, too. They play on the road against the Jets on Thursday.

The options: Stick with Driskel, turn to Rypien or trot out recently signed Blake Bortles, who may not be fully up-to-date on the system but does have 103 touchdown pass — along with 75 interceptions — on his resume.

Fangio didn't tip his hand after the game.

“We’ll talk about it as a staff and move forward,” he said.

It was out of Driskel's hands, so he wasn't going to dwell on it, either.

This wasn't the start the Broncos envisioned: A blocked punt after their opening drive stalled. Tampa Bay's Patrick O'Connor burst through the middle, stuck out his hand while being held and deflected Sam Martin's kick.

Brady was in business at the Denver 10 yard line. Three plays later, he found Chris Godwin for the score.

“It’s never good, obviously,” Fangio said of the special teams breakdown. “We had a chance to hold it to only a field goal. We needed to do that on defense and didn’t get that done.”

"At the end of the day, my job is to get to the quarterback and I just have to do that better," pass rusher Bradley Chubb said. "It’s frustrating, but we just have to forget about it and bounce back.”

The message was that simple.

“We are not where we can be,” guard Graham Glasgow said. "Frankly, that is a case for optimism, but at the same time the reality of the situation is that we are underperforming and we’re underachieving and that’s something that we need to work through as a group and as an offense.”

“Three games doesn’t define your season,” Chubb said. "We just have to keep sticking together, fighting for each other, and go out there and make the plays we’re supposed to make.”