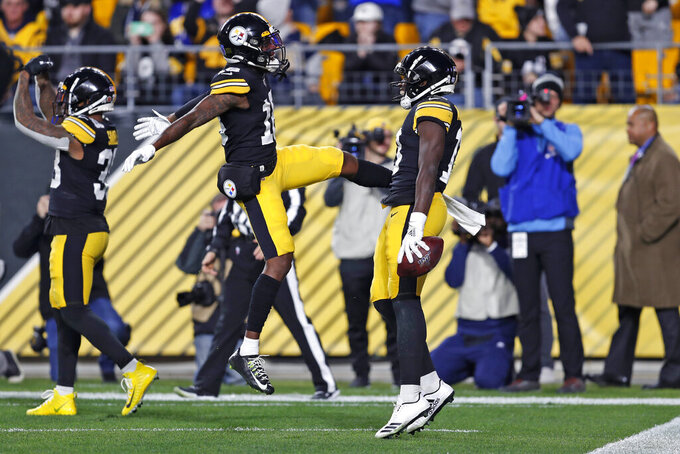 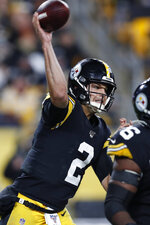 PITTSBURGH (AP) — Vance McDonald should have been pumped.

Thrilled. Yet he wasn't. He couldn't be.

As his Pittsburgh Steelers teammates celebrated around him following a 17-12 victory over the Los Angeles Rams on Sunday, the veteran tight end stewed.

Yes, the Steelers had pushed their winning streak to four when safety Minkah Fitzpatrick hauled in the clinching interception in the final seconds. McDonald, however, would have preferred if his team wasn't forced to sweat it out. Yet it had to thanks in part to a pair of dropped passes and a fumble by McDonald. The sting of the miscues lingered inside an otherwise giddy locker room.

"It doesn't feel good," McDonald said Tuesday. "I was unhappy. It shouldn't feel that way, because we won."

Wide receiver JuJu Smith-Schuster and running back Jaylen Samuels also couldn't come down with balls that smacked off their hands, would-be receptions that would have extended drives. And a pretty 34-yard catch-and-run by James Washington ended in nightmarish fashion when he was stripped shortly after extending his right arm — which had the ball in it at the time — in an effort to direct the blocking in front of him.

For an offense still searching for a rhythm under starting quarterback Mason Rudolph, those kinds of missed opportunities can be costly. The fact they haven't been while the Steelers (5-4) have emerged from a 1-4 start is a testament to a dominant defense that is second in the league in takeaways (26) and third in sacks (33) heading into Thursday night's visit to Cleveland.

McDonald and the rest of the offense know it's time to start helping the defense if Pittsburgh wants to entertain any ideas of reaching the postseason.

"We've got to execute," McDonald said. "Especially when the defense does the performance that they did, we've got to close games out as an offense."

Measuring drops is an inexact science. So is determining what is and isn't catchable. Yet the Steelers understand their margin for error isn't as big with Mason Rudolph replacing the injured Ben Roethlisberger. Roethlisberger led the NFL in attempts, completions and yards passing in 2018 while throwing to a group that included Antonio Brown.

Fast forward 12 months and Roethlisberger is recovering from season-ending right elbow surgery and Brown is in self-induced exile after burning through three teams in six months. The Steelers are 23rd in pass attempts this season, meaning there are fewer chances for playmakers to make plays, magnifying the importance of every mistake.

"We threw the ball a lot last year," offensive coordinator Randy Fichtner said. "Everyone knew they were going to get an opportunity. It was going to present itself in every series. And the running backs knew that at the right appropriate time if they weren't catching it, they were getting an opportunity to run it. It's been a little bit different."

Out of necessity more than anything else. Injuries have already forced the Steelers to use three starting quarterbacks, five running backs and four tight ends.

There hasn't been much stability at wide receiver either. Donte Moncrief, a high-profile addition after Brown forced a trade to Oakland, was cut earlier this month following a nightmarish two months in which he plummeted down the depth chart following a handful of costly drops, including one that directly led to an interception in a Week 2 loss to Seattle.

McDonald caught a pair of touchdowns in the second half against the Seahawks after Rudolph came in for Roethlisberger, but he's been only sporadically involved since.

"We have big plans for everybody, in general," Fichtner said. "The road kind of winded left and then right and left and right and up and down."

While Rudolph continues to take weekly steps in the right direction — he threw for 242 yards and a touchdown without a pick against the Rams — the players need to do a better job of helping him out. That means sticking to your job, something McDonald admitted can be difficult when things aren't going well.

"For receivers, yeah you will run routes in a way you should not run them because you so badly want to make a play," McDonald said. "I know for me at least that kind of happens. Your spacing is off. Your timing is off. Things like that do happen for football players especially."

Rudolph stressed he isn't concerned. Asked what he does to make sure his receivers don't lose confidence, he shrugged.

"With drops, I might slap 'em on the butt," he said. "But we've got a lot of great receivers. Got a lot of great playmakers. But everyone's human. I make bad throws. Sometimes we don't catch the ball. That happens and we move forward."

The Steelers need to do it quickly if they want to continue their mastery over the Browns. The team didn't practice Monday and had a 90-minute workout on Tuesday. On a short week, there's no time to hang out at the JUGS machine in an effort to get right.

Their head coach, a former wide receiver at William & Mary, has no sympathy. His advice: catch the ball.

"Guys have got to make plays when given an opportunity," Mike Tomlin said. "They're receivers. So, if you spend a lot of time talking to receivers about receiving, you've got problems."