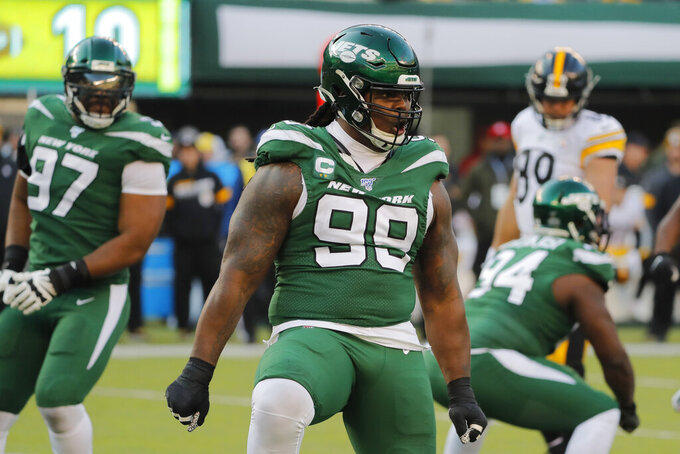 FILE - In this Dec. 22, 2019, file photo, New York Jets nose tackle Steve McLendon (99) celebrates in the second half of an NFL football game against the Pittsburgh Steelers, in East Rutherford, N.J. A person with direct knowledge of the move says the New York Jets have agreed to terms on a trade that sends veteran nose tackle Steve McLendon to the Tampa Bay Buccaneers. The deal that was agreed upon Sunday night, Oct. 18, 2020, will reunite McLendon with Buccaneers defensive coordinator Todd Bowles, who was the Jets' head coach from 2015-18. (AP Photo/Seth Wenig, File)

The 11th-year pro was acquired in a trade from the winless New York Jets last weekend. He practiced with his new team for the first time Friday and will play Sunday when the first-place Bucs travel to Las Vegas to face the Raiders.

McLendon expects a smooth transition because he’s already familiar with defensive coordinator Todd Bowles’ scheme from the time Bowles spent as a coach of the Jets. He has also worked in the past with defensive line coach Kacy Rodgers.

“With that said, you basically just hone in on the playbook and the transition makes itself easy,” the former Jets captain added. “You just do your job, continue to communicate, don’t be afraid to ask questions, and just go out there fly around and have some fun with it.”

The Bucs (4-2) were in the market for experienced help after losing nose tackle Vita Vea to a season-ending leg injury on Oct. 8. They acquired McLendon and a seventh-round draft pick in 2023 while sending a 2002 sixth-rounder to the Jets, who played at Miami last Sunday.

“Steve’s a great human being and a heck of a player,” Bucs coach Bruce Arians said. “He jumped in a car and came straight here, had some clothes shipped in and will head to Vegas and get about 20 or 30 snaps, hopefully.”

What didn't become public knowledge until Friday, though, McLendon played his final game for New York despite learning the night before he was being traded to Tampa Bay.

The Bucs prearranged transportation for McLendon, a move that helped the player get a headstart on clearing COVID-19 protocol while getting a refresher course on Bowles’ defense via virtual meetings.

“I got the news on Saturday night, a car would be waiting for me after the game. ... Sunday morning, I woke up, I prayed and .... I told my boys: ‘It’s one last ride together,” McLendon said.

“A lot of guys were saying: `Man, are you really gonna play?’ I was like: ‘Man, this could be the last time I play with y’all in my career, so let’s go out here and make it a great one. Let’s go have some fun.'”

“Even though we lost, it was some good football played between us. When it was over, it was very emotional because I made a lot of great friends there,” McLendon said.

“The biggest thing is, I’m here now ... and it’s a great, great opportunity to come and be part of an organization that wants you at this age,” McLendon said. “I do realize what happened with Vita Vea. He’s a great player. I’m just happy to be here and eager to get on the field with these guys and continue to help them make that run for the championship.”

Meanwhile, Arians said the Bucs are preparing to face the Raiders as scheduled on Sunday, although the game has been shifted from prime-time television to an afternoon start in the wake of the Raiders having five players placed on the COVID-19 list.

“As far as we know, everything is good to go. ... I think the guys love playing on Sunday night, so it’s a disappointment that way. But, hey, we’ve got to play the game,” Arians said.

The coach said he had not yet discussed the matter with players, but that as a precaution he is leaning toward not allowing the Bucs to shake hands or mingle with the Raiders when the game ends.

“Just to be cautious,” Arians said. “Playing the game is one thing, but the mingling and all that stuff after the ballgame, I’ve not talked to our guys but I don’t think we’ll do that, just to be safe.”