Eagles draft all about offense 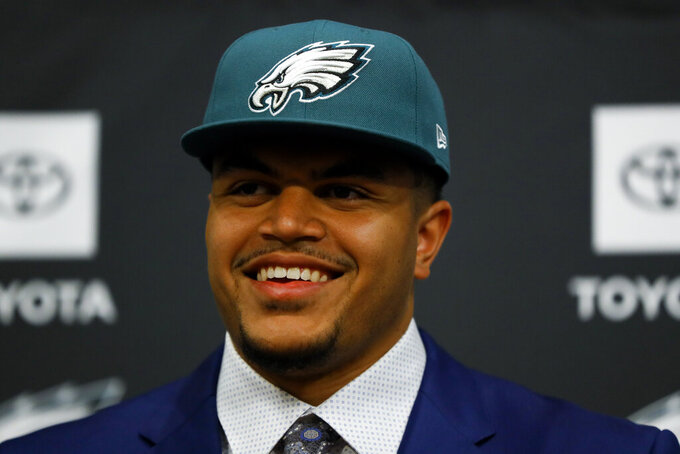 The Eagles took offensive players with four of their five picks in the NFL draft, passing up needs on defense to select the best players available to help them improve an offense that ranked 18th in scoring last year.

They got their only defensive player on the final day of the three-day draft, choosing Penn State edge rusher Shareef Miller in the fourth round on Saturday.

Offense was the focus the first two days when the Eagles moved up three spots to select Washington State left tackle Andre Dillard with the 22nd pick in the first round. Penn State running back Miles Sanders was drafted in the second round at No. 53 and Stanford wide receiver JJ Arcega-Whiteside at No. 57.

"The way we've built our team, we want to score a lot of points and we want to make teams one-dimensional and get after the quarterback," personnel boss Howie Roseman said. "That's how we build this. That's going to be how we continue to do it, but at the same time we are not trying to force anything."

Dillard isn't expected to contribute right away, barring injuries. He'll learn behind nine-time Pro Bowl left tackle Jason Peters, who is 37 years old. But Sanders will be counted on to make an immediate impact.

Sanders had 1,274 yards rushing, an average of 5.8 yards per carry, and nine touchdowns as a junior last year after replacing Saquon Barkley.

"I gained a lot of patience, got more mature, started focusing on the little things more, got bigger, stronger, faster, got deeper into the playbook, just preparing myself and making myself feel comfortable for when I finally get my chance to get in the game," Sanders said about waiting for an opportunity to play. "And then also learning from Saquon, he's a special guy on and off the field, so it's just stuff like that I was just learning from him as far as how to watch film, what he looks for, just to prepare myself for when I finally get my chance."

"He texted me right after I got picked," Arcega-Whiteside said of Wentz. "Obviously, he is a great quarterback. He throws the ball very well. It almost seems like he always makes the right read. So having a guy like him to bring me in and teach me the ins and outs of the offense and knowing that he is going to put the ball on the money every single time gives me great confidence."

The Eagles concluded their draft by selecting Northwestern quarterback Clayton Thorson in the fifth round. They traded a seventh-round pick they acquired from New England to Indianapolis for defensive tackle Hassan Ridgeway.

Thorson will get a chance to develop behind Wentz and backup Nate Sudfeld. He was a four-year starter at Northwestern and threw for 10,731 yards with a 58.4 percent completion rate, 61 touchdowns and 45 interceptions.

Ridgeway started six games in three seasons in Indianapolis. He only played in five games last year because of injuries.

Taking Thorson instead of a defensive player was a surprise because the Eagles didn't address needs at linebacker and safety.

Getting Dillard, who was considered a top-12 talent, to protect Wentz's blind side for the next decade was an excellent pick. Sanders fits in nicely in the offense and Arcega-Whiteside has a chance to make plenty of plays. If Miller becomes part of the defensive line rotation, this was a strong draft.

The Eagles are always aggressive in pursuing undrafted rookies and will look to find a few gems, especially on defense.