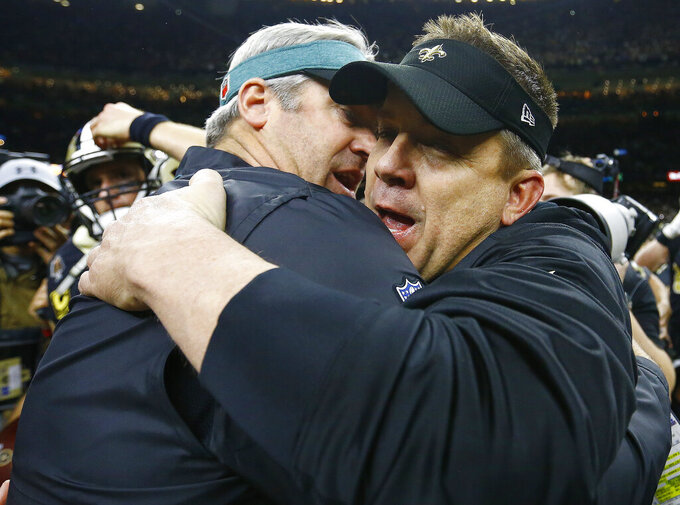 His next opportunity likely will come in a different uniform.

The Eagles (10-8) were eliminated with a 20-14 loss at New Orleans on Sunday, ending the team's bid to repeat as Super Bowl champions. The front office faces several difficult decisions in the offseason, starting with Foles.

Carson Wentz is the team's quarterback going forward and Foles is looking forward to exploring his options. The Eagles must decide by mid-February if they want to exercise a $20 million option to keep Foles for 2019. But Foles could decline it and pay back $2 million to become a free agent. Philadelphia could put a franchise tag on Foles, though $23-25 million is a hefty price for a backup.

"The starter thing, leading a team, impacting a locker room, that's why we play the game," Foles said Monday. "Everything is open. I love this city. I love this locker room. It's special. We'll see."

It's possible the Eagles could use the franchise or transition tag to trade Foles rather than allow him to walk away for only a compensation pick. Foles isn't a me-first guy and it's not unreasonable to think he would work something out that's beneficial to both sides.

"Having the option to be a free agent is extremely important," he said. "Technically, I'm really not under contract right now and that's something we'll discuss in the future. It's a unique situation, it's a good situation for this team to have. ... I have a great relationship with this team and that's genuine. Ultimately, we'll make the best decision for both sides and it'll work out."

Wentz missed the first two games recovering from knee surgery that forced him to watch from the sideline last season as Foles led Philadelphia to its first NFL title since 1960. He started 11 games before a back injury ended his season again. Wentz finished third in NFL MVP voting last season and had career-highs in passer rating and completion percentage this season.

But Foles' success in the postseason and his clutch performance down the stretch to help Philadelphia reach the playoffs as a No. 6 seed created a debate among fans and media. There is no quarterback controversy within the organization, however. Coach Doug Pederson reiterated several times Wentz is the starter when he's healthy.

"It's super frustrating," Wentz said about his injuries. "I still have zero games of postseason football under my belt. I realize I have a lot to prove in that regard. I'm confident I will get the chance to do that."

The Eagles have a lot of work to do to get back to an elite level in the NFL. They overcame several key injuries — three starting defensive backs, a starting running back and starting defensive end were among 17 players on injured reserve — and upset Chicago in the wild-card round. But their run ended against the top-seeded Saints.

The importance of earning a first-round bye — the Eagles were a No. 1 seed last year — is evident by the fact the top two seeds are meeting in the conference title games in the AFC and NFC.

Beyond Foles, management has many important decisions.

"It's tough," Pederson said about roster turnover. "You build relationships with these guys. You spend so much time together. You build your roster. Every year your roster is going to change, that is just the way that it is. There are people who are going to come. There are people who are going to go. Obviously, we will talk more about it in the next few days. We will see where we go again."