Eagles look for improvement despite big win over Jets 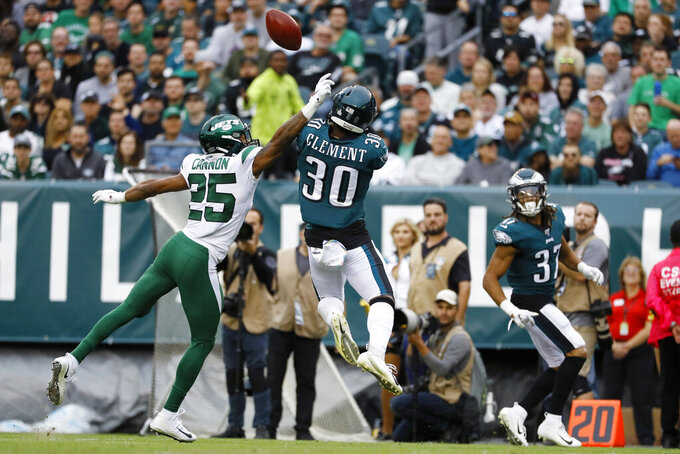 There was more talk about the offense's inconsistency than the defense's domination in a 31-6 rout of the New York Jets on Sunday. Even coach Doug Pederson pointed to some negatives.

"There are some things that we have to clean up. We just weren't in sync." Pederson said Monday. "Wins can cover up a lot of flaws, but if we continue to make the errors or the assignment errors that we did on offense, obviously as we go, we are not going to win those games. But there is definitely a lot to take away and work on moving forward."

The offense committed sloppy penalties and didn't execute well, scoring a season-low 17 points. The defense accounted for two scores and had 10 sacks.

Wentz threw for 189 yards and one touchdown and completed fewer than 60% of his passes for the fourth straight game. Drops have played a big role in that number, however. But he protected the ball again and now has 10 TDs with only two interceptions.

The Eagles (3-2) have rebounded after two straight losses with an impressive victory at Green Bay and a romp over the Jets. They're tied with the Dallas Cowboys in the NFC East.

The pass rush stepped up in a big way after getting only three sacks in the first four games. Brandon Graham had a career-high three of the team's 10 sacks and the defensive line had eight. Cornerback Orlando Scandrick had two sacks, two forced fumbles and returned one for a score. They faced a quarterback who began the season on the practice squad and an offensive line that allowed 13 sacks in the first three games.

The offense has been plagued by penalties, drops and other self-inflicted issues throughout the season. Three consecutive first-half drives that began at Philadelphia's 45 or better resulted in only one first down and three punts. One sack and three penalties wrecked each series.

Jordan Howard ran for 62 yards, averaging 4.8 yards per carry. The fourth-year pro leads the team in yards rushing (248) and average (4.7). Pederson said he expects Howard to get more carries than rookie Miles Sanders moving forward, though that plan could change quickly.

Slot receiver Nelson Agholor has only one catch for 20 yards and just four targets in the past two games. He was held up — penalty wasn't called — on a deep pass and still got wide open on one play against the Jets, but Wentz overthrew him. Agholor dropped a perfect pass in stride that would've gone for a 60-yard TD with under two minutes left in a loss at Atlanta in Week 2.

Running back/punt returner Darren Sproles is week to week with a quadriceps strain. Wide receiver DeSean Jackson remains on the sideline because of an abdomen injury. Pederson said Jackson doesn't need surgery and is getting close. He hasn't played since getting he was injured in Week 2.

2.8 — Running backs have 239 yards rushing on 84 carries against Philadelphia for an average of 28 yards per carry. The Eagles have not allowed 100 yards rushing in eight consecutive regular-season games.

The Eagles visit Minnesota in the first of three straight road games. The Vikings (3-2) won in Philadelphia last season to avenge a 38-7 loss to the Eagles in the 2018 NFC championship game.