Eagles looking for another big win in Detroit 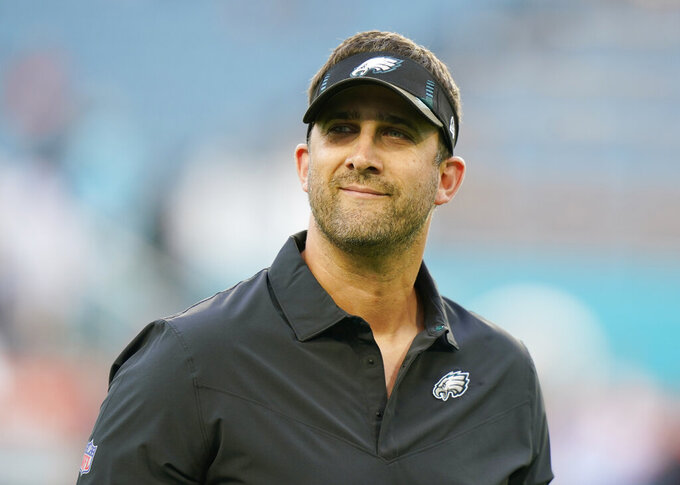 FILE - Philadelphia Eagles head coach Nick Sirianni watches his team warm up before a NFL preseason football game against the Miami Dolphins, Saturday, Aug. 27, 2022, in Miami Gardens, Fla. The Eagles and Detroit Lions both enter the season with second-year coaches, hoping to take a step forward. For the Eagles, that would mean winning at least one playoff game. For the Lions, approaching a .500 record would surpass expectations. (AP Photo/Lynne Sladky, File)

OPENING LINE: Eagles by 3 1/2, according to FanDuel SportsBook.

TURNOVER DIFFERENTIAL: Eagles even; Lions minus-4.

EAGLES PLAYER TO WATCH: QB Jalen Hurts. Hurts picked the Lions apart a year ago, completing nine of 14 passes for 103 yards and rushing seven times for 71 yards, but struggled in Philadelphia’s playoff loss to the Tampa Bay Buccaneers. With A.J. Brown as his new No. 1 target, he needs to take a significant step forward in 2022.

LIONS PLAYER TO WATCH: DE Aidan Hutchinson. The No. 2 overall pick in April’s draft grew up a few miles from the Lions practice facility and stayed in the area to have a spectacular college career at Michigan. Now he’s expected to turn around his hometown team on a defense that allowed 467 points last season — 31st in the league. There’s not much more pressure than that.

KEY MATCHUP: Philadelphia’s running game against Detroit’s defense. Last year, the Eagles led the NFL with 2,715 yards and 25 touchdowns on the ground. They got 236 yards and four touchdowns against the Lions, and if they come close to those numbers again on Sunday, they could win easily.

KEY INJURIES: The Lions thought they had one of the NFL’s top offensive lines last year, but never managed to get all five starters on the field at the same time. Nothing has changed, as they put guard Halapoulivaati Vaitai on injured reserve this week with a back injury. The Eagles come into the game in good health.

SERIES NOTES: In 1933, the first-year Eagles played their first home game against the Portsmouth Spartans, losing 25-0. The Spartans moved to Detroit for the 1934 season, but not much changed as they beat Philadelphia in the next three years by a combined score of 68-0. In 1938, the Eagles finally scored, beating Detroit 21-7. Last year’s 44-6 rout dropped the Lions to 0-8 and resulted in head coach Dan Campbell taking over play-calling duties.

STATS AND STUFF: The Eagles led the NFL in rushing yards last season despite not having a player reach 800 — Hurts led them with 784 and Miles Sanders had 754. … Lions QB Jared Goff averaged just 9.8 yards per completion last year, but did have more success later in the season. After throwing just eight touchdown passes in Detroit’s 0-8-1 start, he had 11 as they went 3-2 in his final five starts of the year.

FANTASY TIP: The Lions struggle against mobile quarterbacks, and they didn’t have any answers for Hurts a year ago. Hutchinson should help, but Hurts could be a clever play, especially in a two-QB league.