Eagles, Niners both aim for a 2-0 start 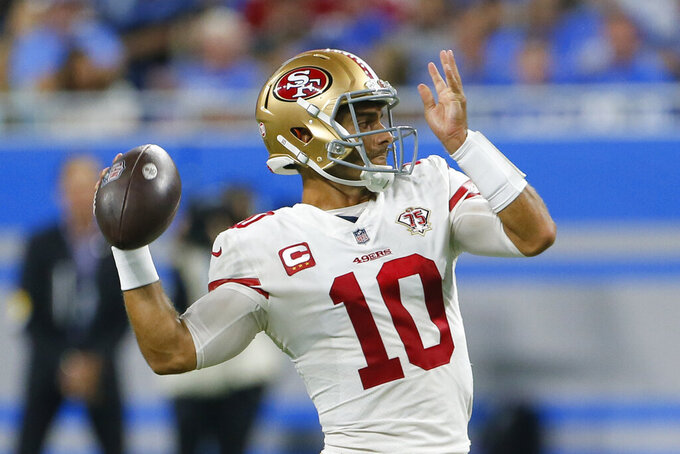 OPENING LINE: 49ers by 3 1/2, according to FanDuel SportsBook

TURNOVER DIFFERENTIAL: 49ers: minus-1; Eagles: even.

49ERS PLAYER TO WATCH: WR Deebo Samuel had nine catches for 189 yards and one TD last week vs. Detroit.

EAGLES PLAYER TO WATCH: Rookie WR DeVonta Smith had six catches for 71 yards and one TD in his NFL debut. He’s facing a secondary that lost starting CB Jason Verrett for the season to a knee injury.

KEY INJURIES: The Niners lost two starters to season-ending knee injuries in the opener with running back Raheem Mostert and cornerback Jason Verrett both going down. Eagles safety Marcus Epps suffered a concussion in the opener. Wide receiver J.J. Arcega-Whiteside injured his ankle.

SERIES NOTES: The Eagles have won consecutive games in the series and seven of the past nine matchups since 2005. ... The teams last met in Philadelphia on Oct. 29, 2017. The Eagles won 33-10 on their way to their only Super Bowl championship.

FANTASY TIP: Although the Eagles held TE Kyle Pitts to four catches last week, Kittle is a sure bet to have a productive day even if he doesn’t match his spectacular performance against Philly last season.