Eagles' playoff run goes on with Sirianni out with COVID-19 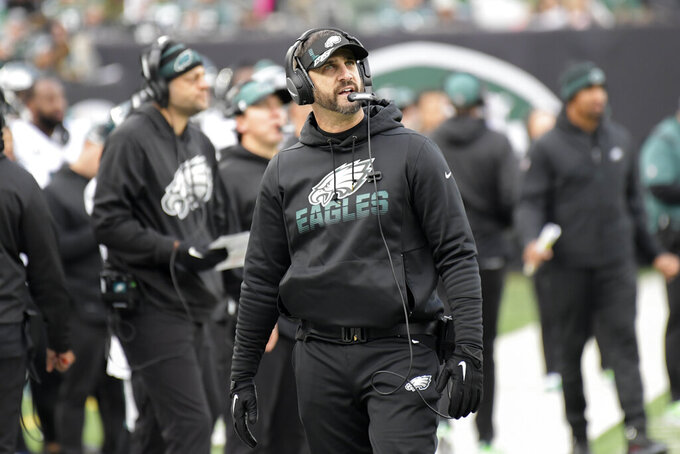 PHILADELPHIA (AP) — The Philadelphia Eagles increased their playoff hopes with a victory over virus-stricken Washington.

Now, they’ll have to prepare for the New York Giants without coach Nick Sirianni.

Sirianni’s uncertain status for Sunday’s game against the Giants (4-10) throws a curve ball to an offense that has been one of the most productive in the NFL over the past seven weeks (second in points at 29.3 and in yards at 388). The Eagles are 5-2 in that span.

“I wasn’t feeling great this morning when I woke up, and just got tested,” Sirianni said on a video conference call from a hotel room where he is quarantining. “Obviously, we are where we are right now. I’m feeling ... a little bit better now, which is good. The rest of the week, I’ll be in every meeting, obviously virtually.

Sirianni won’t be on the field with his players during this short prep week. He said practice “runs itself.” Sirianni said he hopes to be cleared to coach Sunday, but if he cannot offensive coordinator Shane Steichen will call plays while passing game coordinator Kevin Patullo will run the sideline.

“He’s super, super competitive, where at times I thought we were gonna fight on the practice field, but he knows how to connect with the players ... he’s a good football coach,” defensive coordinator Jonathan Gannon said of Patullo.

The previous time the Eagles prepared on a much shorter week, they played poorly in losing to Tampa Bay on a Thursday night in October.

“We’ve made tweaks (to practice scheduling) after our Tampa game,” Sirianni said. “I want to see how everybody feels, after we get together with the medical staff.”

The run game. The Eagles ran for 238 yards on 41 carries against Washington. It was their seventh game in a row with more than 175 rushing yards, a feat last accomplished by the 1985 Walter Payton-led Chicago Bears. The Eagles have the NFL’s No. 1 rushing offense.

The Eagles have given up 10 touchdown passes to tight ends, and a Washington TD was set up by a completion to a tight end who was tackled just short of the goal line. Pass coverage by linebackers and safeties remains a key shortcoming. The pass rush, up and down, was mostly up against Washington.

Against Washington, running back Miles Sanders became the first Eagles player with back-to-back 100-yard rushing games since LeSean McCoy in 2014. Sanders has bounced back well after missing three games with an ankle injury. Quarterback Jalen Hurts overcame an early interception and fumble to author his most efficient passing game as a pro: 20 for 26 for 296 yards and a touchdown.

Rookie Kenny Gainwell, who has shown promise as a dual-threat running back, dropped the only pass thrown his way Tuesday and did not get any carries.

Reserve OT Le’Raven Clark joined the reserve/COVID-19 list, which includes Dickerson and OL Andre Dillard. Had the Eagles practiced Wednesday, the team estimated that OT Jordan Mailata (ankle) and Sanders (quad) would have sat out.

8 — That’s where the Eagles rank in the NFC. There are only seven playoff spots, so they have to outperform seventh-seeded Minnesota or other contenders in the final three weeks. The Eagles and Vikings are 7-7, but Minnesota has a better record against common opponents. Minnesota has a tougher schedule with games at home against the Rams (10-4) and at Green Bay (11-3) before finishing at home against the Bears (4-10).

New Orleans also is 7-7 and hosts the Dolphins and the Panthers before finishing up at Atlanta. The Eagles have beaten the Saints, so they would win a tiebreaker. Philadelphia hosts the Giants, plays at Washington, and then is at home against Dallas.

The Eagles’ main objection to moving the Washington game from Sunday to Tuesday was that they would have to play the Giants five days later with New York having had the full week to prepare.

Philadelphia’s 13-7 loss to the Giants on Nov. 28 is the Eagles’ worst defeat of the season; a loss this week would pretty much doom playoff hopes sparked by a run of four wins in five games. The Eagles were fortunate not to suffer any devastating setbacks against Washington, but the potential for Sirianni not being on the sideline Sunday is obviously a significant obstacle.