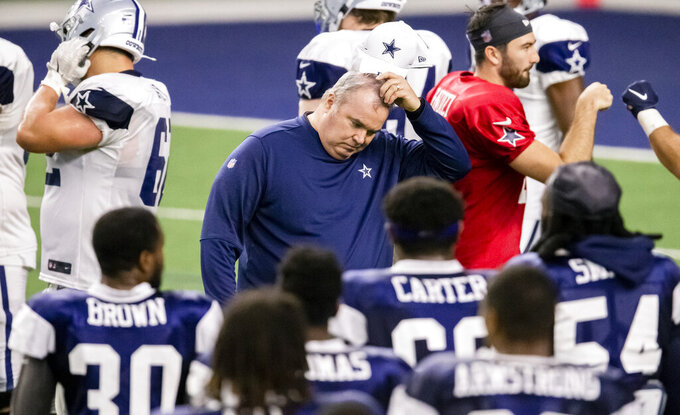 While the NFC East hasn’t had a repeat winner in 16 years, Philadelphia at least has a head start on the concept.

The defending division champion is the only team with a repeat head coach in 2020 as Doug Pederson gets ready for his fifth season.

Joe Judge is a first-time boss at 38 for the New York Giants, while Mike McCarthy takes over in Dallas after a year away from football following his firing in Green Bay. Ron Rivera didn't wait to jump back in, taking over a troubled Washington franchise after Carolina dismissed the two-time Coach of the Year midseason in 2019.

The Eagles were the most recent champs to repeat when they won a fourth straight NFC East title in 2004, the season they finally returned to the Super Bowl (losing to New England) after three straight conference championship game losses.

Philadelphia's fifth attempt at consecutive division titles since then is already facing a significant challenge because of injuries. Three-time Pro Bowl right guard Brandon Brooks (torn Achilles tendon) and left tackle Andre Dillard (torn biceps) are out for the season. Nine-time Pro Bowl left tackle Jason Peters is reportedly unwilling to move back to his old position without a pay raise after re-signing to play right guard. Current left tackle Matt Pryor has one career start, last season in the playoffs at right guard.

Carson Wentz enters his fifth season looking for his first playoff win, in part because an MVP-caliber 2017 season was cut short by a knee injury before Nick Foles led the franchise to its first Super Bowl title.

Promising first-round draft pick Jalen Reagor is a likely upgrade for the receivers if he isn't out too long because of a shoulder injury sustained in training camp. DeSean Jackson is the leader of that group alongside trusty tight ends Zach Ertz and Dallas Goedert.

“Obviously now that he’s going into his fifth year with us and understanding our system, understanding our offense, things process even faster for him,” Pederson said of Wentz. “You see him being able to translate that information and have conversations with these players. Carson is mentally in a really good state right now.”

Judge is the fifth coach in five seasons for the Giants following a 12-year run by Tom Coughlin that included two Super Bowl titles.

McCarthy, who won a championship with the Packers 10 years ago at the home of the Cowboys, replaced Jason Garrett, whose contract wasn't renewed after nine full seasons when Dallas flopped amid high expectations.

Rivera spent nine seasons with the Panthers before he was fired with a 5-7 record four years after leading Carolina to the Super Bowl.

All three new coaches faced the challenge of implementing new philosophies without any in-person time until late July because of the pandemic.

“I think you’ve really got to trust your instincts, the awareness and your experience in this particular time as far as how we install and initiate the development and growth of our program,” McCarthy said. “Every team is going to have a pretty similar amount of time in this climate that we’re in.”

Barring a surprisingly quick turnaround under Rivera, the NFL team with no nickname will make many more headlines off the field than on it.

Widespread unrest over social injustice swept up Washington as well, leading to the removal of a nickname many considered racist and insensitive toward Native Americans.

Then came reports of a toxic workplace environment that led to the NFL taking over the investigation when allegations of misconduct reached all the way to owner Daniel Snyder.

It was almost an afterthought when Rivera named Dwayne Haskins his starting quarterback a little more than a week before the opener. And besides the turmoil, Washington has had losing records eight of the past 11 years.

“Some of the guys right now, they’re struggling to get past what they’ve been through the last couple years and buy into what we’re trying to teach and preach now,” Rivera said.

Garrett is staying in the division as Judge's offensive coordinator. Troy Aikman's former backup for Super Bowl-winning teams in Dallas served in that role with the Giants two decades ago.

He inherits what New York hopes is a young franchise quarterback in Daniel Jones, and a potentially elite running back in Saquon Barkley — similar to what Garrett had in two-time rushing champion Ezekiel Elliott with the Cowboys.

Dallas quarterback Dak Prescott is coming off career passing bests in yards (4,902) and touchdowns (30). The 2016 NFL Offensive Rookie of the Year now has a coach who won a Super Bowl with a star QB (Green Bay's Aaron Rodgers) while keeping his play caller and former position coach in Kellen Moore.

The Cowboys also unexpectedly added a promising offensive threat in receiver CeeDee Lamb. They had him sixth on their draft board and got him at No. 17 in the first round. Lamb joins Amari Cooper, who just signed a $100 million contract, and Michael Gallup, looking to grow further after showing strong improvement his second year.

Then there's Elliott, who feels he has something to prove after playing a full season without winning a rushing title for the first time in his four seasons. He was among the players who tested positive for COVID-19 during the offseason.

“From Amari to CeeDee to Gallup and then obviously Zeke, none of these guys have an ego,” Prescott said. “They all want to see the other guy have success, but obviously they want to have success and it’s just going to create this amazing, fun environment. And it already has.”